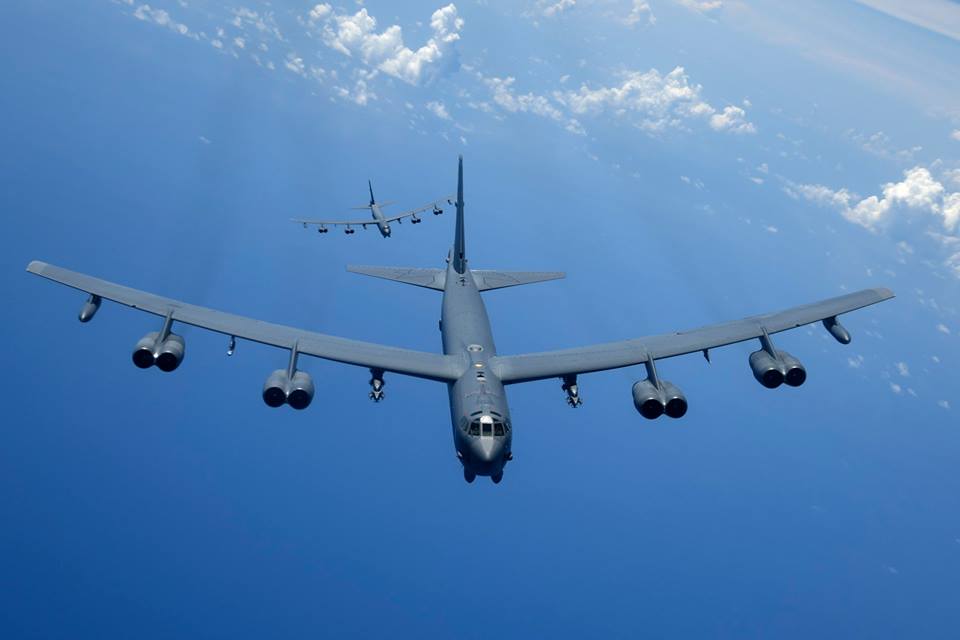 “On this first training mission, while on a navigation leg at 35,000 feet, the pilot got out of his seat for a break. This left me alone and in control of the airplane. I mentally did a little shoulder dance, reveling that I now controlled this giant bomber!,” Jay Lacklen, former B-52 pilot

I trained as a crewmember on a specific student crew as the copilot. My pilot was a pipe-smoking major who could fly well enough but had a hell of a time refueling. Had I known then what I knew much later, I could have explained it to him, but instead I had to watch him thrash and curse trying to accomplish this required task. He finally got a minimally satisfactory on our check ride, but I hope he got much better, because the time might have come where his wing’s ORI score, or his own butt, would depend upon getting the gas.

We flew our first training sortie with a senior renowned B-52 pilot, Lucky Luciano, a Lt. Col. with long B-52 experience. He had Italian movie star good looks and a mild, confident manner that made him a valued senior member of the B-52 community. Regrettably, I tested that mild confident manner on my first landing attempt. Lucky had explained extensively how, because of the structure of the B-52, the pilot must trim the horizontal stabilizer throughout the landing flare. This was necessary because the length of the fuselage compared to the relatively small and ineffective elevators on the tail required that the entire horizontal tail section be moved to provide enough aerodynamic authority to rotate the aircraft into the nose-up landing configuration. As I later explained to students when I was a Castle instructor, you must fly “into the tunnel”; that is, get right down to the runway at the approach end and then hold the plane just above the runway as the aircraft slows and you trim to rotate it to a nose-up lauding attitude.

Just above the runway, however, I panicked and forgot everything Lucky had told me. Instead of trimming, I yanked back on the yoke as you would in Any other airplane. To my dismay, and no doubt to Lucky’s chagrin, the nose hardly rose at all. We pounded into the runway with the front wheel truck and bounced a hundred feet in the air. This put us into a precarious position, since the impact had slowed us down and we didn’t have time to redo the flare before stalling and falling onto the runway. Lucky took the controls, cowling lowly, “Pilot’s airplane!” and shoved all eight throttles to the firewall for the go-around. I pressed my helmet back into the seat in chagrin at my inept performance, shades of my inadvertent no-flap approach in the T-38. Lucky had seen this before, apparently, and let me screw it up so I’d learn. I learned. Eventually I had enough self-confidence to let future students do this to me so they would learn.

Also, on this first training mission, while on a navigation leg at 35,000 feet, the pilot got out of his seat for a break. This left me alone and in control of the airplane. I mentally did a little shoulder dance, reveling that I now controlled this giant bomber! I looked down the long right wing and the four engines on two pylons and got very impressed with myself.

The next segment of the sortie took us low level to simulate penetrating the Soviet Union to drop a string of nukes on the poor Ruskies. This definitely got my blood pumping. We swooped over a ridge on a western low-level route at a few hundred feet above the ground, the desert landscape streaming by us in a blur. Lucky seemed to find nothing unusual in this, so I restrained myself from screaming, “Holy shit!” in rapturous joy at what we were doing. At high altitude, there is little sensation of speed unless clouds are about. Low level, however, the speed, three hundred knots, is very evident. Though overjoyed at what we were doing, I had some apprehension at how close the ground was. When I got to fly, Lucky told me to “keep it low” to stay “beneath Soviet radar,” so I took it back down to three hundred feet or so.

The ability to maneuver at speed is deceptive. The brain become’ accustomed to maneuvering in the base traffic pattern at relatively low speed. However, the ability to turn while screaming across the ground low level is vastly different. This became apparent flying through the spires of Monument Valley in Arizona, where many John Wayne Western movies were filmed. In my mind, I could snake through them with ease, but the additional speed made this surprisingly difficult. I was moving so fast I had to lead turns far ahead of where I thought I would need to. Of course, I was having a blast doing it. I couldn’t believe the American people paid me a generous salary to fly this huge airplane through such picturesque landscapes, to hot-rod across the desert with wild abandon, the throttles for eight powerful engines in my hand.

On another low-level run flying across eastern Wyoming, I smiled broadly as we popped over a ridge line and beheld a broad valley containing a huge herd of black Angus cattle and, on the far side, a rancher on his tractor headed away from us some three or four miles distant. I swooped down on the herd that had all its tails to us. This B-52F had the gunner in the tail with an expansive view of the terrain behind us from his bubble canopy. I approached the cattle at about half the speed of sound, a huge metal monstrosity of a bird reaming up behind them, so they had little warning until we were almost on top of them. They showed no sign of recognition of impending distress as we watched them pass under us from the cockpit. The gunner, however, reported that they broke into panicked flight in all directions after we passed over. If cattle can have heart attacks, I imagine a few of these did.

Next came Farmer Brown on his tractor. We were approaching a right turn in the route, so I swept over him and pulled the plane into a steep, turning climb to the right before diving back down close to the terrain. I don’t know if Farmer Brown viewed us with awe, terror, anger, or all three, and I worried we might hear from him for ransacking his herd, but we did not.

Later, on a low-level route out of Loring, I popped over another ridge line approaching Lake Michigan and saw a Cessna-172, like the T-41 I had flown in pilot training, directly in front and just barely above us. He was close enough to detect the pilot’s head in the cockpit. We swooshed under him so closely I thought he might come right into our cockpit, obviously with dire consequences for both of us. Regardless of how good a pilot I was or wasn’t, this would play out as fate decided. This time it spared us all to fly another day.

The night training missions were body wreckers, completely out of our established circadian rhythm. I found it impossible to sleep during the day before the 2200 takeoff time. I usually liked flying the traffic pattern to do instrument approaches and landings, but I found my body resisted on these night flights. When it realized the sun was coming up and I had not let it sleep, it revolted and down. This happened throughout my C-5 career, also after a nighttime ocean crossing. All would go well until the sun started to come up. Then I had to fight my body’s attempt to go to sleep in retaliation for what I had done to it.

After the night training missions, I’d sleep five or six hours, wake up for three or four, then go back to sleep at my normal time. While a Castle instructor a few years later, I remember twice receiving calls from Sears about an hour after I had fallen heavily into my bed to ask if I had any complaints with the vacuum cleaner I had bought from them. The first time I tolerated the call, but the second one asking the same question sent me into orbit. After that, I unhooked the phone before pulling up the covers for blissful sleep. I often joked that sleep felt so good, it was too bad we couldn’t be awake to enjoy it.