Log In Sign Up
Homepage Losses and Aviation SafetyStall and Fall! That time a C-5 Galaxy nearly crashed while approaching Diego Garcia 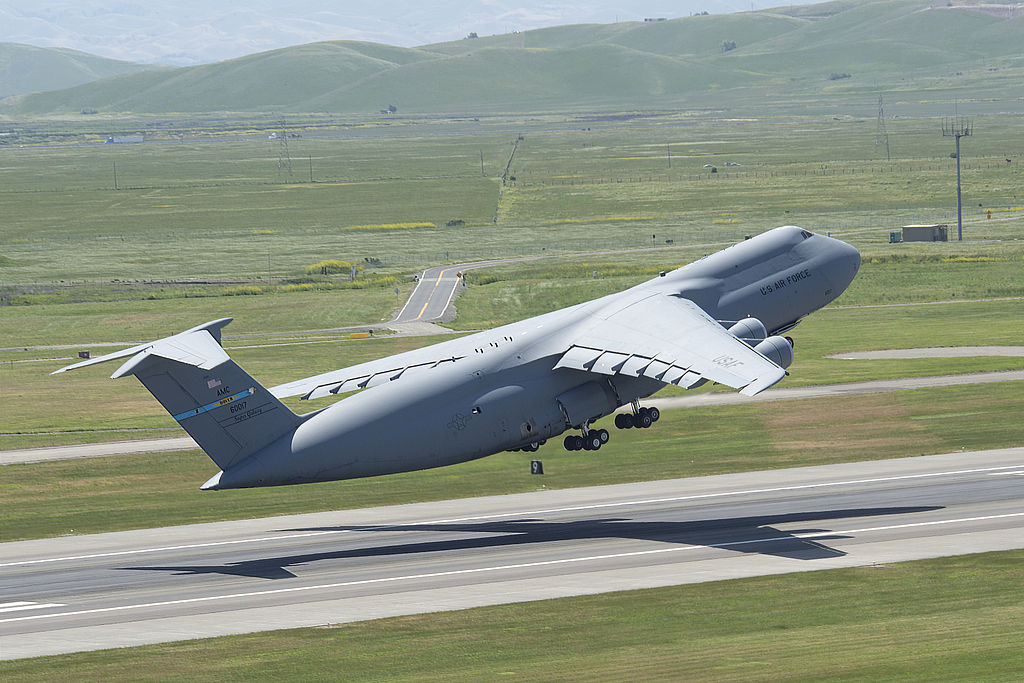 Disputes arose almost immediately since this was a reserve C-5 crew with an active duty copilot, who also happened to be female. The active duty began a campaign to claim the copilot “saved” the crew. The reserves countered by pointing to possible copilot missteps.

In the summer of 1998, a Dover reserve crew C-5 experienced a stall and fall on approach to the tiny atoll of Diego Garcia in the middle of the Indian Ocean.

I sat on the initial crew debriefing after they had returned to Dover AFB. Disputes arose almost immediately since this was a reserve crew with an active duty copilot, who also happened to be female. The active duty began a campaign to claim the copilot “saved” the crew. The reserves countered by pointing to possible copilot missteps. This detracted from the process to discover what happened, and why, and to develop procedures to ensure it didn’t happen again.

The crew arrived at Diego at night and in generally visual conditions. However, the only clouds for 100-miles enveloped them as they configured and approached the Final Approach Fix (FAF) for the landing runway.

A mechanical problem also occurred at the same time. The “target” pads on the wing slats (forward wing segments) did not seat properly during their extension positioning. The crew got an annunciator warning of this and the flight engineer sent the scanner to visually observe the slats. Crucially for the developing situation, this malfunction disabled the stick-shaker stall warning system on the pilots’ yokes. The system never warned the crew they were in the deep stall that was approaching.

The pilot started configuring by calling “Flaps 40,” and shortly thereafter, “Gear down.” The configuration proceeded normally until the slat annunciator illuminated. Then confusion arose with the pilots about their instrumentation centering on the Inertial Navigation Systems (INSs) as they extended full flaps. The copilot called the pilot’s attention to this and he seemed to agree that something was amiss.

At this point the pilot was in level flight and had advanced the throttles to hold his airspeed instead of beginning descent. Apparently, he became focused on what was wrong with his INS.

One reserve theory of the time claimed the copilot did not recognize slow flight and alerted the pilot to an erroneous problem. But a video which appears on Aviation Performance Solution dispels that theory.

When she told the pilot he was climbing, instead of descending, she was correct.

The copilot tells the pilot at 1:10 minute point on this video to descend since they are configured and past the FAF.

At 1:12 the pilot becomes concerned about some apparent instrument problem. Instead of descending to maintain airspeed, he increases power. At 1:17 the copilot asks “what’s up with our…?” At this point the pilot is level flight and with low, but acceptable, airspeed. This is where the inappropriate climb begins.

It is unclear if the pilot feels his ADI is unreliable, or if he is checking for error codes on his INS. Regardless of the reliability of his ADI, the airspeed dropping and altitude increasing shows he is climbing.

At 1:20 the copilot correctly states “you’re showing like a 10-degree climb.” At 1:26 the copilot asks, “What’s up with our INSs?” The pilot responds, “I don’t know,” with concern in his voice. The nose continues to rise. At 1:30 the copilot says, “That’s not good,” apparently about the condition of the INSs, as the airspeed falls below 100 kts. This is followed almost immediately by the copilot saying “Your climbing, you don’t want…” At 1:35 the copilot says, with rising emphasis: “accelerate, accelerate.” The pilot acknowledges with “Yeah,” but the throttles do not move from the low 80% N1 range.

At 1:38, the pilot seems to decide something is definitely wrong and calls emphatically for “Gear up.” I presume he is initiating a missed approach, but the throttles do not move initially. This may have saved their lives since the gear was up as they recovered seconds later over the lagoon with little room for error.

At 1:42 the copilot calls for TRT, twice in rapid succession as the N1 is at 85%. After initial hesitation, the pilot starts the throttles forward.

At 1:46 the stall begins at 50 kts IAS. There is no stall warning due to the slat malfunction. At 1:52 it is apparent the plane is in trouble. The copilot calls for TRT with urgency but the pilot already has the throttles near 100%. The female flight engineer adds that there is more power available even though the N1 is at or near 100%. The plane attains its highest altitude of the event at 4,900 ft.

At 1:55 the aircraft is in full stall and has lost almost 1,000 feet. The copilot calls for the pilot to “Put the nose down. Reportedly, the pilot is holding full back pressure since there is no stick shaker warning of the stall. This keeps the plane firmly in the stall. At 1:58 the airspeed has remained at 50kts for the previous 15 seconds. The aircraft is in a near 90-degree right bank. The copilot warns “Watch the (engine) temperatures! You’re climbing!” Actually, the aircraft nose is now falling through level flight in a full stall.

At 2:06, the aircraft is 10-degrees nose low, in a 90-Degree left bank and passing through 3000 feet. There is silence on the interphone. I asked the crew at the initial interview why no one was speaking. The copilot answered, “We were all saying our prayers.”

At 2:14 the aircraft is back in a right bank of 110-degrees and passing through 2,000 feet, but the airspeed has increased to 105 kts. Aerodynamic control is returning. The shrill Ground Proximity Warning System (GPWS) activates as the ocean surface approaches. Shortly thereafter the plane emerges from the cloud. The tower said the two wing tip lights were vertically aligned and reminded them of a weather balloon as it rises into the sky.

Passing through 1500-feet the crew regains visual conditions. The copilot frantically calls for the pilot to “Put the nose down! You’ve got altitude to work with!” This was the perfect advisory telling the pilot he had enough altitude to lower the nose to gain airspeed.

The Angle of Attack (AOA) indicator is at 16-degrees nose high. The pilot has only two degrees of AOA to work with. Above 18-degrees he will induce another, this time fatal, stall. The pilot pulls perfectly to 18-degrees AOA, the airspeed increases to 150-kts. The recovery is established at 2:27 at 733 feet above the lagoon surface.

The crew’s initial analysis of the event blames wind shear. This was no doubt prompted by a lack of stall warning throughout the fall from 4900-feet to 1500-feet. The tower asks (farther along in the tape, not provided here) if they want to return to attempt the approach again. The pilot states emphatically, “I’m not going back there!”
This seems to confirm the necessity for one pilot to fly the airplane while the other investigates potential problems. The aircraft commander needs to specify who is flying and who is investigating.

The aftermath got ugly as the reserve and active duty wings got into a squabble about whose fault the episode had been. The active duty wing lauded the copilot, but she left the cockpit with a pregnancy soon thereafter.

The reserve pilot suffered a different fate. The wing decided to put him up for a Flying Evaluation Board (FEB) that investigates the incident, interrogates him, and has the authority to remove his wings and flying status. I found this unnecessarily severe based on the fact the stall warning system had failed. I saw this malfunction three or four times in over twenty years flying the C-5, but never in instrument conditions. I fully understand why they initially thought they had encountered wind shear since the stall warning never activated. In addition, the copilot had made a sterling call of available altitude as they came out of the clouds, and the pilot pulled expertly to the edge of a second stall to recover.

However, this pilot flew in my old squadron, the 709th, that I had left ten years previously, so I did not know him or his record. There might have been other issues in his past I was not aware of that the squadron considered. Regardless, the squadron scheduled the FEB. Prior to the board, they made the pilot an offer. If he resigned, he could keep his wings. If he did not, he would risk them at the FEB. Since he flew for a civilian airline, he would still have a full-time job if he quit. Further, the thought of his airline finding out he lost his Air Force wings might bring further sanctions. I presume this weighed on him. He resigned. 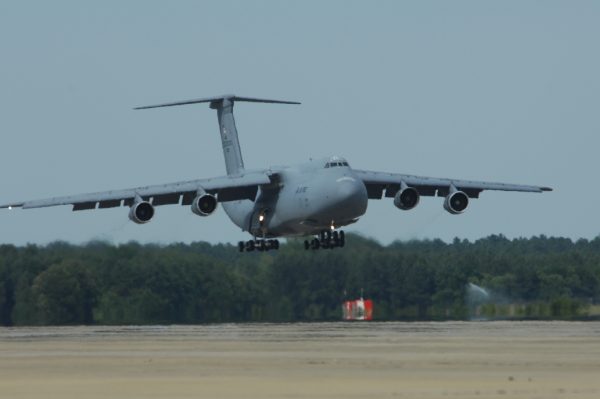