Log In Sign Up
Homepage Aviation HistoryWhen a US Navy EP-3 collided with a Chinese J-8 interceptor: the Hainan incident and the last flight of Lt. Cdr. Wang Wei 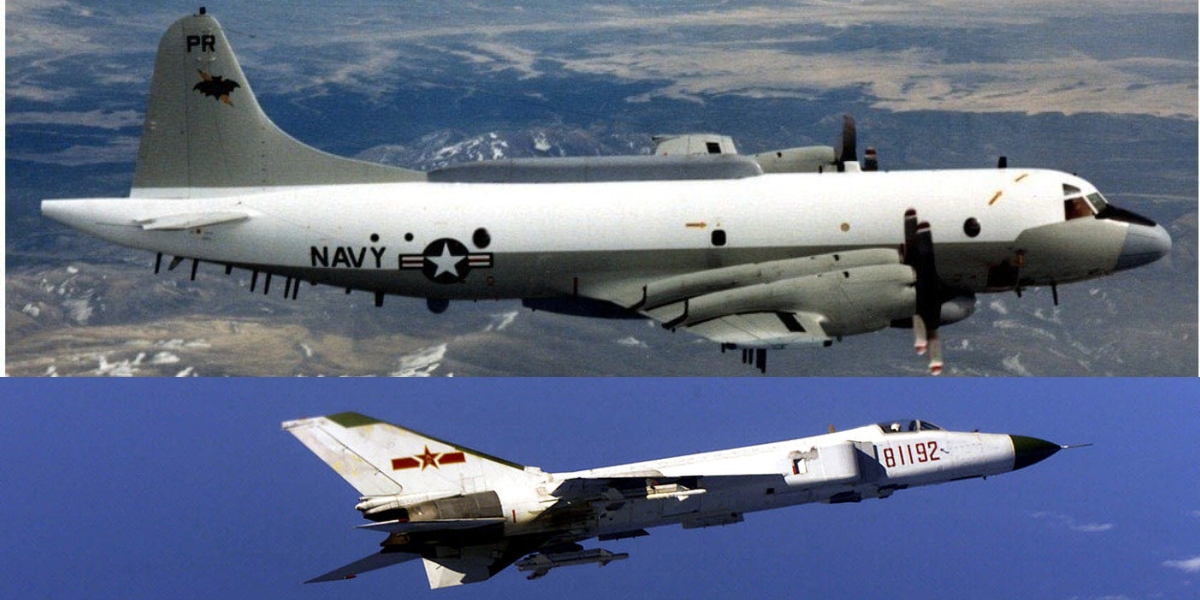 When a US Navy EP-3 collided with a Chinese J-8 interceptor: the Hainan incident and the last flight of Lt. Cdr. Wang Wei

The Chinese J-8 interceptor and its pilot, Lt. Cmdr. Wang Wei, were lost while the damaged US Navy EP-3 made an emergency landing on Hainan Island.

On Apr. 1, 2001, a US Navy EP-3E Aries II (BuNo 156511), assigned to VQ-1 collided with a People’s Liberation Army Navy (PLAN) J-8II interceptor over the South China Sea, 110 km off Hainan island. The Chinese jet and its pilot, Lt. Cmdr. Wang Wei, were lost while the damaged US plane made an emergency landing on Hainan Island. The crew destroyed as much classified material as possible before landing.

This incident would prove to be not only the last flight of Wang Wei-but also the first step in the creation of a mythic figure.

According to an article appeared on Air Force Magazine on Jul. 1, 2001, Wang, thought to be 33 years old, was a squadron leader in the 8th PLA Naval Air Force Wing’s 22nd Regiment, based at Lingshui.

Wang was no stranger to intercepts, as a video of an aerial encounter that took place on Jan. 24, 2001 made public in Washington proved. During the flight he flew dangerously close to another EP-3E: his J-8 was shown flying to within 20 feet and slowing its speed to the point where it was having difficulty flying with the EP-3E. The Chinese military too confirmed US suspicions that Wang and another pilot were flying the two J-8s involved in the Jan. 24 incident.

On Apr. 1, 2001 the 23 crew members of the EP-3E carried out their duties, most of them conducting electronic vacuum cleaning of all communications along China’s coast while US Navy Lt. Shane Osborn had his aircraft on autopilot, flying level at around 180 knots airspeed.

“We were obviously being intercepted,” said Osborn, “and the [Chinese] aircraft was approaching much closer than normal, about three to five feet off our wing. So, I was just guarding the autopilot, listening to the reports from the back end and from my other pilot, Lt. [Patrick] Honeck, who was in the window watching the aircraft approach.”

Osborn went on, “The aircraft made two close approaches, [with the pilot] making gestures. And then, on the third one, his closure rate was too high, and he impacted the No. 1 propeller, which caused a violent shaking in the aircraft. And then, his nose impacted our nose, and our nosecone flew off, and the airplane immediately snap-rolled to about 130 degrees in low bank and became uncontrollable.”

Osborn told CNN he had had “eyeball-to-eyeball” contact with Wang: “I did on the second time he joined up on us. He came out a little bit front and was making gestures, and we could all see him.” What kind of gestures? “I don’t care to comment on that,” Osborn said.

He later recalled, “He had his oxygen mask off and was waving us away and mouthing some words.” However, he could not tell what Wang was saying.

Lt. John Comerford, the EP-3E crew member who got the best look at Wang’s deadly flying, told CNN. “I was actually out of my seat and kind of down on my haunches, looking out of the port side, left side, over-wing exit window at the fighter as it approached. I was taking notes on a clipboard about the condition of the flight and things like that and was watching the approaches that he was making to our plane.” Comerford was thrown backward by the collision and pinned to the ground as the aircraft rolled over.

China told a very different story. Zhao Yu, who piloted the F-8 next to Wang gave this account in Liberation Army Daily:

“I saw the head and left wing of the US plane bump into Wang Wei’s plane. At the same time, the outside propeller of the US plane’s left wing smashed the vertical tail wing of the plane piloted by Wang Wei into pieces. I reminded Wang Wei, ‘Your plane’s vertical tail has been struck off. Pay attention to remain in condition, pay attention to remain in condition.’ Wang Wei replied, ‘Roger.’ About 30 seconds later, I found Wang Wei’s plane was rolling to the right side and plunging. The plane was out of control. Wang Wei requested to parachute. I replied: ‘Permission granted.’ Afterward, I lost contact with Wang Wei.”

The Chinese government claimed that the EP-3E slowed down to make it difficult for the jets to fly alongside, to shake the intercepting aircraft. Liberation Army Daily also stated that the surveillance aircraft would make sudden movements. “The wild and arrogant planes also often jumped up and down and suddenly turned steep left and right to provoke the pilots of our side again and again with extremely dangerous actions.”

Osborn rejected China’s claim that the EP-3E suddenly turned and rammed Wang’s jet. “It’s not very common for a big, slow-moving aircraft to ram into a high performance jet fighter,” he said. “And we definitely made a sharp left turn. That was called uncontrolled flight-inverted in a dive after he impacted my propeller and my nose.”

According to Osborn and other Pentagon officials, Wang was preparing to “thump” the EP-3E by flying in front of the slower aircraft and hitting his jet’s afterburners. The maneuver is an unfriendly gesture designed to disrupt the flight of the target aircraft. But he didn’t get the opportunity to do any thumping because the airplanes collided. Osborn’s initial reaction to the collision was matter-of-fact. “The first thing I thought was, ‘This guy just killed us,’ ” he recounted later, noting that he remembered looking up and “seeing water” close up-an unhappy sight for any pilot.

“He was joining up on us and had too high of a closing rate, and instead of going low, he went up,” Osborn said in an interview while he was spoking of the ordeal and the encounter with Wang. “He could have shot underneath us and never hit anything.”

Zhao Yu said he flew to within about 9,000 feet of the sea and spotted the wreckage of Wang’s airplane, along with a flight seat stabilizing parachute and a rescue parachute “floating in the air.” At about 9:30, Zhao landed at Lingshui and the damaged EP-3 arrived at about 9:40.

The Chinese government’s search effort was massive, according to both US and Chinese accounts. The operation lasted about 10 days and covered more than 52,000 square miles of water. Some 110 aircraft, more than 100 warships and at least 1,000 other ships, including salvage vessels, fishing boats, and civilian boats took part, along with more than 55,000 people.

The Chinese refused to allow the plane to be flown from the island, forcing the U.S. pay to have it dismantled and shipped. The Chinese also charged the U.S. $34,567.89 to pay for 11 days of food and lodging supplied to the 24 crew members.

Wang’s death instead was exploited by the Communist government in Beijing, which launched a propaganda offensive to deify the dead fighter pilot and harangue the United States, all under the rubric of battling “hegemonism”–Beijing’s word to describe US power and influence in the Pacific. 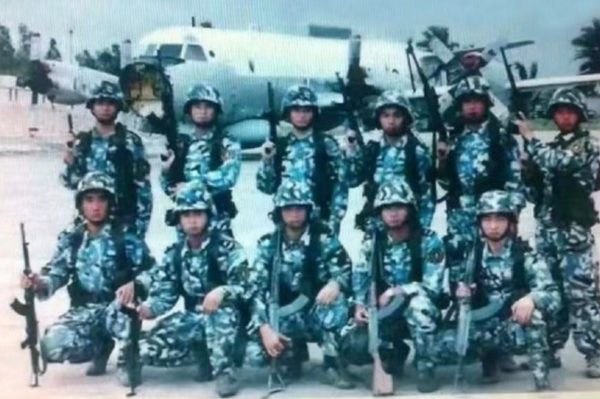 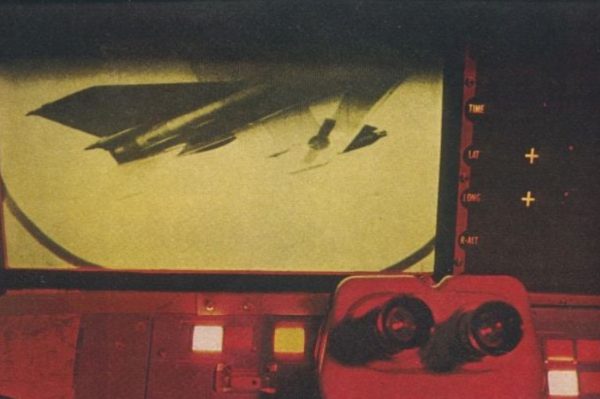