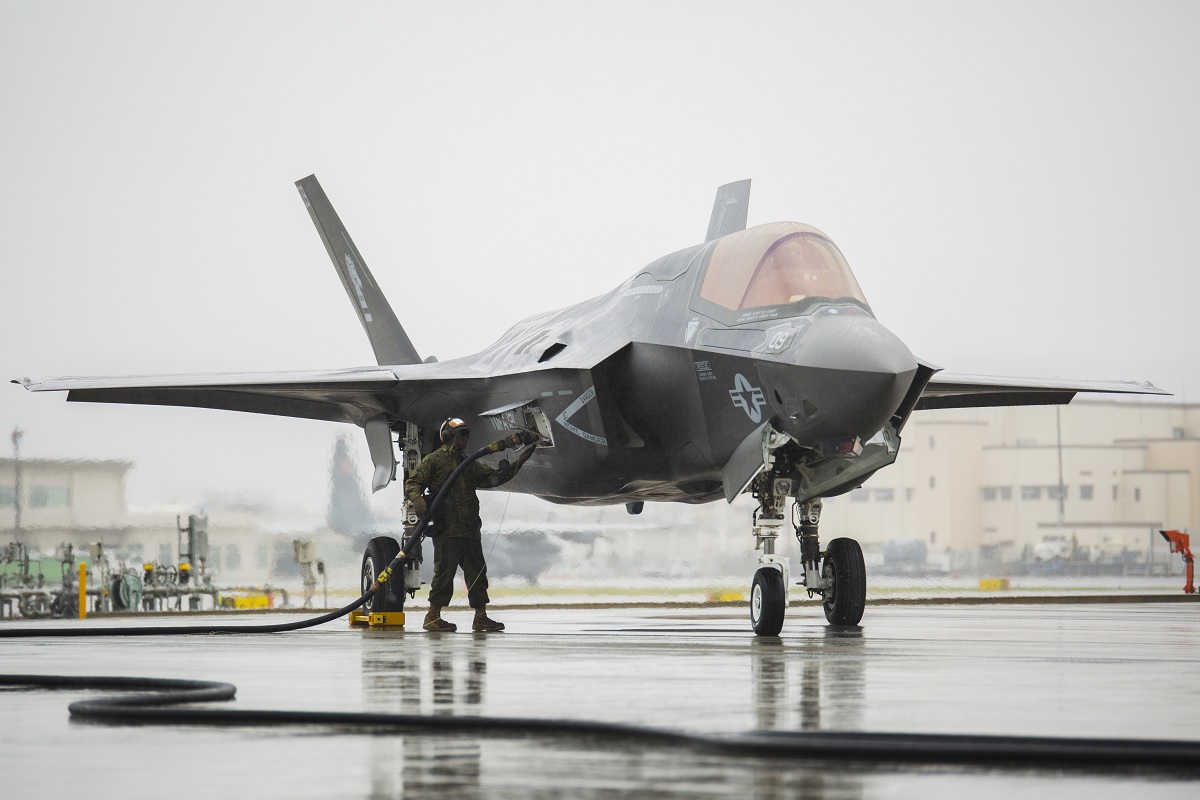 As explained by Lance Cpl. Joseph Abrego in his article VMGR-152, VMFA-121 fuel capabilities, the ADGR marked the first evolution of this form of refueling for VMFA-121’s F-35B Lightning II stealth jets.

The training was aimed to establish flow rates of fuel in gallons per minute distributed by KC-130J Hercules to the F-35B Lightning II aircraft, to see how fast the process would be if used in a real-world scenario.

“It felt great to be a part of today’s refueling, it was surreal,” said U.S. Marine Corps (USMC) Lance Cpl. Keon Willingham, a powerline mechanic with VMFA-121. “Being able to participate in the first ADGR with the F-35 is something I can look back on and be eager to tell stories about.”

In fact successfully completing the ADGR is a milestone that increases the capabilities of the unit, offering the ability to refuel by C-130 aircraft in austere locations when other resources aren’t available.

“I’m going to take away how multi-face this operation was,” explained USMC Cpl. Matthew Schoon, ordnance technician with VMFA-121. “We had to deal with different components from the pilot in a running F-35, to a running KC-130 and Marines from VMGR 152. There was a lot of communication, and I had to keep my head on a swivel the whole time. That’s something I’ll be able to apply in any situation.”

Even if the Marines with both squadrons faced issues with the climate, the weather didn’t stop them from accomplishing their tasks.

“The weather played a big factor in the training today with safety, visibility and communication,” pointed out Schoon. “Training with the engines on the aircraft still running made it very hard to hear so we had to use hand signals. The rain made visibility with eye protection on difficult, so we had to ensure we were being thorough and making safety a priority.”

As told by Willingham the ADGR has been a crucial to improve VMFA-121 deployment capabilities: “Completing this training is a huge confidence boost for us. Being the first to successfully complete this training and being able to do so safely, gives everyone involved the state of mind that they can accomplish anything. We will continue to train, and we will improve anywhere we can.”

As we have previously explained, on Jan. 18, 2017 VMFA-121 F-35Bs have been the first U.S. Lightning II to be relocated in Japan. Currently the unit has deployed 10 F-35Bs at Marine Corps Air Station (MCAS) Iwakuni with six more scheduled to arrive within this year.