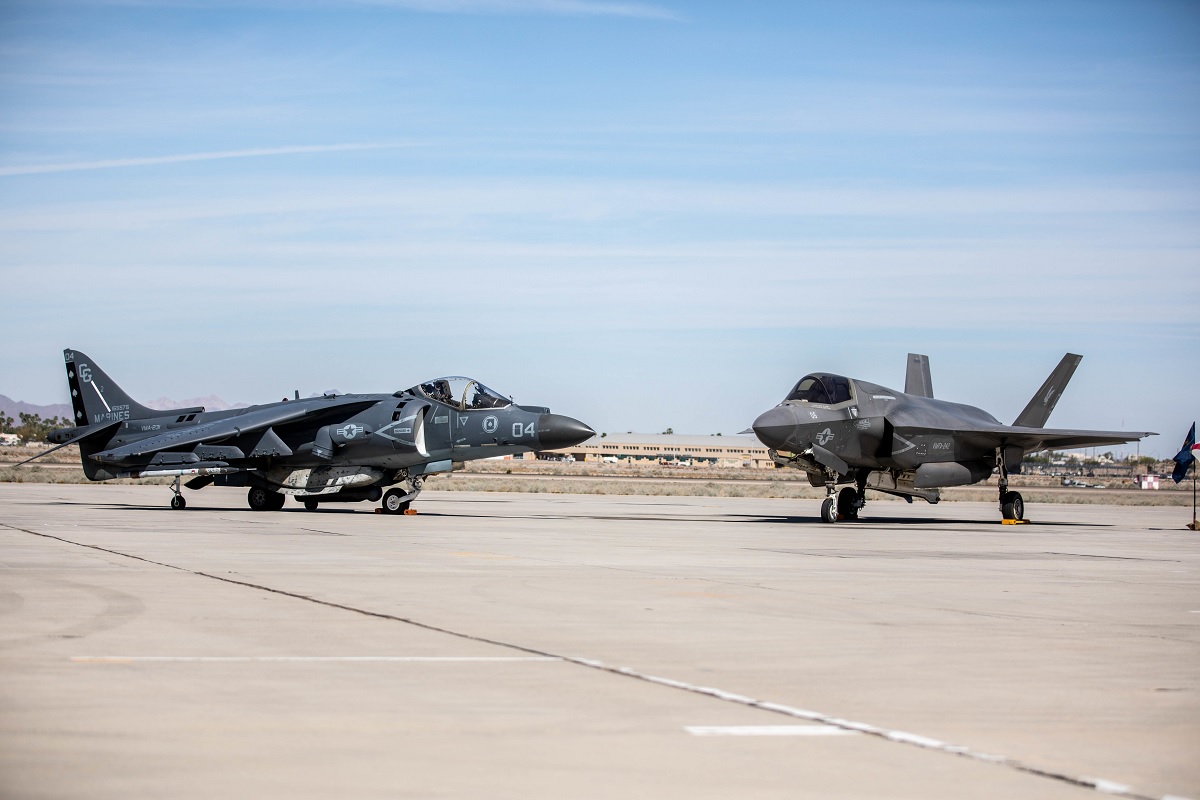 As part of the transition from the AV-8B Harrier to the F-35B Lightning II, VMA-214 was re-designated as VMFA-214.

According to the article Marine Attack Squadron 214 Transitions to the F-35B by 1st Lt. Zachary Bodner and Lance Cpl. Courtney Robertson 3rd Marine Aircraft Wing, as part of the transition from the AV-8B Harrier to the F-35B Lightning II, VMA-214 was re-designated as Marine Fighter Attack Squadron (VMFA) 214. The F-35B Lightning II is replacing the AV-8B Harrier to introduce unmatched capabilities to the Marine Corps. The F-35B Lightning II represents a leap forward in air dominance by providing the operational agility and tactical supremacy Marines need to provide expeditious and lethal support.

Thanks to the F-35B for the first time in aviation history, supersonic, radar-evading stealth comes with short takeoff/vertical landing (STOVL) capability. The F-35B has unequaled basing flexibility and advanced network-enabled mission systems that provide unprecedented multimission capability across the spectrum of operations and is an essential enabler for other forces in the battlespace. The F-35B redefines the multirole fighter.

Increasingly, modern security challenges require wider distribution of forces and capabilities across a range of scenarios. STOVL capability gives the F-35B the unique capability to operate from a variety of ships, roads and austere bases near frontline combat zones, greatly enhancing sortie generation rates. The unmatched basing of the F-35B – ashore and afloat – provides more employment flexibility in any scenario.

“Having previously served in VMA-214 and flown the AV-8B for many years, the Black Sheep and the Harrier hold a special place in my heart,” said US Marine Corps Maj. Gen. Bradford J. Gering, the commanding general of 3rd Marine Aircraft Wing. “As 3rd MAW says a bittersweet farewell to the Harrier, we are excited to increase our number of F-35B squadrons with the re-designation of VMFA-214.”

VMA-214 was initially commissioned as Marine Fighter Squadron (VMF) 214 on July 1, 1942, on Oahu, Hawaii, flying the F4F Wildcat before transitioning to the F4U-1 Corsair. The squadron completed two combat tours under the previous call-sign “Swashbucklers” before reforming as the “Black Sheep” under the leadership of US Marine Corps Major Gregory “Pappy” Boyington in August 1943.

The Marines of VMF-214 selected the new squadron namesake to highlight the pilots’ varied experience levels. From seasoned veterans with multiple combat tours under their wings to pilots fresh from flight school, the Black Sheep built their legacy from years of arduous fighting in World War II. As a result of their accomplishments, VMF-214 became the first Marine fighter squadron awarded the Presidential Unit Citation for extraordinary heroism in action.

On Jul. 9, 1957, the squadron was re-designated VMA-214 as the Black Sheep transitioned to flying fixed-wing attack aircraft. In Vietnam, the Marines of VMA-214 distinguished themselves as an attack squadron, flying the trustworthy A-4 Skyhawk from expeditionary airfields in Chu Lai. The Black Sheep continued to fly the A-4 until 1989, when they transitioned to the AV-8B Harrier. Over the next 30 years, the Black Sheep participated in combat operations throughout the globe, including Operation Restore Hope, Operation Iraqi Freedom, and Operation Enduring Freedom. Most recently, VMA-214 completed its final AV-8B deployment with the 11th Marine Expeditionary Unit, during which they participated in Operation Inherent Resolve.

“The re-designation of VMA-214 to VMFA-214 is the end of a legacy for the Black Sheep and Marine Aircraft Group-13,” said US Marine Corps Lt. Col. Keith Bucklew, the outgoing commander of VMA-214. “This symbolic event finalizes the sundown for Harriers on the West Coast and closes the chapter on 58 years of attack aircraft operations for the Black Sheep.”