Log In Sign Up
Homepage Military AviationVideo: Top Gun Maverick Trailer recreated in DCS World Simulator is Cooler than the Official One

Particularly we prefer the DCS Top Gun Maverick trailer ending with the long take on the F-14 over the simple flyby the 14 does in the main trailer.

As the video in this post shows, YouTuber Forest Rat recreated Top Gun: Maverick trailer using Digital Combat Simulator (DCS) and we think is cooler than the official one.

Particularly we prefer the DCS ending with the long take on the F-14 over the simple flyby the 14 does in the main trailer.

The Tomcat shot in fact is way better – we like how the wings are sweeping as the Mighty Tomcat accelerates!

According to its website, DCS offers the most authentic and realistic simulation of military aircraft, tanks, ground vehicles and ships possible.

DCS World is fundamentally a deep, authentic and realistic simulation designed also to offer a more relaxed gameplay to suit the user and his particular level of experience and training. The ambition is to hand hold users from novice pilot all the way to the most advanced and sophisticated operator of such complex weapons systems as the A-10C Warthog or the F/A-18C Hornet. The only next step is the real thing!

Recently, DCS World came out with a flyable F-14A/B Tomcat, the same aircraft that appears in the original Top Gun movie. A flyable “MiG-28” preceded the Tomcat by three years.

Obviously, the first thing you’d do with a flyable F-14 is recreate Top Gun, and that’s exactly what Forest Rat did—remarkably well. As reported by Popular Mechanics, it helps that DCS World also models U.S. Navy aircraft carriers. (One minor quibble: the carrier in the movie is the recently decommissioned, one-of-a-kind USS Enterprise, while the carrier in the game is a Nimitz-class carrier).

The aircraft models in DCS World look very good in the YouTube video, but they’re still clearly artificial. That being said, they hold up pretty well against real live aircraft used in Top Gun. 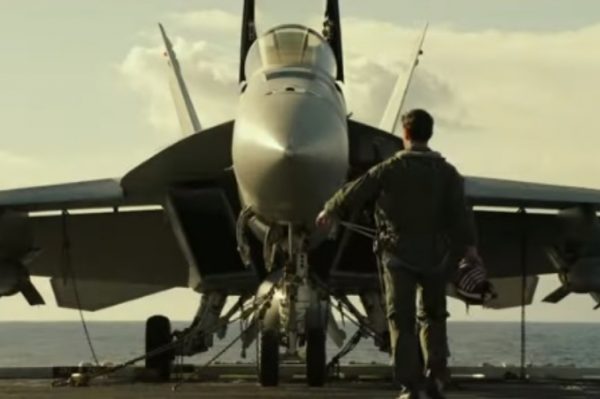