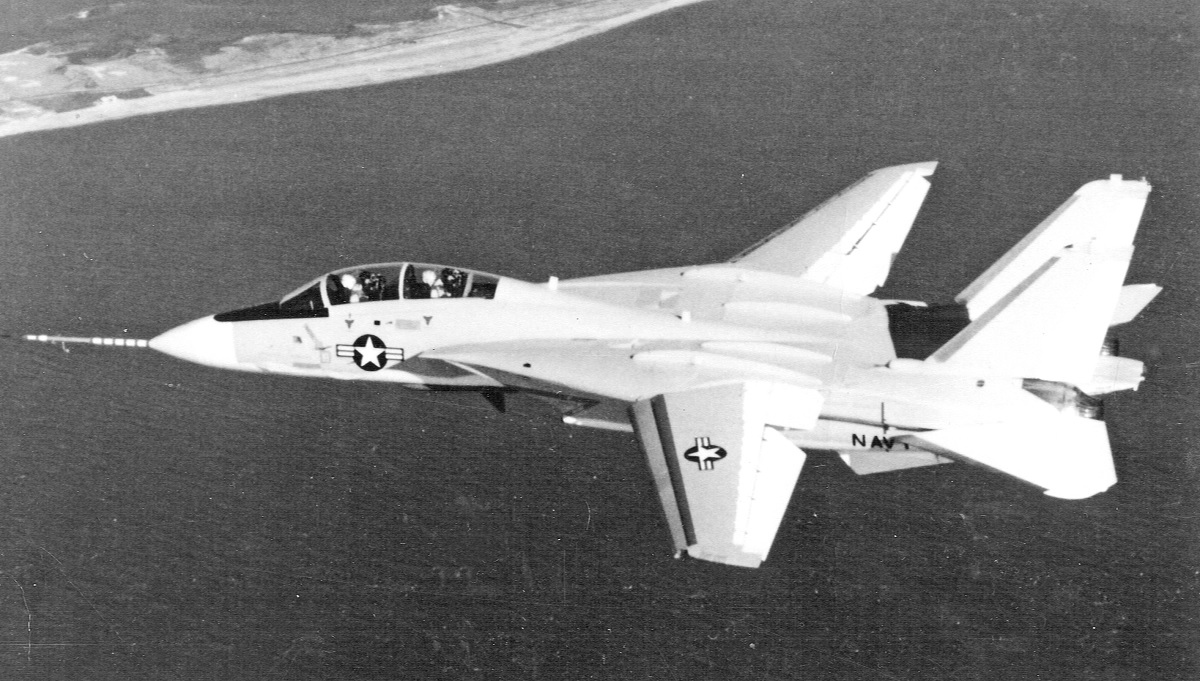 On Dec. 21, 1970 sunset was less than half an hour away, so Smythe cut the afterburner just after take-off, flew two low-speed circuits of the field at 3,000 ft, then F-14A Tomcat BuNo 157980 came in to land. The triumphant `Grummanites’ turned their thoughts to Christmas, content to leave the start of detailed testing until after the holiday.

Once safely delivered to Grumman’s flight test centre at Calverton, the first Full Scale Development (FSD) Grumman F-14A Tomcat (BuNo 157980) was finally assembled, then put through ground vibration tests, a fuel function check, and calibration. Taxi trials started on Dec. 14, 1970, and by the 21st Tomcat was ready to fly. Despite poor weather, Grumman chief test pilot Robert Smythe and project test pilot William ‘Bob’ Miller decided to attempt a short flight. With its wings fixed in the forward position, and carrying four dummy Sparrow missiles, the aircraft set off down the Calverton runway just after four o’clock in the afternoon, taking to the air more than a month ahead of the contracted date. As told by Doug Richardson in his book Grumman F-14 Tomcat, sunset was less than half an hour away, so Smythe cut the afterburner just after take-off, flew two low-speed circuits of the field at 3,000 ft (900 m), then came in to land. The triumphant `Grummanites’ turned their thoughts to Christmas, content to leave the start of detailed testing until after the holiday.

Eight days later on Dec. 30, Tomcat lifted off the Calverton runway at 10.18. Smythe, who had been in the front cockpit on Dec. 21, now rode in the rear seat, while Miller sat in front. Accompanied by chase planes, it turned towards the southeast to reach its assigned flight-test area. Stability and control checks went smoothly, the landing gear was retracted, and Miller started to build up the speed from just over 13o knots (245 km/h) to 18o knots (33o km/h). At around 10.43 one of the chase planes noted what appeared to be a trail of smoke leaving the Tomcat.

As the chase plane closed in to take a closer look, Miller reported a primary hydraulic system failure. Aborting the sortie, he turned for home. Although the route back to Calverton took the Tomcat past a small airfield, this had no crash equipment or arrester gear, and the wind was blowing across the runway. Several years later, Smythe was to tell Arthur Reed, air correspondent of The Times, ‘I remember thinking, I hope we won’t regret passing an airfield.’

When four miles (6 km) from Calverton Field, the crew used the emergency nitrogen bottle to blow down the gear. Just after the crew confirmed that it was down and locked, the unthinkable happened—the secondary hydraulic system also failed. Relying on the Combat Survival System, a last-ditch control system driven by an electrical pump and used to operate the rudders and tailerons only, Miller tried to continue the approach and land the aircraft. On the final approach, even this limited control system showed signs of failing. The Tomcat began a gentle longitudinal oscillation which persuaded its crew that their luck had finally run out.

Smythe ejected with the aircraft a bare 25 ft (8 m) above the trees, and the aircraft immediately pitched over into a dive. Miller ejected less than half a second before impact, but like Smythe suffered only superficial injury. Within half an hour, both men were back in the control tower, where their wives and families—VIP guests for the day—had been helpless witnesses of the crash. Since their injuries were confined to a skinned fingertip and a cricked back, both men were able to continue as Tomcat test pilots, but Miller died 18 months later in another Tomcat crash.

An official investigation soon showed that fatigue failures of the pipes in both hydraulic systems had led to a partial failure of the flying controls. In theory, the chances of such a double failure were remote. During the Vietnam war such double failures were not uncommon, but were the result of combat damage. In aircraft such as the F-105, primary and secondary hydraulics were often so close together that the combat damage which knocked one out also wrecked the other. In aircraft such as the Tomcat, the two hydraulic systems were widely separated, a wise move but one which contained the seeds of the prototype’s destruction.

The hydraulic system of the Tomcat had to cope with the task of swinging the wings, and was by far the most powerful that Grumman had designed (with the exception of the system devised for the supersonic transport, or SST). Michael Pelehach’s team were faced with a very high weight of hydraulics, so opted to use technology developed when Grumman tackled the daunting task of designing NASA’s Apollo LEM manned lunar lander. Lightweight titanium hydraulic lines were used, but connected in a novel manner. Conventional hydraulic lines are connected using screw-threaded valves, components which are bulky and prone to leakage. For Tomcat the pipes to be mated were joined using a bimetal sleeve which had been chilled in liquid helium before installation. As the sleeves returned to normal temperature, it shrunk, gripping the lines in a leakproof junction. What was not appreciated was that the new titanium pipework was sensitive to how it was mounted within the aircraft, both in terms of how it is fixed to the fuselage structure and in terms of the distance between fixings.

`What happened was that we had a nine-cylinder hydraulic pump which worked off the engine’, recalls Pelehach. ‘When we ran the engine and ran the pump—no problems at all. When they flew the airplane … they were checking single-engine performance. Now you don’t shut the engine off, you simply idle the engine.’ Here lay the million-to-one chance which was to down the prototype. ‘When he (Miller) pulled the engine to idle RPM in flight, that precise RPM of the engine and the nine-cylinder pump happened to be on the frequency that made the lines break.’ Faced with vibrations at the exact frequency at which the lines would naturally resonate, the pipework had vibrated, developed metal fatigue and broke.

`When we finally found out what had happened, we put an airplane on a test stand and put the engine to flight idle and watched the pipe—and in nine seconds the pipe broke!’ In the case of Tomcat No 1, the second hydraulic system should have allowed the aircraft to continue flying and land safely back at Calverton, but this too had failed. ‘We’d put the two systems in the airplane as mirror images, so what broke one side also broke the other.’ Primary and secondary hydraulic lines in aircraft built since then take advantage of a rule devised in the light of the Dec. 30 crash—’Hydraulic lines in airplanes must be mounted differently —don’t make them mirror images.’

The original prototype had been intended for envelope-expansion flights and high-speed testing, so it carried different instrumentation to those immediately due to follow it. The 12th airframe was re-numbered 1X and assigned to these tasks, while work moved ahead on completing the No 2 Tomcat so that flight testing could resume. The US Navy ordered the removal of the titanium hydraulic lines, but the shrink-sleeve fitting method was retained. 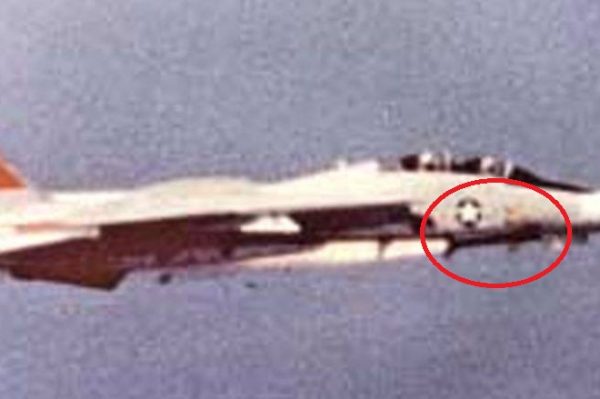 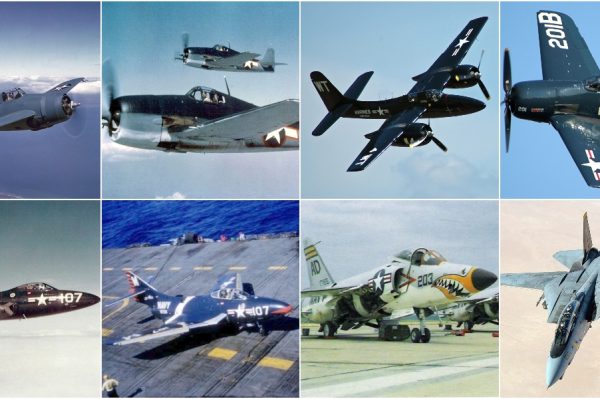