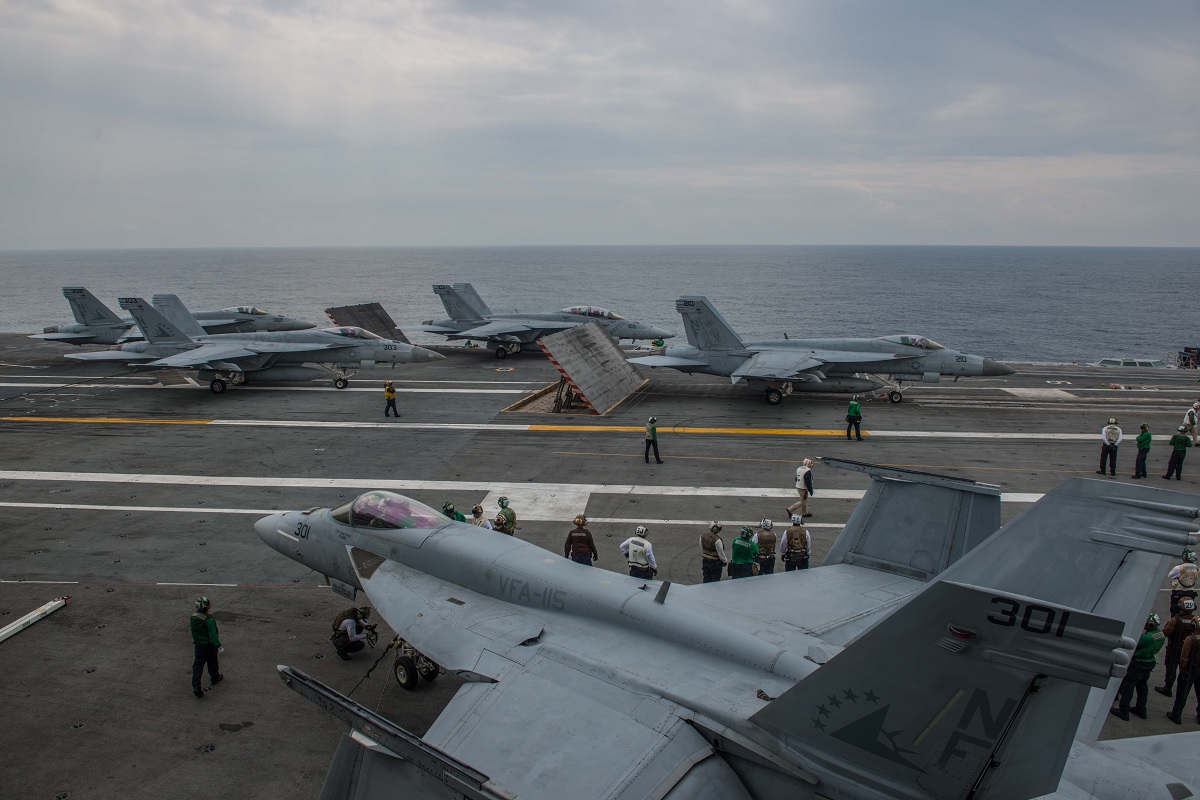 “The interaction between the U.S. F/A-18s and Russian Tu-95s were safe and professional and it took place more than 80 miles from the carrier,” Lt. Cmdr. Nicole Schwegman

According to Fox News, Russian nuclear bombers approaching the aircraft carrier USS Ronald Reagan (CVN 76) off the coast of North Korea have been intercepted at more than 80 miles from the ship by U.S. Navy F/A-18s on Oct. 29, 2017.

The news has been confirmed by U.S. Navy Officials who told Military.com that multiple F/A-18s in fact were scrambled on Sunday to escort two Russian Tu-95 bombers away from the ship currently stationed near North Korea and operating in the Sea of Japan.

Lt. Cmdr. Nicole Schwegman described the incident with the Russian Air and Space Force (RuASF) as “safe and professional.”

On Oct. 30, 2017, the Russian Ministry of Defense confirmed to TASS news agency that U.S. and Japanese aircraft escorted their “missile-carrying Tupolev-95MS strategic bombers during their flights over international waters of the Sea of Japan and the Pacific Ocean.”

“Two strategic bombers Tupolev-95MS of Russia’s Aerospace Force have carried out routine flights over international waters of the Sea of Japan and the western part of the Pacific Ocean,” Russian officials said. “At certain sections of the route the Tupolev-95MS crews were accompanied by a pair of F-18 fighters (of the U.S. Navy), and a pair of F-15, F-4 and F-2A fighters (of the Japanese Air Force).”

Both Russia and the U.S. have sent their nuclear bomber near North Korea amid increasing tension between the rogue North Korean regime and the U.S. and its allies in the region.

Last weekend, a U.S. Air Force (USAF) B-2 stealth strategic bomber, flew over undisclosed parts of the Pacific region ahead of President Trump’s visit to Japan and South Korea.

The B-2 mission was aimed to “familiarize aircrew with air bases and operations in different geographic combatant commands, enabling them to maintain a high state of readiness and proficiency” according to a U.S. military statement.

However, U.S. and Russian aircraft have frequently interacted at close quarters without incident in recent months, even as political tensions persist between the two nations.

As we have explained, when U.S. Navy F/A-18 pilots described the Syrian Su-22 Fitter shoot-down that took place on Jun. 18, 2017 over Syria in a September panel, they noted that that day, and on multiple other occasions, they had followed or escorted Russian aircraft operating safely and professionally in the region.

However, there have been exceptions.

According to U.S. officials the Flanker approached the RC-135U recon jet “rapidly,” and came within five feet of the American aircraft.