The US Marine Corps (USMC) pilot who safely landed a KC-130J Super Hercules tanker in a California field after a mid-air collision with an F-35B in 2020 received the highest military aviation award on May 25, 2020 in San Diego, the service said in a news release.

During a ceremony at Marine Corps Air Station Miramar, the USMC said that Marine Capt. Michael Wolff, a KC-130J pilot, was awarded the Distinguished Flying Cross for landing “successfully after losing two engines in flight.”

Wolff landed the four-engine plane in a farmer’s field with the help of six crewmembers and a co-pilot, The San Diego Union Tribune reports.

On Sep. 29, 2020 Wolff lost those two engines due to a mid-air collision with a Marine Corps F-35B Lightning II jet while conducting refueling operations. The pilot of the F-35 safely ejected before the jet crashed in the Imperial County desert. The four-engine KC-130, its two right-side engines heavily damaged in the collision, made an emergency landing in a field near the Salton Sea.

Audio recordings also reveal the conversation between the KC-130J pilot and air traffic control as the pilot made the emergency landing after the collision. As the pictures in this post shows, the mid-air collision caused extensive damage to the KC-130J’s engines on the right-wing and the remnants of a refueling pod.

According to USNI News, the audio, which emerged online, included Wolff informing air traffic control that the tanker lost two engines after colliding with another aircraft, which was the F-35B.

“LA Center, LA Center — Raider 50 — declare an emergency. Mid-air collision with VOLT-93. We have two engines out. We’re leaking fuel and might be on fire and an emergency descent at this time. Raider 50,” Wolff says in the recording.

A separate conversation between air traffic control and an American Airlines pilot who saw flames from the incident was included in another recording.

“We’re going to report that there was some sort of flares — some sort of pyrotechnic device — at our two o’clock position, less than ten nautical miles, maybe five miles away, at an altitude of probably 25,000 feet,” the pilot says.

The American Airlines pilot said he could also see a “plume” of smoke on the ground, presumably from where the F-35B crashed.

“I’m thankful how everything turned out. I’m happy to be alive,” Wolff said in a statement. “I still love flying, and I was happy to get up in the air as soon as I could afterwards. Everyone did their part and came together.” 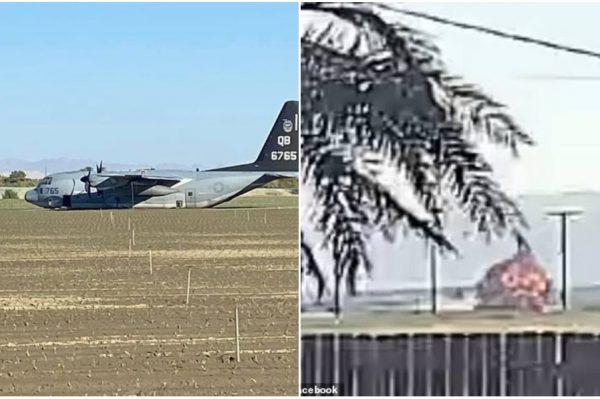