By the early to mid-1980s, TOPGUN had developed a long-standing relationship with the USAF Fighter Weapons School.

The history of air combat has seen one recurring theme—new tactics are learned in battle, forgotten or discarded when battle concludes, and relearned at great cost during the next war. This cycle continued into the 1960s, when America was drawn into the Vietnam War. Despite having a skill and equipment advantage, US Navy aircrews were faring poorly against North Vietnamese fighters. Air combat lessons learned during prior wars, and since forgotten or deemed inapplicable due to advances in technology, were once again relevant.

TOPGUN, the Navy’s Fighter Weapons School, was established in 1968 to teach Navy aircrews the core air combat tactics, to train others in those tactics, and to ensure that naval aviation “never again” forgot its lessons learned.

As explained by Brad Elward in his book TOPGUN: The Legacy: The Complete History of TOPGUN and Its Impact on Tactical Aviation, by the early to mid-1980s, TOPGUN had developed a long-standing relationship with the USAF Fighter Weapons School. Air Force FWS instructors came through the TOPGUN class in the mid-1970s, and several informal exchanges took place over the years. The relationship took another step forward in 1984 with the arrival of Mike “Boa” Straight, an F-15C instructor from the USAF FWS, who became an instructor on the TOPGUN staff. Straight was followed by a string of F-15C pilots, who served on staff into the early 1990s. The USAF officers on staff were crucial in the introduction of division tactics, mixed section operations, gun employment, and helping the staff and students understand how a pilot could most effectively employ radar in a single-seat aircraft such as the Hornet.

Straight’s first lecture with TOPGUN was the MiG-23. “Both the Air Force and the Navy at that point in history were very interested in the MiG-23, and the MiG-25 a bit, but the MiG-23 was going to be the mass-produced aircraft that was the Russians’ first realistic capability that shoot at you head-on at some range with a radar missile. So everybody was studying its tactics.” Indeed, one source of learning Soviet tactics came from those stationed in West Berlin, which was at the time “buried in the middle of East Germany.” MiG-23s were practicing and training in different places within radar range of West Berlin, which made learning easy. According to Straight, at that time, TOPGUN was “just teaching these guys in one academic presentation what the Soviet tactics were, as opposed to maybe saying, ‘Well, the hell with their tactics; what are we going to do to them?’ And on the Air Force side, the Air Force weapons school would present what the adversary may do, but place the emphasis on ‘What are you going to do to kick his ass?” The Navy “didn’t really have a presentation or academic discussion at TOPGUN of how to employ the Navy’s and Marine Corps’ all-aspect weapons against the Flogger,” Straight said. “It was all about what the Flogger was going to do to you: Straight said to set the foundation for how he wanted to change the lecture, he took one of the TOPGUN instructors, Mike “Vida” Blue, to Nellis and sat down with a group of F-15C instructors for the afternoon. “It let ‘Vida see what I was aiming at as a different philosophy of what to teach and how to talk about forward-aspect missile employment. And so, based on that, the school let me rewrite the Flogger tactics lecture to add to it, ‘What are our forward-aspect tactics against something like the Flogger that can shoot at you head on?’”

Straight thought the exchange experience was fantastic for both services. Both services learned from one another and were able to incorporate those lessons and observations into their own syllabi. “It gave us cultural awareness too,” Straight said. Left alone, the services tended to develop a “we the best” attitude. This went a long way toward breaking that down, said Straight. Tom McCarthy, who was the third USAF exchange officer, agreed with Straight and added that he felt his efforts to impart four-ship (division) tactics had made a significant impact. “I think with the four-ship tactics and the way you teach each other within the same four-ship was something that I contributed, but this was also something that I contributed as a follow-on to both ‘Boa’ and `Gozer’ [Leister]. I just carried on with that thought process on how we can all get better at air-to-air and with the bigger packages.” The USAF exchange instructors also helped the TOPGUN staff better understand how to utilize the Hornet’s radar. Most of the Navy fighter community had come from the two-seat Phantoms and Tomcats, and most pilots had little or no radar experience since the RIOs operated the long-range radars. Moreover, many early Hornet pilots had transitioned from the Phantom or the A-7, again with little air-to-air radar experience.

One further event occurred in the 1980s to enhance the relationship between the two weapons schools. At some point during Straight’s tenure on staff, the two fighter weapons schools began holding biannual get-togethers to exchange ideas. The exchange alternated between Nellis AFB and Miramar and involved each providing a series of short lectures followed by flights where tactical differences could be observed and later discussed. Tom McCarthy, one of the F-15C exchange instructors, fondly recalled the exchanges during his tenure. “TOPGUN would deploy out to Nellis, and we would fly against the Air Force F-15 and F-16 Weapons School. We’d fly big missions together. We’d go through each other’s academics. We’d brief and exchange ideas and fly against each other, and it just made the whole relationship a little bit more formal.” The exchanges, which lasted as long as a week, also involved social opportunities: usually a cookout, sporting event, and often a paintball game between the respective staffs. The exchanges went a long way toward developing professional respect and rapport between the services. 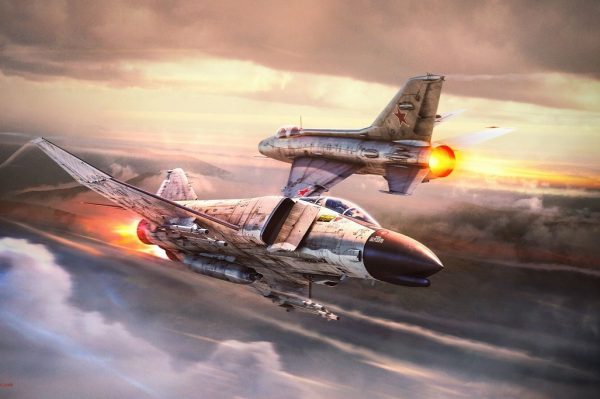 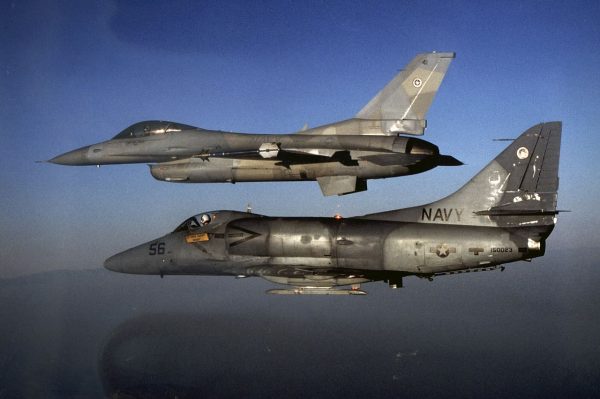 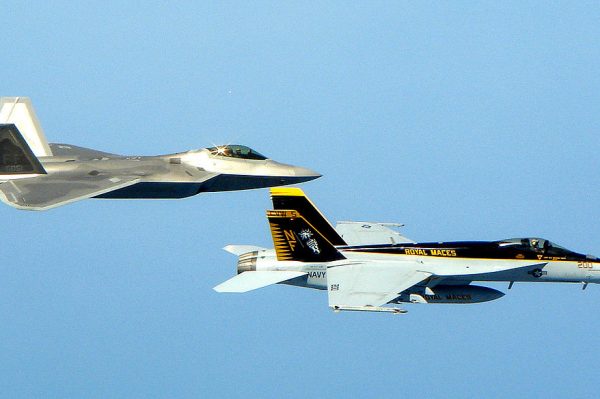