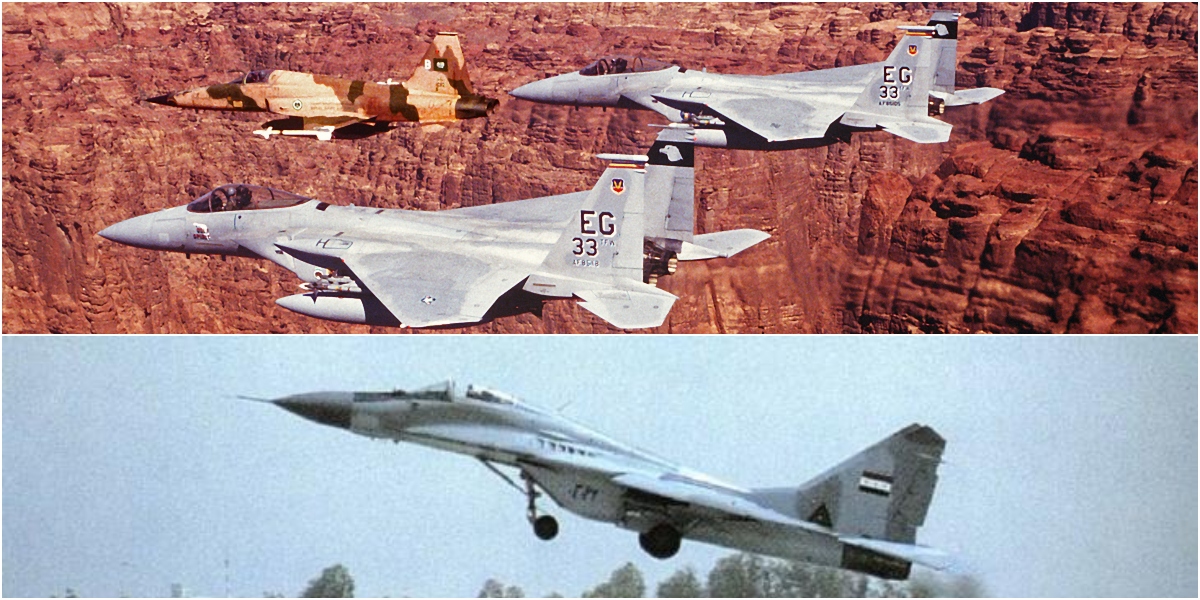 ‘At about two miles I looked once again, but I was no longer thinking about taking a pre-merge shot, so I planned to merge with the bogey at 50 ft off of his left wing. As I crossed his wing-line, I saw that he was a brown- and green-camouflaged Iraqi MiG-29!,’ Capt Cesar ‘Rico’ Rodriguez, USAF F-15C Eagle pilot.

The third day of Operation Desert Storm (Jan. 19, 1991) saw one of the most exciting engagements of the entire war fought out over the skies of Iraq. F-15C Eagle pilots Capt Cesar ‘Rico’ Rodriguez and his wingman Capt Craig ‘Mole’ Underhill of the 58th TFS/33rd TFW were conducting a fighter sweep ahead of a strike force of F-16s and F-4Gs when they were vectored by an AWACS controller towards a single pop-up threat.

Within minutes Rodriguez had been locked up on radar by the approaching Iraqi Air Force (IrAF) MiG-29, forcing him to turn away from the enemy jet in order to spoil its targeting solution. Underhill supported his flight lead by firing an AIM-7 Sparrow, which guided squarely into the Iraqi jet. Rodriguez reckons that it was probably a combination of his ECM, chaff, and the efforts of other airborne platforms that denied the ‘Fulcrum’ pilot the ability to launch a missile at him.

Turning back towards the burning MiG after the AWACS controller had spotted a second pop-up threat, Rodriguez detected this second contact of the mission as he recalls in Steve Davies’ book F-15C Eagle Units in Combat:

‘We then received another call from the AWACS. “Second group, north, ten miles”, at which point we executed an in-place check turn to the north. “Mole” and I were about 2.5-miles apart, and I was visual with him off my right wing, and slightly ahead. I looked up and saw a smoke trail — not a missile trail, but engine smoke — so I put my Auto Acq out there and “Mole” and I simultaneously locked him up.’

Underhill later wrote that the MiG initiated a hard turn into him when his Auto Acq mode triggered its RWR. Rodriguez continued:

`We started going through our ID matrix, and the target displayed a friendly electronic return to both of us. I directed a break lock and re-lock, but the same thing happened again. I now directed a VID pass, and pushed “Mole” out to a five mile line-abreast formation. The bogey was closest in azimuth to my nose, so I flew the pass. I brought the Target Detection box [a square symbol in the HUD that is overlaid onto the radar-designated target’s position] into view and looked at the contact at about eight miles, but it was just a dot and I couldn’t tell what it was.

`I looked again at about four miles and saw a western-looking silhouette that resembled an F-15 or an F/A-18, so I don’t declare him hostile. At about two miles I looked once again, but I was no longer thinking about taking a pre-merge shot, so I planned to merge with the bogey at 50 ft off of his left wing. As I crossed his wing-line, I saw that he was a brown- and green-camouflaged Iraqi MiG-29!’

The MiG was flying in the region of 8000 ft, and Rodriguez had flown a low-to-hi VID engagement into the sun, constantly staying below his adversary’s plane of motion.

`I declared, “Hostile, MiG-29”, and began a hard left turn when he started his left turn, so that we had what looked like a classic two-circle flight. Initially, his turn was level, so rather than stay horizontal with him I transitioned into a split-S manoeuvre to cut across his circle [turn]. “Mole” was now in the high 20,000 ft regime in a covering position, looking for an option to enter into the fight.’

The engagement quickly turned into a single-circle fight, where both aircraft attempted to out-turn each other in what looked like a constant spiral, but ‘Rico’ held the advantage because he had managed to get behind the bandit’s ‘3-9 line’ [the imaginary line that stretches from the left wing to the right wing] in the first couple of turns.

`He recognised that I was there, and I think that he may have even visually seen “Mole” up there. The fight now turned into a left-hand descending spiral, with me having an energy advantage that I converted into a WEZ (close to within firing parameters). I spent time inside his turning circle with a high heading-crossing angle, then I flushed to the outside of his turning circle, before regaining energy, aligning circles and coming back inside his circle, looking to use an AIM-9 against him. As I cut back inside for the shot, there was an opportunity for “Mole” to come in and take a shot too, but I opted to call him off and continue my pursuit. We were now below 1000 ft.

`He tried to fly a split-s manoeuvre in what looked to me like a “cobra” [a high angle-of-attack pitch-up or pitch-down]. I came out of the fight and dipped my wings to pick up the Tally-Ho [visual contact], at which point he impacted the ground. He hit the desert floor and then tumbled with all the momentum he had for what seemed like several miles. Meanwhile, “Mole.’ and I were getting the “hell out of Dodge”. “Mole” called, “Snap south. I’m tactical right side”, and I looked left and there he was, directing our separation.’

Rodriguez was content in the knowledge that not only had he just flown the only real turning fight of the entire war, but that he’d foiled the IrAF’s best attempts to down a coalition fighter at the same time. He believes that the MiGs originated from a covert highway airstrip known as F1 which served as an alert strip out in the desert. 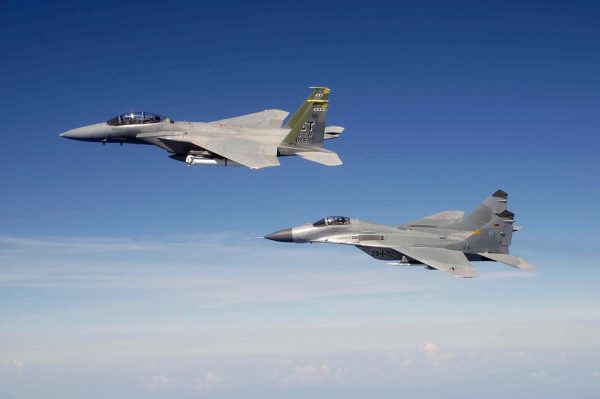 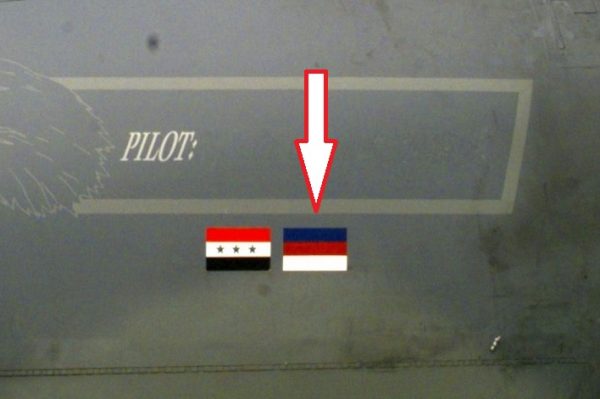 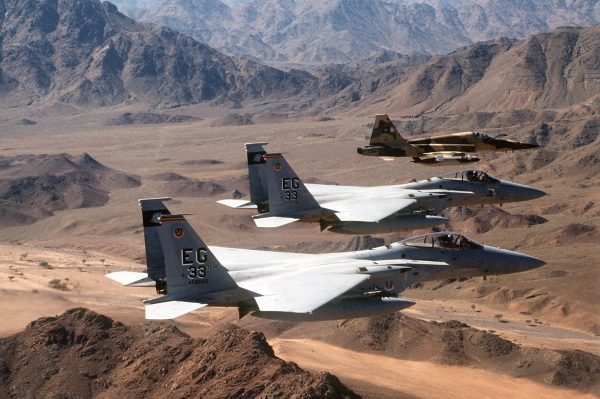