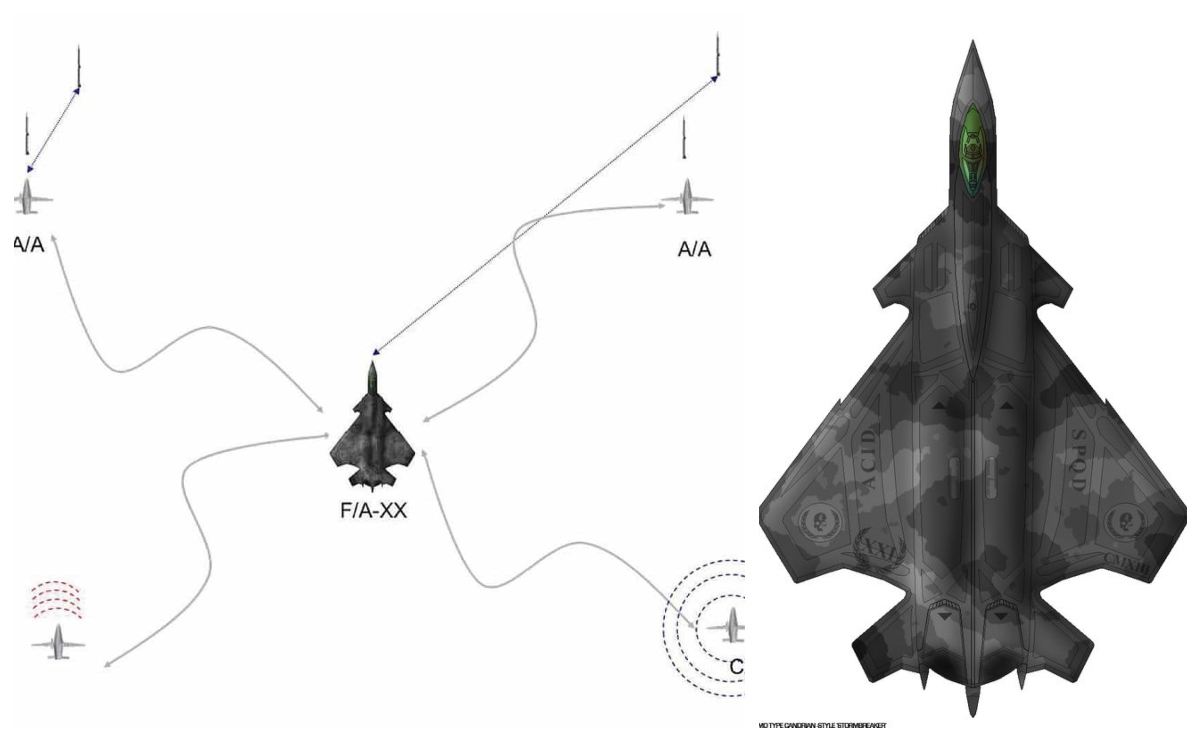 The US Navy’s Naval Air Systems Command (NAVAIR) released the first image of what the future F/A-XX carrier-based fighter aircraft could look like.

The US Navy’s Naval Air Systems Command (NAVAIR) released the first image of what the future F/A-XX carrier-based fighter aircraft could look like in a document called “Navy Aviation Vision 2030-2035.”

“The CVW of the 2030s achieves a complementary mix of F-35C Lightning II, F/A-18E/F Block III Super Hornet, and next generation strike fighter (F/A-XX), with the F/A-18E/F Block III providing the backbone of the CVW through 2035,” the document says. “F/A-18E/F Block III with reduced signature, Infrared Search and Track (IRST) Block II, and increased computing, working in tandem with the capabilities provided by the F-35C and E-2D, will make the entire CSG more lethal and survivable.”

According to Aviation Week’s editor Steve Trimble on Twitter, the image features “a pseudo lambda/delta wing, and, I think, YF-23-style ruddervators (but they might be stabilizers).”

The description featured in the NAVAIR document also calls for more speed and range than F/A-18E/F Block III.

“The F/A-XX is the strike fighter component within the Next Generation Air Dominance (NGAD) Family of Systems (FoS). It is planned to replace the F/A-18E/F Super Hornet in the 2030s. Its specific capabilities and technologies are under development, however analysis shows it must have longer range and greater speed, incorporate passive and active sensor technology, and possess the capability to employ the longer-range weapons programmed for the future. As the Super Hornets are retired from service, a combination of F-35C and F/A-XX will provide Navy tactical fighter aircraft capability and capacity within the CVW. The advanced carrierbased power projection capabilities resident in F/AXX will maintain CVN relevance in advanced threat environments. […] The appropriate mix of F/A-XX, manned and unmanned platforms will be evaluated to ensure the most lethal and affordable CVW possible.”

In fact, the illustration of the F/A-XX shown in the “Navy Aviation Vision 2030-2035” document, features the future US Navy fighter with the three types of “remote carriers” to illustrate the “Manned-Unmanned-Teaming” or MUM-T concept.

As we have already reported, the service in 2016 began forecasting plans to seek a family-of-systems approach, now known as Next Generation Air Dominance (NGAD, a program that although has the same name is distinct from the US Air Force’s own NGAD program). However, the family of systems approach could see the Navy going down a path similar to the US Air Force’s NGAD pursuits, in which the Navy buys a manned fighter and uses different unmanned systems to supplement the mission.

But as noted by Naval News, it turned out the image of the future F/A-XX fighter released by NAVAIR was actually created back in 2007 for a role-playing game.

According to a Tweet in response to that of Steve Trimble, “The person who created that artwork has come forward on Reddit; turns out the Navy decided to plagiarise someone’s fictional “TSF-624 Shukusei” air superiority fighter created back in the 2007 for the role-playing game Nation States.”