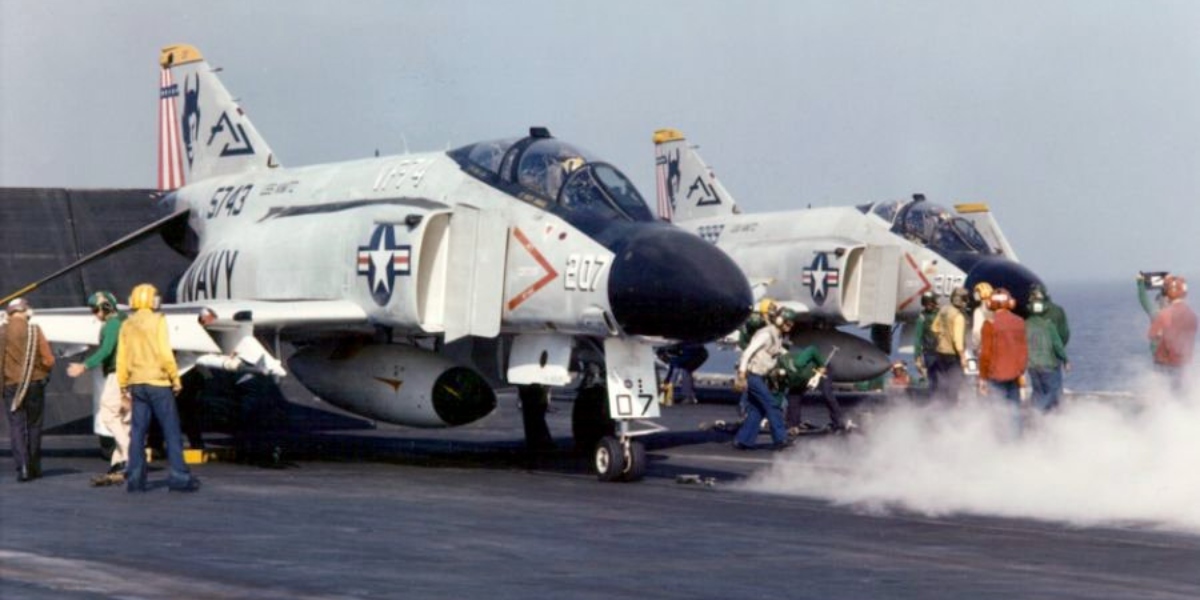 “Greyhound” Simons was a decorated Air Force exchange pilot who had lots of combat time over Viet Nam. He remembered stories of F-4 pilots calling “Fox 1” or “Fox 2” and failing to pull the trigger because they hadn’t been pulling the trigger during training. His habit was to always pull the trigger when he called a shot.

On Aug. 17, 1978 while flying over the Mediterranean 80 nm south of Marseille, France, a US Navy F-4 Phantom II from VF-74 attached to CVW-17 aboard USS Forrestal (CV-59) crewed by Sammy Bonnano and Dave “Fly” Svajda (checking the spelling, it’s Svajda) as Radar Intercept Officer (RIO) was mistakenly shot down by an AIM-9H Sidewinder missile fired by another VF-74 F-4 flown by Jim Simons (Greyhound, a USAF pilot on an exchange tour) with Scot Callaway (Bugs) as RIO.

“We were flying a typical FORCAP mission seventy-five mile north of the Forrestal, an hour of boring intercepts then back to marshal (holding pattern before landing). The best part of the flight was that it was a day launch to a sun-set recovery, and a full moon to boot.

“We were the target for the last intercept. At the end of this intercept we planned to join the section together and return to the ship.

“Most RIO’s would use the Pulse Doppler (PD) radar mode to search for and acquire a long range target. PD was great for long range and “look down” target acquisition and fire control system tracking. PD senses targets closing velocity and, in these early versions of PD radar, would usually lose the target once there was little or no closure. This would happen when the intercepting aircraft was pointed at the target and had about 90 degrees of turn to go to match the targets heading. Because of this limitation most RIO’s would use PD at range and then switch from PD to pulse at about 10nm so the radar wouldn’t break lock during the final phase of the intercept.

“We decided to “dick around” with Greyhound and Bugs. Right after Greyhound called Fox 1 we turned about 40 degrees into the fighter so instead of him having to turn to the right to roll in behind us, he would have to turn left. To add a little more confusion we descended to 10000 feet, slowed down to 230 KIAS. Lowered the landing gear and flaps, and I started dropping chaff. As expected Bugs’ radar broke lock and on the pulse display he could see about ten targets, us and the chaff, so he called lost contact at about eight miles. The GCI controller called us at 040 for six miles as Greyhound picked us up visually. I saw him at 10:30 high about 4 miles as he started a barrel roll over us for his visual Sidewinder attack from our five o’clock.

“Now it gets a little into weeds on the AWG-10 system. Their airplane was loaded 0 and 2 – no AIM 7’s and two AIM-9H’s. The AWG-10 was designed when the AIM-7D was the operational model of the Sparrow missile and it’s default weapons firing information was for the AIM-7D. To give proper firing solution information for aircrew training the ordies had loaded a “shorting wafer” onto an AIM-7 belly station so the AWG-10 would give a proper firing solution for an AIM-7F, the model we normally carried. There was only one problem with this – the Master Arm switch had to be armed for the system to see the shorting wafer.

“Greyhound Simons was a decorated Air Force exchange pilot who had lots of combat time over Viet Nam. He remembered stories of F-4 pilots calling “Fox 1” or “Fox 2” and failing to pull the trigger because they hadn’t been pulling the trigger during training. His habit was to always pull the trigger when he called a shot.

“So now we have all the ducks in a row for a major malfunction: armed weapon system, distracted pilot flying a visual attack, good tone, trigger squeeze.

“When the Sidewinder came off the rail Greyhound called “Break starboard, break starboard” followed quickly by “Eject, Eject.” Over the ICS I hear Sammy ask “Fly, is that for us?” There’s a tremendous explosion as the missile hits our starboard exhaust and things went into slow motion. Sammy said” Fly punch us out.” I was way ahead of him. I always flew in “Command Eject” but I double checked the handle to ensure it was there. I reached for the lower handle and pulled. I was looking straight ahead and saw flames and smoke in right side “Mig Mirror” as the canopy came off. I went through about half a tumble before the chute opened. I saw another parachute about a quarter of a mile away and a little lower than me. At first I thought we had had a mid air, then I saw our airplane crashing into the water and I looked back and saw the missile smoke trail and quickly figured it out.

“It was a warm, beautiful summer evening in the Mediterranean. I watched the sun set and the full moon rise in a cloudless sky. Training kicked in and I remembered “IRSOK”. Inflate the life preserver, Release the life raft, Snap the life preserver lobes together, release the Koch fittings. It’s funny the things you think about in a strange situation. After I released the life raft, I looked at the release handle and decided to keep it as a souvenir. I stuffed it behind the life jacket. It’s still sitting in my “I love me” display next to the “pigtail” from the Sidewinder from Greyhounds plane.

“I saw my raft hit the water and reached for the Koch fittings to release the chute. I got one off as my feet hit the water and was drug about twenty feet as I undid the other fitting. In survival training it was difficult getting into the raft. There was no problem when you’re really scared. I saw an S-3 circling low so I got out my PRC-90 radio and checked in. Tony “Eagle” Reade was the S-3 pilot and he told me Sammy was okay and in his raft. He also told us that a SAR helo was about thirty minutes out. Then the S-3 came in real low and put a string of flares within thirty feet of my raft. After we were safely back on board I asked Eagle how he had got them so close. He smiled real big and said “I was aiming at you. Didn’t figure I was good enough to hit you.”

“It was getting dark so I tried to get my flashing beacon light out but I couldn’t get the zipper on my survival vest undone. Luckily I had taken all the pencil flares from the survival vest of one of my roommates who had come to the end of his flying days and was getting out of the Navy. When I saw the Helo I started firing a barrage of flares. It worked because they flew toward me. A Rescue Swimmer jumped into the water and swam to my raft. He told me to get out of the raft. I did and I was horrified as he took a knife and sank the raft. My command at sea was over. They hoisted me out of the water. Sammy was already onboard. He had seen my flares from his raft and said it looked like a fourth of July show.

“We got back to the ship and were rushed to sick bay. Greyhound was waiting there for us. He was in tears and could barely talk. I felt really bad for him. His mistake would ruin his career and I had a great “sea story.”

“Sammy and I have stayed in touch through the years. We make sure we call each other each August 17’th. Of course he bitches at me that he could have saved the plane if only I hadn’t panicked and pulled the handle too soon and I counter that if he’d have “Broken Starboard” as directed I wouldn’t have had to follow the “Eject eject” command. And the best part is that Vickie and Wendy are still rolling their eyeballs at Sammy and me as we tell and re-tell this story for over forty years.” 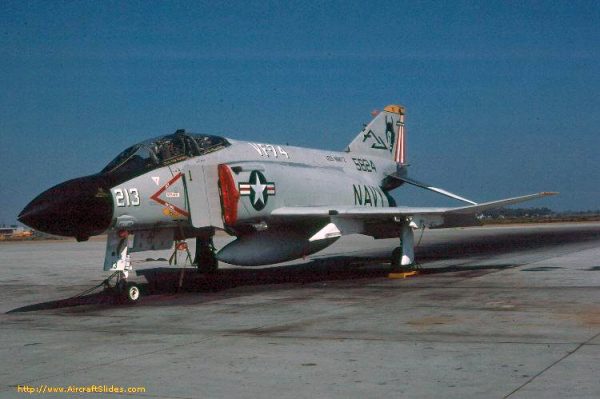 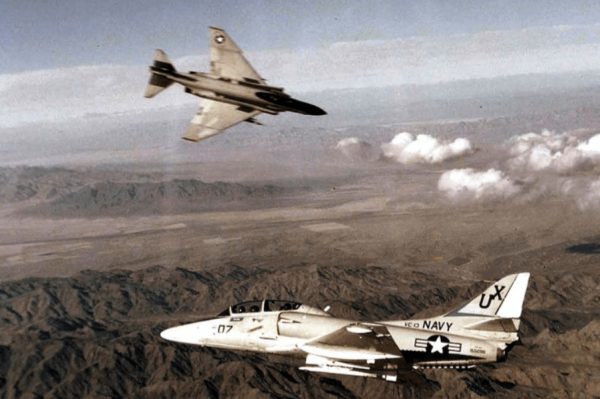