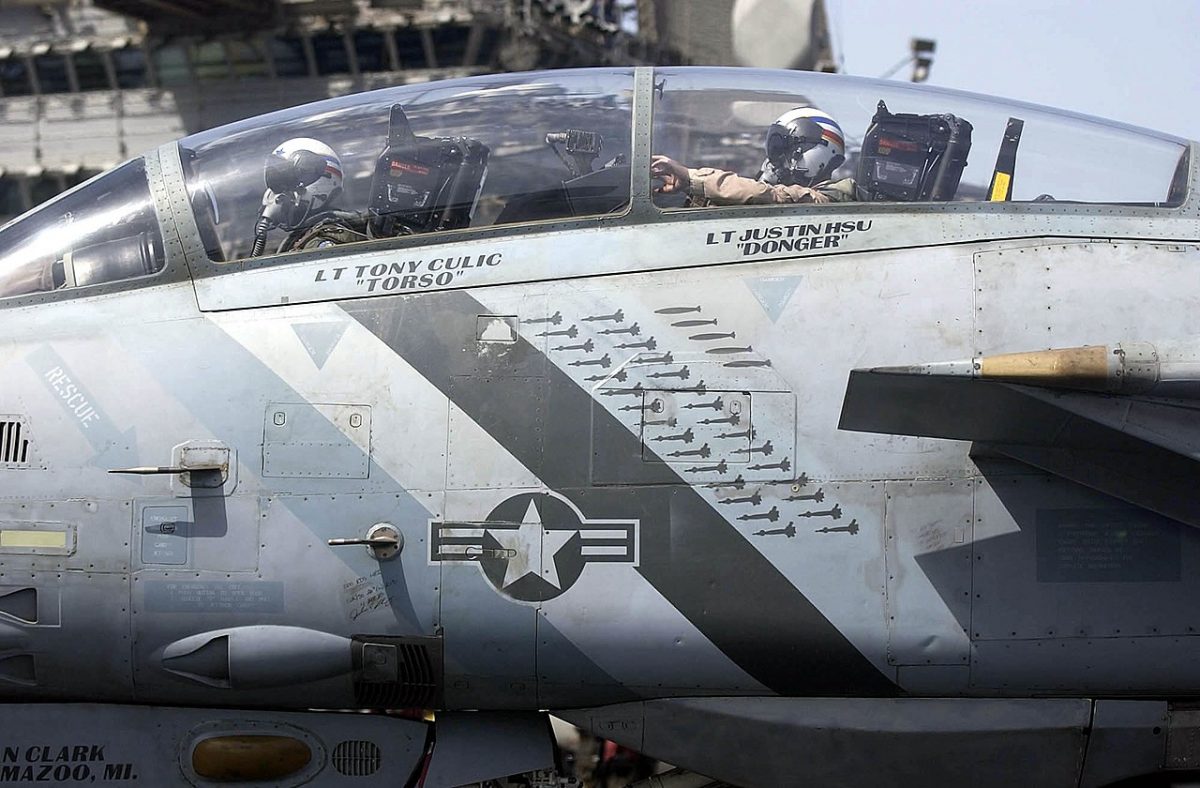 Although only the F-14 pilot has flight controls in the front seat, there are a lot of things that are only in the Tomcat radar intercept officer (RIO) back seat.

The F-14 Tomcat was conceived as both an air superiority fighter and a long-range naval interceptor, which enabled it to both serve as escort attack aircraft when armed with Sparrow missiles and fleet air defense loitering interceptor role when armed with Phoenix missiles.

The F-14 was designed with a two-seat cockpit with a bubble canopy which affords all-around visibility aiding aircrew in air-to-air combat. The canopy is spacious, and fitted with four mirrors to effectively provide all-round visibility.

Although only the pilot has flight controls in the front seat, there are a lot of things that are only in the radar intercept officer (RIO) back seat.

Given these premises, one may ask if the Tomcat was capable of flying with a civilian passenger in the RIO back seat, just like how two-seater F-15s and F-16s can in their WSO cockpit.

‘The back seat is not just another ejection seat, the person back there actually must do certain things for the aircraft to fly,’ Chuck Hunter, former F-14 Pilot, says on Quora. ‘Before we get to that everybody that flies in an ejection seat aircraft must have training on the ejection seat, the oxygen system, and other gear that they might be wearing. In most cases it is reality simple and a lot of “DON’T TOUCH THIS”. This goes for F-15s, F-16s, and F-14s.

‘There are no flight controls in the back seat of an F-14, but there are split duties. Before flying the RIO or the guest must run the OBC (On Board Check) which does a lot of things to prep the aircraft for flight and can only be run from the back seat. The back seat also has to turn on the IMU and eventually the inertial system and then the weapons system (though you can go without much of the weapons system). There is also a circuit break that needs to be pushed in running the Outboard Spoiler System. You cannot run it long on deck without it over heating, so it is done prior to launch.

‘If it is just a ride you can get airborne after that, though there are many other things the back seat needs to do to allow the pilot to fight the aircraft.

‘I took many non-RIOs in the back seat from the CO of the aircraft carrier to the flight surgeon and all had to learn at least that much, though we showed them more. I still remember trying to talk the flight surgeon into the location of a particular circuit break as we got onto the catapult because we were having an issue. Still took a minute or two but we did get airborne.

‘Yes, there are a lot of things that are only in the back seat including certain circuit breakers. You also need the RIO to turn on the weapons system and inertial system to have a functioning fighter. However, you could start the jet, close the canopy, and probably take off in a dumb jet without doing all the required procedures if for some reason you had to. I can’t really think of a real world case where you would have to do that without putting somebody in the back seat.’

The stick in the rear seat cannot fly the aircraft. It is like a mouse for the weapons system. It controls the cursor on the displays and can move the position of the radar and TCS (Television Camera System) and things like that. Pulling the trigger is like clicking on the mouse to place things or lock onto things.

Is it possible to fly an F-14 alone without RIO (or another back seater doing the aforementioned things)?

‘It was possible but probably not legal if a transponder was required,’ says John Chesire, former US Navy F-14 Tomcat pilot, on Quora.

‘The RIO was the only one who could turn on and manage the transponder which was most always required. We used to laugh about this as pilots. RIOs had a lot of say in the development of the F-14. We figured that they made it hard to fly without them, which we could do in the F-4.’