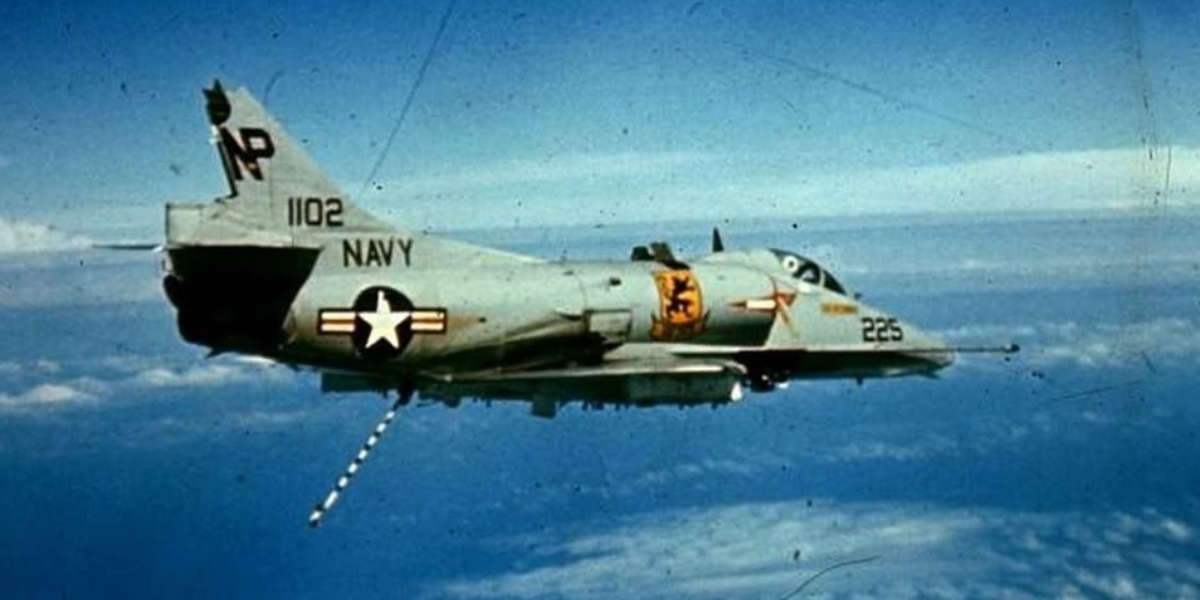 ‘All the warning lights were on, including the fire-warning light. The A-4 was on fire. There was smoke coming out of my oxygen mask,’ Lt(jg) Al Crebo, former US Navy A-4 Skyhawk pilot.

On Apr. 25, 1967 Lt(jg) Al Crebo of VA-212, aboard Bon Homme Richard was part of a raid against an ammunition depot near Haiphong. After approaching the target and climbing to 8000 ft to begin his delivery dive, Crebo had an SA-2 explode nearby, as he recalls in Peter Mersky’s book US Navy and Marine Corps A-4 Skyhawk Units of the Vietnam War;

`Our target for the last strike of the day was the Kien An ammunition depot near Cat Bi airfield, on the southern edge of Haiphong. I had an uneasy feeling about this strike for a number of reasons. The question of strike tactics was the subject of a great deal of discussion at early stage of the cruise. Some people thought we should coast in low at about 3500 ft, then climb to 7000 ft over the target for the attack. Such an approach would allow us to stay out of the SAM envelope for as long as possible. The problem with this tactic was that aircraft heavily loaded with ordnance would be over the target at low speed. We therefore discarded this approach in favour of a high coast-in from about 14,000 ft, with a gradual acceleration and decreasing altitude to arrive on the target area at high speed.

‘We never made repeated runs over the same target. High steep, fast, and once proved much more effective. However, it was early in the cruise, and we had not reached that level of sophistication.

‘Another concern was the fact that there were two strike groups ahead of us in the general area. There would be no element of surprise. Also, the second strike group would be on its way out while we were in our way in.’

Crebo’s group consisted of six A-4Es from VA-212 — a four-aeroplane division and a section of two. VA-76 contributed four A-4Cs as flak suppressors. Two more VA-212 ‘Scooters’ went along as Iron Hand aircraft, carrying Shrikes. Four F-8Es from VF-211 would also furnish flak suppression, while four F-8Cs from VF-24 would fly TARCAP, guarding against MiG interceptors. VA-215 Skyraiders were tasked with SARCAP duties to protect downed pilots. There were KA-3 tankers and RF-8s along as well. It was a big strike.

Although Lt (jg) Crebo was a junior pilot, arid was assigned the number six slot, he had considerable A-4 time, having made a previous Med cruise with VA-64 aboard the newly commissioned USS America (CVA-66).

Coasting in, the strikers began receiving SAM warnings from the Air Force EC-121 orbiting off shore. The code word ‘Hallmark’, meaning SAMs, flooded the airwaves. Inside their cockpits, the A-4 pilots also heard the warble of their ALQ-51s — devices that detected the fire-control radar of the SAM launch battery. Flak was also beginning to appear. Grey and black puffs of 37 mm and 85 mm AAA dotted the sky. It was going to be a rough delivery.

The ALQ-51 was giving off a high-pitch warble and its red SAM light was also glowing. The Shrike jets and TARCAP detached and climbed to 20,000 ft. The attack plan was to roll in to the east and then be on course for the run-out back to the Gulf of Tonkin. Crebo recalled;

‘Because of the climb we were at a very low speed over the target. It seemed like we were just hanging there for an eternity below 2S0 knots. I was number six on the roll-in, and when my jet was in a 90-degree bank, I was hit by a SAM coming into the west on the blind side. It felt like a moderately severe automobile accident. I was not surprised that I was hit because we were hanging over the target, exposed. I was also mildly angry with myself and the enemy.

‘The first thing that happened was that another missile passed by a few yards off the starboard side of my aircraft. SAMs were proximity-fused. And were supposed to detonate when they came near an aircraft. Had that missile blown up, it would have ruined the rest of my day. The fact that the SAM did not detonate close to me was pure luck. The missile finally blew up ahead of me in a huge puff of orange smoke.

‘At this point, virtually all the warning lights were on, including the fire-warning light. The A-4 was on fire. There was smoke coming out of my oxygen mask. When that second SAM detonated, I thought, “So that’s what a SAM smells like when it goes off’. After dismissing that ridiculous thought, I realised I was smelling smoke and tore off one of the mask fittings from my helmet.

‘I was still hanging over the target. I was thinking first and foremost about escape. I knew the best way to convert altitude to airspeed was to dive. I did have a good view of the target and could see the other A-4s completing their runs. Out of revenge and sell-preservation, I decided to attack on my way out to the water.

`Just alter I had delivered my weapons in a rather steep run, the aeroplane became uncontrollable and rolled beyond 90 degrees to about 135 degrees of bank — I had lost hydraulics. I thought I was a dead man! I wondered what hitting the ground at this speed would feel like. I pulled the manual flight-control disconnect handle, and with considerable effort, I rolled wings level and pulled out of the dive.’

Crebo was now at low altitude as he headed for the gulf [Gulf of Tonkin]. Several of his squadronmates joined on him as he struggled to make the relative safety of the water. They stared in disbelief’ at the battered A-4. It was trailing fuel and its rudder was gone, as were several fuselage panels. Later, Crebo learned that his horizontal stabilisers were skewed several degrees out of alignment – no wonder his Skyhawk was having trouble staying straight and level. When he tried to extend his gear and hook, only the hook and nose gear came down. Without his main gear, the option of trapping back aboard CVA-3 1 was gone. Ejection was now the only choice.

As Crebo tried to reach 10,000 ft, the engine finally ran out of fuel or perhaps seized, at 6000 ft. Nose heavy, the Skyhawk dived for the water, making it impossible for Crebo to reach his face curtain to eject. He went for the secondary handle between his legs — a feature of most ejection seats, and included for just such a situation.

Crebo was rescued after only four minutes in the water, and incredibly was back on flight status the next day! He received the Silver Star for this mission. Al Crebo completed his tour with more than 200 missions to his credit. Leaving the Navy, he finished his medical training and became an ophthalmologic surgeon. The photographs of his flight out of North Vietnam became some of the classic images of the air war. 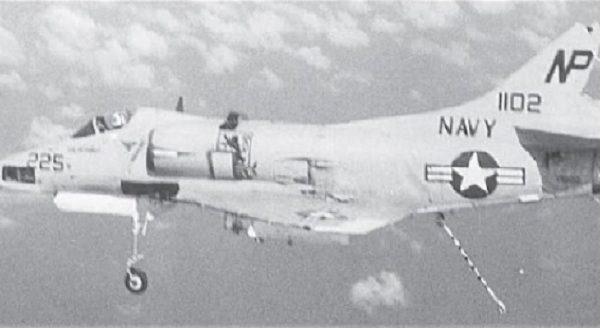 Takes a Licking and Keeps on Flying: the story of LTJG Al Crebo and his Stricken A-4 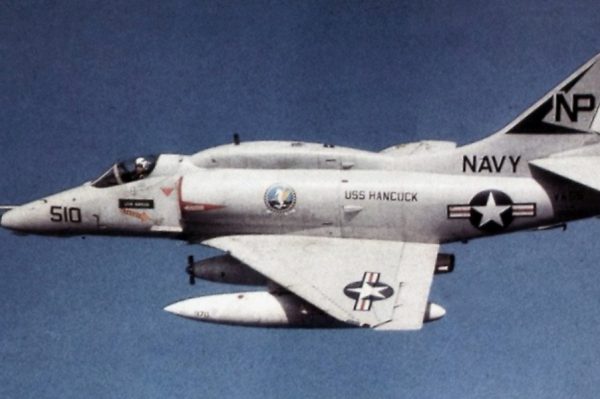 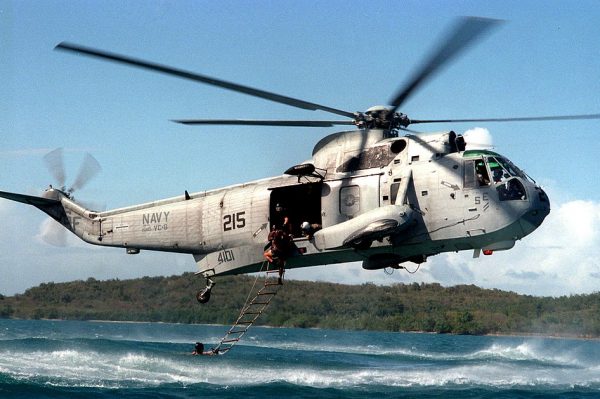