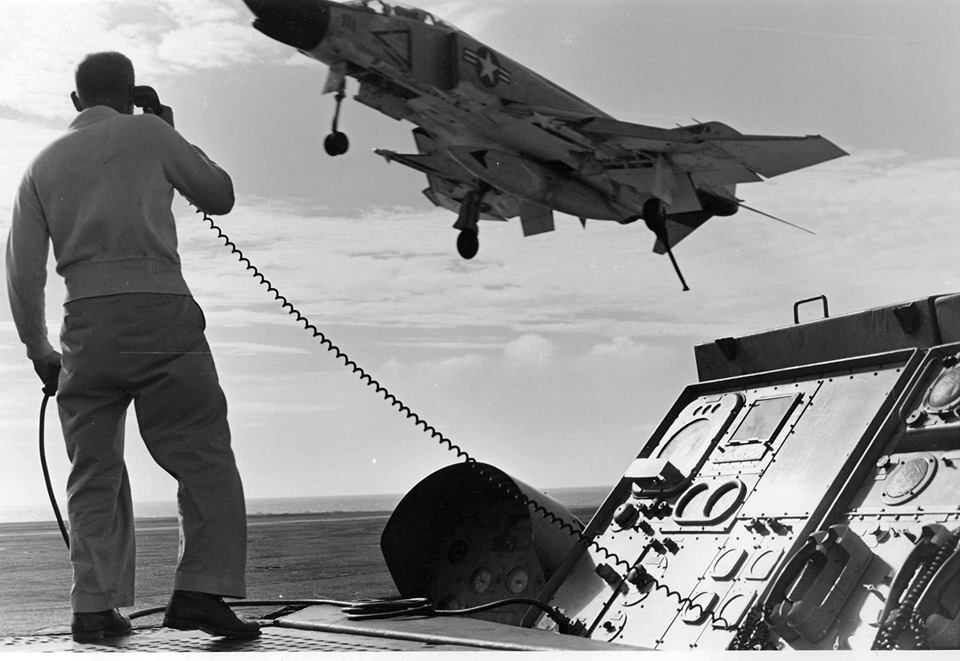 In the end, all 35 planes landed safely. When I talked to several pilots afterwards, they reported that they never saw the ship once.

On a cloudy afternoon we launched 35 planes, a mixture of F-4s, A-6s and A-7s, into North Vietnam. Once the launch was complete I went back to my job of repairing avionics equipment. I was working immediately below the angle flight deck.

After a few hours the Captain spoke over the 1MC, the intercom heard throughout the ship. “We will be leaving Yankee Station and exiting the Gulf of Tonkin. There is a typhoon (hurricane) making its way up the coast and threatening to box us in. Rough seas ahead and only recovery personnel (people who help the pilots land) are allowed on the flight deck.”

The bad weather moved quickly and the sun was setting when the worst part of the typhoon reached us. Meanwhile the aircraft returning from their combat mission were running low on fuel and couldn’t make it to the nearest land base, Da Nang.

We were their only choice.

When the ship hit the next wave we were almost knocked off our feet. Watching through the ship-wide closed circuit monitors we could see the ocean spray sweep over the top of the island through the fast-approaching darkness. Even though the Midway was the most stable carrier in the fleet at that time, we were being tossed by 60 ft waves and 100 mile per hour winds like a cork in a storm.

It was pitch black when the planes came within range.

The typhoon was still raging around us, eliminating any hope of visibility for the pilots and aircrews. The closed circuit monitors were working fine showing the aft view but the screens showed only the darkness outside. Around the ship, personnel of all ranks were glued to the screens, waiting for our guys.

A flickering white dot became visible – the landing light of the first plane. If the captain was trying to keep the ship on straight and level, we couldn’t tell. We were being tossed mercilessly and we started praying.

The landing light became brighter as the plane got closer.

In the cockpit the pilot was fighting the unpredictable winds, staring at the red backlit instruments that told him where he was and where the ship was. He could not even see the familiar lighting of the ship’s landing area due to the storm. From experience he knew the ship was constantly pitching and rolling, and it took every bit of concentration to remain calm and focus on flying the fighter. In the rear cockpit, the Naval Flight Officer (NFO) used his radar and navigation instruments to help guide the pilot on the perilous descent.

On the flight deck, Landing Safety Officers (LSO) strained to evaluate the approach.

There wasn’t much anyone could do but hope that the aircraft arrived when the flight deck was relatively stable.

The plane hit the deck and caught a wire. The tail hook, firmly pressed against the steel by 3000 pounds of force, dragged the wire as it slowed to a stop. The din was incredible, as it happened just 5 feet above my head, and the force of the arrestment shook the whole ship. The noise and brute force were routine parts of a carrier landing, and on this night they were welcome announcements of the first safe recovery.

Guided by precision signals from the expert flight deck crew, the plane taxied to the bow. The landing area was quickly clear and made ready for the next aircraft, and we could already see its landing light piercing the stormy night sky.

Each plane repeated this deadly drama. A few missed the wire and had to go around for a second attempt. But in the end, all 35 planes landed safely. Our prayers were answered. When I talked to several pilots afterwards, they reported that they never saw the ship once. 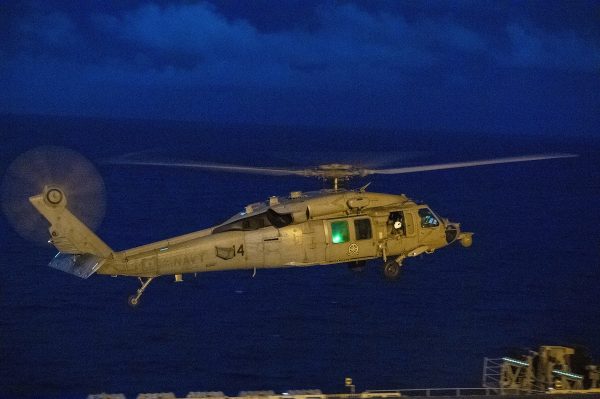 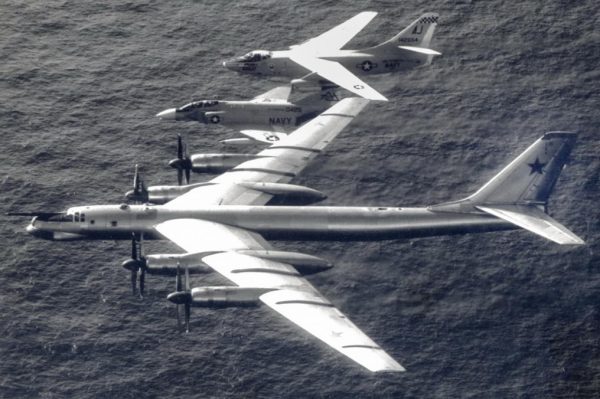