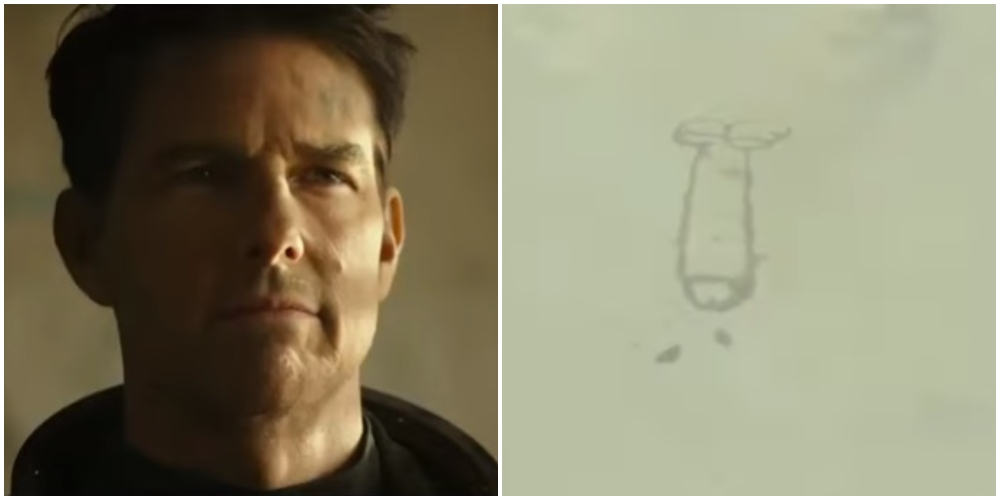 The Alternate Trailer shows Maverick flying his Super Hornet wildly over a beach, sending sun loungers flying everywhere and drawing a penis shape in the sky.

The funny video in this post features an alternate trailer for Top Gun: Maverick and it’s an understatement to say that Tom Cruise is cockier than before.

In July Top Gun fans were thrilled when the trailer for the long-awaited sequel arrived and featured Tom, 57, reprising his role as daredevil pilot Pete “Maverick” Mitchell, 34 years after the original installment.

The official two-minute teaser boasts blockbuster scenes with Maverick taking to the skies in F/A-18 Super Hornet and F-14 Tomcat fighter jets, chasing his need for speed on his motorbike and attending a funeral.

But if you wanted something a little more, well, light-hearted, one savvy person on the internet has created the alternative trailer you never knew you needed.

And it is wild.

The revamped version takes a snippet from the original trailer where Maverick is being scolded by Ed Harris, who says: ‘You should be at least a two-star admiral by now, yet here you are… Why is that?’ Maverick’s response: ‘It’s one of life’s mysteries.’

Cut to the next scene – which definitely didn’t appear in the original trailer – of Mav flying his Super Hornet wildly over a beach, sending sun loungers flying everywhere and drawing a penis shape in the sky.

Maverick was always cocky but this takes the biscuit.

Edited scenes features one beach-goer saying in awe: ‘This guy is crazy, look what he’s doing man,’ before the clip closes with a drawing of a penis.

How do we get this version in cinemas? Rated “R” of course.

According to Metro.co.uk, it comes after fans were disappointed to see that an original Top Gun star was missing from the official trailer.

Kelly McGillis, who played Charlie, Maverick’s love interest in the 1986 movie, was noticeably absent from the teaser and the actress later revealed that she was never approached to reprise her role.

Speaking to Entertainment Tonight, Kelly said: ‘I’m old and I’m fat and I look age appropriate for what my age is and that is not what that whole scene is about.

As we have previously reported, pictures taken on Nov. 2, 2018 in Los Angeles showed Tom Cruise filming motorbike scenes with Jennifer Connelly for the Top Gun: Maverick.

Revealing whether she would be attending the Top Gun: Maverick premiere, McGillis replied: ‘If and when it did happen, I would have to assess where I am, what I’m doing, what’s going on …

‘I can’t project what I would or wouldn’t do in the future. I have no idea because I don’t know where I’ll be.’

Maybe she can be edited into the alternative trailer? Just keep it PG, though.