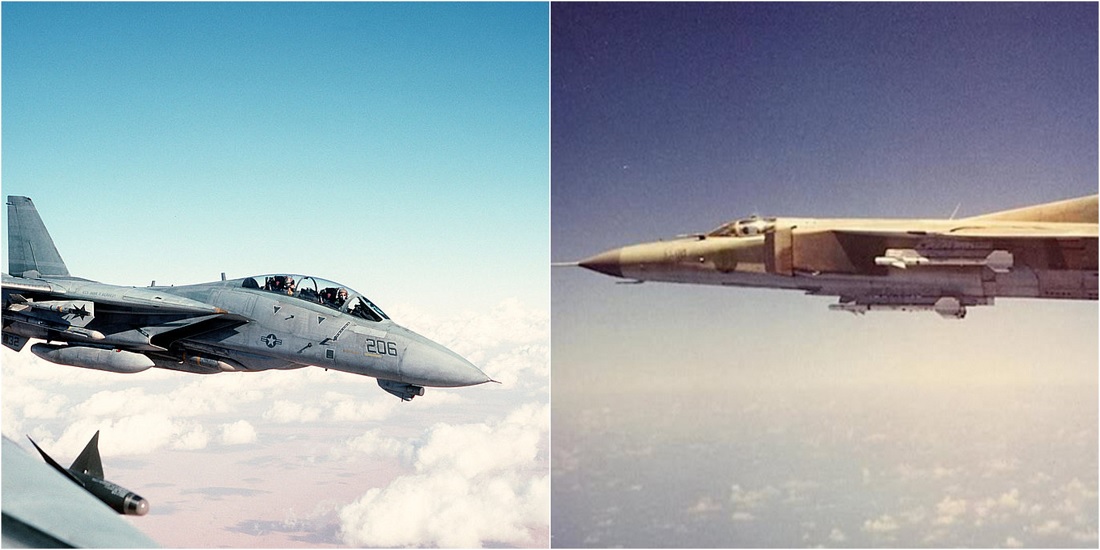 After returning to the carrier, both the F-14s received single FLOGGER ‘kill’ markings above the nose MODEX, although these were removed by the time the jets returned to Oceana on Jan. 31

The on station E-2C Hawkeye of VAW-126 (callsign CLOSEOUT) detected two streamed pairs of Libyan fighters launching from the base at Al Bumbah, with GYPSY 207 subsequently leading the intercept as Enright identified them on his own radar at a bearing of 175 degrees, range 72 nautical miles, flying at 10,000 feet. As the Libyan fighters – what were soon confirmed on the Tomcats’ TCS screens as being fully armed Libyan MiG-23 FLOGGERs – continued north, the F-14s went through a series of manoeuvres to offset the MiGs, which would then re-position a number of times to achieve a head on, forward quarter missile firing solution thus confirming hostile intent – and satisfying U.S. Rules of Engagement for the F-14s to engage. To achieve a better radar lock and to remove ‘clutter’ from the ocean below, both Tomcats descended below the MiGs’ altitude – eventually down to 3,000 feet – as they converged.

The trailing pair of FLOGGERs tracked northwest, presumably intent on engaging the VF-14 Tomcats (although nothing transpired), while the lead pair continued towards the VF-32 aircraft. At some 35 nautical miles separating them, the Kennedy Battle Group commander broadcast the approval to fire in self defence, that call coming shortly before the lead MiG turned into GYPSY 207 for a sixth time and closing inside 20 miles. At twelve then ten miles range, GYPSY 207 expended single AIM-7 Sparrows against the first FLOGGER which both failed to lock onto their target. Next GYPSY 202 had more success, taking out a MiG-23 with an AIM-7 at a range of five miles. GYPSY 207 now switched to an AIM-9 Sidewinder at one mile and achieved a direct hit on the remaining FLOGGER. After returning to the carrier, both aircraft received single FLOGGER ‘kill’ markings above the nose MODEX, although these were removed by the time the jets returned to Oceana on Jan. 31; Kennedy docked at Norfolk the following day. The CO’s aircraft GYPSY 201 (BuNo 162694) did, however, return to Oceana with Libyan flags painted next to the names (of Connelly and Collins – leading some authors to later believe they were in the same aircraft during the actual engagement) on the canopy rail. As details of the engagement were gradually declassified, double MiG-23 silhouettes were added on the full colour schemes applied to both CAG and CO birds at the end of 1989.

Below is the transcript from the engagement (along with the dogfight footage). As told by Craig Brown in his book Debrief: a complete history of U.S. aerial engagements 1981 to the present, inter-cockpit communications are annotated, otherwise all transcribed communications are actual radio transmissions. Here is the cast of characters:

CLOSEOUT- “Roger ACE, take it north.” (ACE was the call-sign for USS Kennedy A-6 Intruder aircraft)

207 Pilot- (inter-cockpit) “Looks like we’ll have to make a quick loop here.”

CLOSEOUT- “Alpha Bravo this is Closeout.”

(The look-down capability of the MiGs radar and weapons is nowhere near as good as the F-14’s, hence, the Tomcats wanted to get below the MiGs altitude.)

207 RIO- “Roger, bogies have jinked back into us now, now lets come starboard 30 degrees the other side.”

207 RIO- “Okay, bogies have jinked back at me again for the fifth time. They’re on my nose now. Inside of 20 miles”

Garbled- “The pilot’s ejected out of the second one.”

207 Pilot- “Roger. the other chute is high up, just to the right of the first splash….” 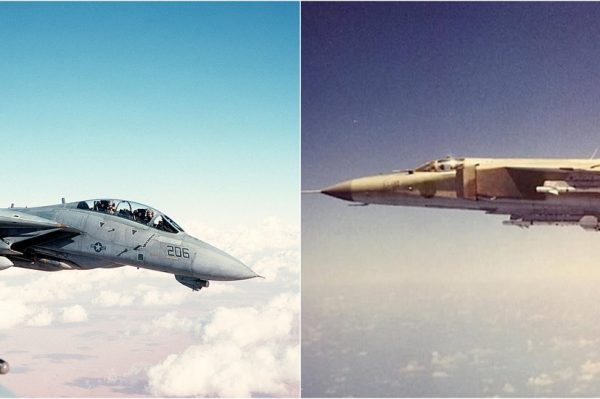 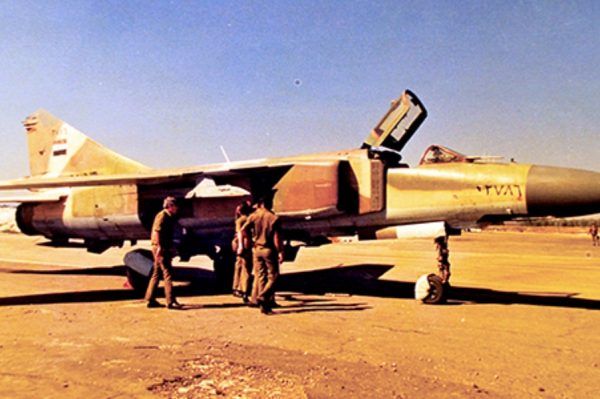 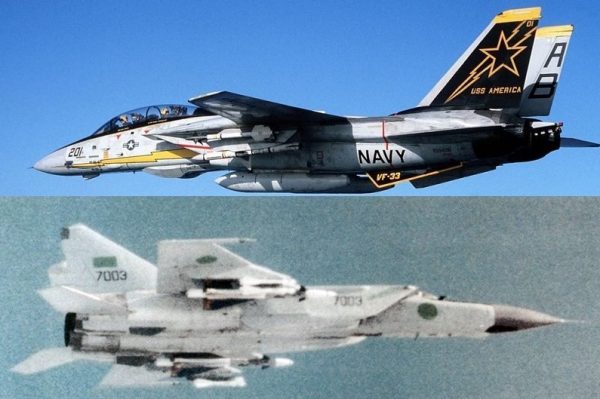