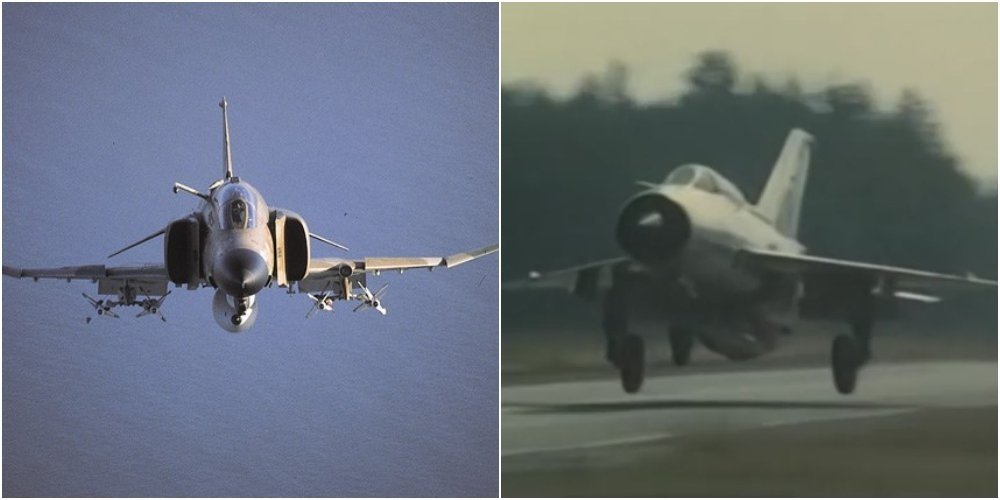 “Seconds later we saw them, two MiGs. Crossover and the two of us engaged them. One MiG disappeared the other MiG remained for a 1-vs-2 air combat,” Gur, former Israeli Air Force F-4 crew member.

During the Yom Kippur War the Israeli Air Force (IAF) actually faced an Arab coalition, rather than the Egyptian Air Force in the south and the Syrian Air Force in the north. Fighter squadrons from Algeria, Iraq, Libya, and North Korea deployed to Egypt prior to October 1973. The North Korean MiG-21 squadron was based at Bir Arida to defend Egypt’s south. The North Korean MiG-21 pilots did not engage Israeli aircraft until Dec. 6, 1973.

That day two Kurnass pairs from two squadrons, 69 and 119, were scrambled to the Gulf of Suez sector. The pairs were teamed together, with the 69 pair (Shadmi-Gur, Shpitzer-Ofer) leading the 119 pair. Meir Gur recalls in Shlomo Aloni & Zvi Avidror book Hammers Israel’s Long-Range Heavy Bomber Arm: The Story of 69 Squadron:

“We were fished out of a lecture and were briefly briefed: something was cooking down south, go there. No unusual preparations, no more details. We were part of a large-scale operation, and our mission was to patrol. We flew to the area at high altitude and flew a high altitude patrol. The sky was not clear; visibility was not good, cloudy and misty. We patrolled for a long time, and we were already low on fuel when we were vectored in and out, flying west into Egypt, turning northwest and exiting. We did not penetrate too deeply into Egypt but we did it a couple of times. Then we were told to look for targets; our radars did not function that well in a high-to-low search. We flew at 20,000 to 25,000 feet, but I managed, to see a couple of blips down below, very difficult to lock. GCI vectored us to engage. We jettisoned external fuel tanks and flew a large racetrack pattern. Still seeing the blips but range did not decrease — they probably flew a similar pattern at low altitude. It was very difficult track that blip against ground clutter, but we managed to do so and finally came within range for an AIM-7 launch; shoot down mode, not very good. Even more problematic was the mist that prevented us from seeing our wingman so we had doubts. We decided not to launch.

“Seconds later we saw them, two MiGs. Crossover and the two of us engaged them. One MiG disappeared the other MiG remained for a 1-vs-2 air combat. The MiG pilot was extraordinarily good, flying wild and reacting time. He was alone against the two of us and he attempted to draw us into a slow speed fight, but we insisted up maintaining high speed. All that time the 119 pair was flying overhead, asking politely but firmly, ‘would you step aside please?’

“We did not step aside. We kept exhausting this Korean pilot; obviously at the time we did not know he was Korean. Anyway, we got into AAM launch position and launched an AIM-9D. A split second later another AIM-9D flashed by me not more than 200 meters away. Shpitzer was in similar AAM position but slightly behind us. Considering the poor weather this was an unpleasant situation, as he launched slightly behind a Kurnass flying with two afterburners. When I saw their AIM-9D flash by I panicked; we could have shot down each other since were so eager.

“Our AIM-9D homed perfectly. The AAM exploded, we pulled up, and the MiG emerged from the explosion flying seemingly intact. A second explosion followed Shpitzer’s AAM, and again the MiG emerged from fireball and continued flying. We were already desperately low on fuel so we disengaged. As we turned east I looked back over my shoulder. The MiG turned west, descended to low altitude, and flew while trailing white smoke. I did not see him crash, but as we crossed the coastline something else grabbed my attention as I scanned the sky behind us. Suddenly I saw the characteristic trail of a SAM and then a huge explosion at roughly 20,000 feet. I monitored radio transmissions and I knew that of our aircraft already disengaged, so I said to my pilot `they shot down one of their aircraft!’ From my Yom Kippur War experience I figured that what I saw was a SAM exploding a fighter. I did not see the fighter because visibility was poor, but I clearly saw the missile’s trail and the explosion.

“By the time we landed we were notified that ‘our’ MiG crashed. We were awarded a shared kill, as the MiG was split between us and our wingman. I again reported what I saw on our way back, and shortly afterwards IAF Intelligence confirmed my story, the Egyptian Air Defense Force shot down a MiG-21.”

Hammers: Israel’s Long-Range Heavy Bomber Arm: The Story of 69 Squadron is published by Osprey Publishing and is available to order here.