Log In Sign Up
Homepage Aviation HistoryThe strange case of the first kills scored by RSAF (or USAF?) F-15 pilots 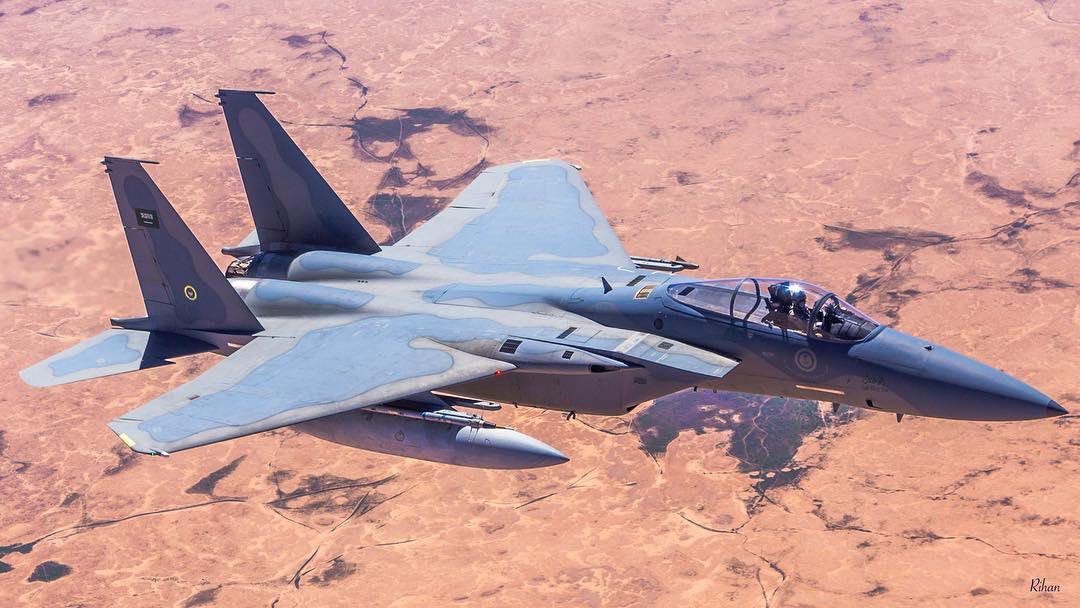 The strange case of the first kills scored by RSAF (or USAF?) F-15 pilots

Following the interception of radio traffic between the F-15s and the AWACS, Iran later claimed — logically — that the pilots aboard the two Eagles were not Saudis, but Americans

The Royal Saudi Air Force (RSAF) purchased 46 F-15Cs (minus some of the aircraft Tactical Electronic Warfare System elements and various sensitive radar modes) and 16 F-15Ds in 1983 under the Foreign Military Sales (FMS) programme Peace Sun. The purchase followed a concerted effort by the Saudi monarchy to close a gap in capabilities between the RSAF and the Islamic Republic of Iran Air Force (IRIAF) F-14 Tomcat fighters.

There were serious political considerations resulting from Peace Sun that the U.S. government had to consider, not least of which was the reaction the sale was bound to have elicited from the ever watchful Israelis. In order to minimise those tensions, RSAF Eagles were degraded to make them less capable, particularly against U.S.-manufactured avionics and weapons systems.

The RSAF’s first kill with the F-15 came amidst heightened tensions with Iran, and was conducted in the most extraordinary manner.

Indeed, controversy surrounds the incident to this very day.

On Jun. 5, 1984, an IRIAF P-3F Orion detected merchant ships sailing along the Saudi side of the Persian Gulf, south of Lavan Island.

The Iranians had been waging a war of attrition against Iraqi oil tankers as part of the Iran—Iraq conflict, and the IRIAF had now been ordered to attack vessels trading through Saudi Arabian and Kuwaiti ports too — both countries were covertly supporting Iraq in the war against Iran.

As explained by Steve Davies in his book F-15C Eagle Units In Combat, two IRIAF F-4E Phantom IIs from TFB 6 (61st TFW) were scrambled to attack the vessels, only to be detected soon after taking off by a U.S. Air Force (USAF) E-3 AWACS operating out of Saudi Arabia. Meanwhile, two RSAF Eagles (one F-15C and one F-15D) from No 6 Sqn were already airborne conducting a training flight with a USAF KC-10A Extender tanker. Aware that the merchant shipping was in imminent danger, the AWACS controller instructed the Eagles to leave the tanker track and vectored them towards the menacing F-4s.

Getting the RSAF Eagle pilots to intercept F-4Es was no mean feat. It is believed that the controllers on board the AWACS had to plead with the Eagle pilots to do as they asked. Indeed, it was only after USAF instructor Capt Bill Tippin, sat in the back seat of the F-15D, encouraged the Saudis to go for the intercept that they accepted the tasking. As the F-4Es neared the Saudi island of al-Arabia — some 48 miles north of al-Jubayl naval base — on a southerly heading, the two Eagles engaged them head-on.

Under Tippin’s guidance, and taking vectors from a Saudi officer on board the AWACS, the Eagle pilots finally obtained radar locks that allowed each to fire an AIM-7 Sparrow. Both missiles guided, downing one F-4E in a huge explosion and severely damaging the other. The latter aircraft limped away heavily damaged, but its pilot managed to land at an emergency airstrip on what is today the Iranian holiday resort of Kish Island.

The crew of the lost F-4, 1Lts Hamayoun Hekmati and Seyed-Cyrus Karimi, did not attempt to eject and perished in the explosion.

Following the interception of radio traffic between the F-15s and the AWACS, Iran later claimed — logically — that the pilots aboard the two Eagles were not Saudis, but Americans. The incident has never fully been explained by either the Saudi or U.S. governments, but one has to wonder whether Capt Bill Tippin may have had a greater role to play in the engagement than has actually been conceded.

Speculation that Tippin may have actually been flying the F-15D during the engagement could indeed be correct, although there is no way of actually releasing ordnance from the back seat of the D-model, leaving little doubt that it could only have been the front seat pilot who actually fired the AIM-7 that scored the kill.

Noteworthy further details of the engagement have been revealed by General Spencer M. “SAM” Armstrong, a highly decorated USAF command pilot with over 4,500 flying hours, who was commander of the U.S. Military Training Mission to the Royal Saudi Air Force from July 1983 to July 1985. It is during this time the air engagement between Saudi F-15 Eagles and Iranian F-4E Phantoms took place.

When the general was asked about the involvement of USAF pilots he was quick to respond. “In short, there were no USAF pilots involved except in reviewing the film for the RSAF.” Gen. Armstrong further stated he knew the names of the USAF F-15 pilots in his command and could not recall a Capt. Bill Tippin.

The following narrative regarding the events of Jun. 5, 1984 is a verbatim account of the incident as presented by Gen. Armstrong to Donald J. McCarthy, Jr. in his book The Raptors All F-15 and F-16 aerial combat victories:

“The war between Iran and Iraq was really hot during my two years. Shortly after I got there, the Iranians sunk an Iraqi oil tanker in the Gulf and the Iraqis struck back with their French-made Exocet air-to-surface missiles—the “tanker war” was well underway. The Iranians did not have us to maintain their aircraft anymore so their equipment was in poor shape. The Iraqis soon had the advantage in this war on the Gulf. The Saudis were concerned the Iranians might go after the oil facilities or the desalination plant on the Gulf since the Saudis were assisting the Iraqis. They wanted to maintain an F-15 Combat Air Patrol [CAP], but needed in-flight refueling. We obliged by sending two KC-10 tankers over and the 24-hour CAP was begun.

“Beth [Mrs. Armstrong] and I were having lunch at the Mission Inn in Dhahran when the chief of the Dhahran advisory detachment came hurrying over. He took me aside and said they had reason to believe there had been a shoot-down over the Gulf. Together we hurried dawn to the tactical operation center [TOC], where US personnel manned surveillance radar. He told me on the way it appeared two F-15s had shot down one or two Iranian F-4s. I found Col. [Prince] Turki standing by a radar display, talking to some RSAF F-5s. Iranian helicopters were on the Saudi side of the Gulf, apparently looking for survivors. The Saudis got a lot of their intelligence from people on the oil platforms out in the gulf, and one of them reported the helicopter appeared to have missiles. I was pretty sure they were mistaking the skid on the helicopter for missiles, because these were helicopters we had sold to them years earlier. Turki looked at me and asked if I thought we should order the F- 5s to shoot down the helicopter. Trigger authority had been delegated to Turki, although he had never had to use it. I shook my head and Turki ordered the F-5s to merely shoo the helicopter away.

“When our F-15 pilots had a chance to review the tapes some interesting facts came out. Two Iranian F-14s were headed directly for Dhahran from Busheir while two F-4s had come around the north end of the Gulf and were heading down the Saudi side at low level. The Saudi controller aboard a U.S. AWACS ordered Blue Flight to intercept the F-4s and ordered Yellow Flight—just taking off from Dhahran—to intercept the F-4s. The RSAF major leading Yellow Flight quickly sized up the geometry and ordered Blue Flight to take on the F-4s. The F-14s were merely a feint, as they turned around and went home at the middle of the Gulf.

“The two RSAF lieutenants turned hard left and descended for a head-on pass. The closure speed was about 1,200 mph. The F-15 wingman fired at maximum range for a radar missile and the leader must have had a case of “buck fever,” since he forgot to jettison his drop tanks and fired a missile at minimum range of effectiveness. They observed two explosions, but they could not tell if the missiles hit the F-4s or merely impacted the Gulf. Since radar contact was lost for both F-4s it was reckoned both F-15s achieved kills. The water was shallow where the plane[s] went down, but very murky conditions prevented the discovery of the wreckage. They did find a seat cushion from an F-4. Each RSAF pilot was presented with a Mercedes 500 SEL as a token of appreciation from the king. Later at Taif, Prince Sultan asked me if they shot down one or two aircraft. I replied that it was one for sure and probably both. He replied they were claiming only one since they did not want to necessarily upset the Iranians anymore than they had to.”

The Raptors All F-15 and F-16 aerial combat victories is published by Schiffer Publishing and is available to order here. 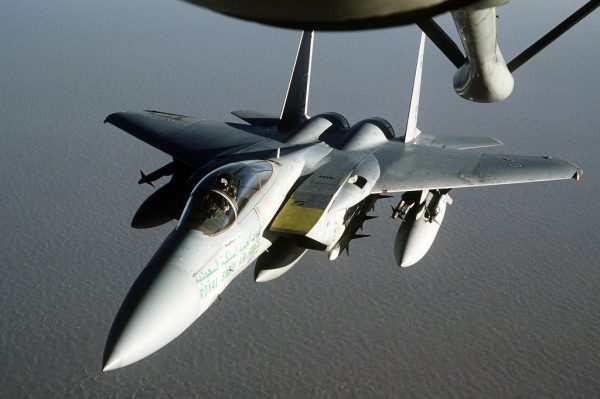 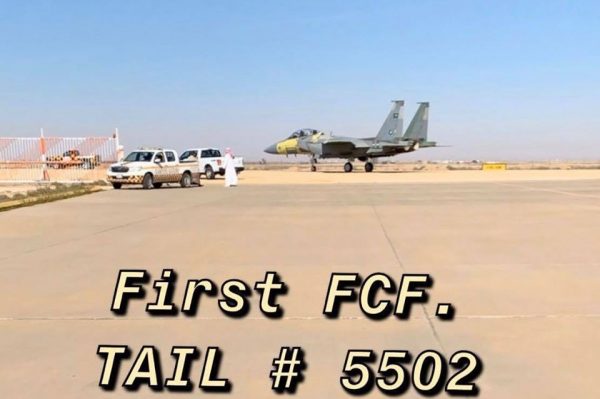