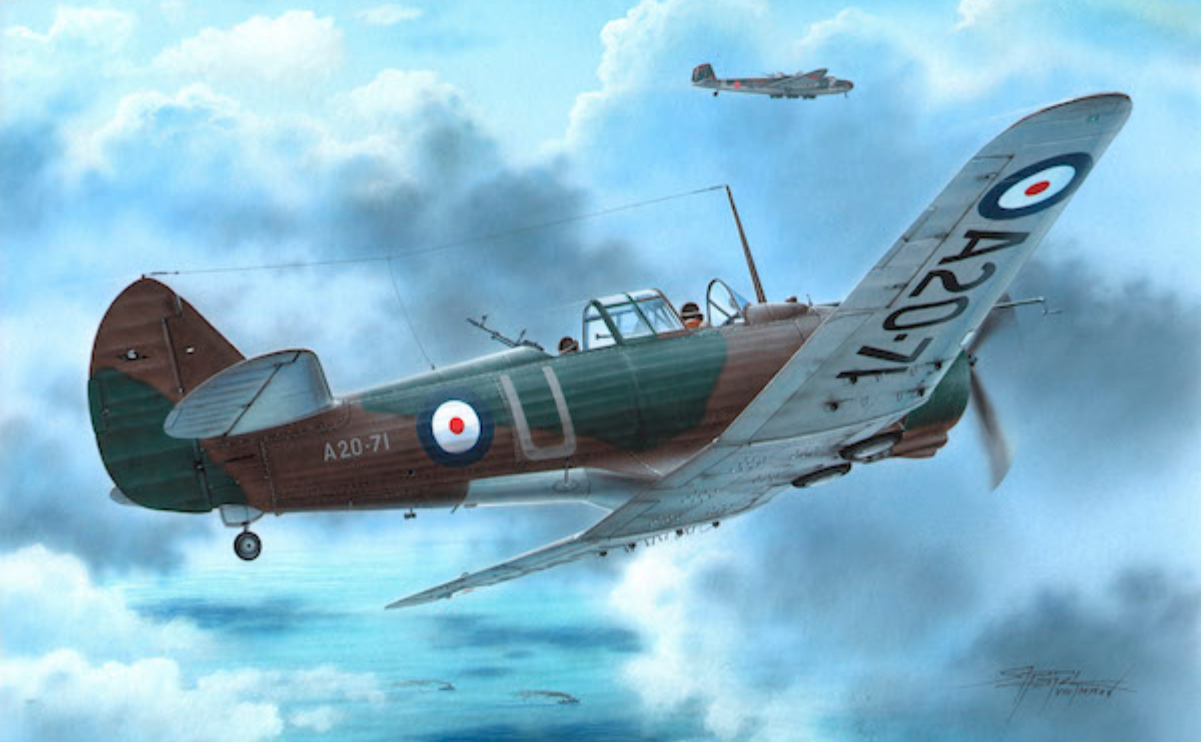 Archer returned to Popondetta where he leapt from his Wirraway and ran across to the control tent where he exclaimed to the Control Officer “Sir, sir, I think I’ve shot down a Zero!”

The swift and decisive defeat of RAAF CAC Wirraway aircraft (an Australian development of the North American NA-16 training aircraft) at Rabaul in January 1942 resulted in the type being permanently withdrawn from use as a fighter. However nearly a year later, the Wirraway would score its one and one only aerial victory. Through a combination of skill and good luck, its pilot scored a quick and decisive kill. To this day the victim is often wrongly proclaimed as a “Zero.”

In November 1942, No. 4 Squadron, Royal Australian Air Force (RAAF), commenced operations in New Guinea with Wirraways serving in an army co-operation role. Aircraft were detached to Popondetta to support the 7th Australian Division and to Dobodura to support the American 32nd Army Division. Meanwhile, on Dec. 18, 1942, the Japanese Army Air Force (JAAF) arrived at Rabaul in the form of sixty 11th Sentai Nakajima Ki-43 Mark I Hayabusa fighters. The contingent constituted the first Imperial Japanese Army (IJA) fighter unit in New Guinea. It arrived with high expectations, having won prestige through it combat history in Indochina.

As explained by Michael John Claringbould in his book Pacific Adversaries Volume One, in mid-December 1942 bloody fighting was occurring around Buna and Gona in norther Papua. Separated from their main logistics base at Port Moresby by the towering Owen Stanley Ranges, the Allies needed additional air transport capacity to support their troops. As stopgap, RAAF Lockheed Hudsons from No. 1 Operational Training Unit, based at Bairnsdale, Victoria, were deployed to Port Moresby for use as transports.

After establishing itself at Rabaul, the 11th Sentai initially confined itself to local patrols before it was tasked to interrupt the critical Port Moresby / Buna air transport corridor. Accordingly the unit’s Nos. 1, 2 and HQ chutai were transferred to Malahang airfield, several miles north west of Lae. They were led there by Major Tanaguchi Masayoshi, the 11th Sentai’s deputy commanding officer and Executive Officer.

Tanaguchi’s personal diary records that on Dec. 24, 1942 he led thirteen Mark 1 Hayabusa on a fighter sweep to Buna, however they were forced to turn back in the face of marginal weather. Two days later on Dec. 26 the weather was still poor, but such was the desperate condition of the Japanese troops in the Buna-Gona pocket that Tanaguchi authorised the mission. This would result in the 11th Sentai’s New Guinea combat debut.

At 0953 hours, fifteen Ki-43s were led southeast at 13,000 ft by Captain Miyabayashi Shigenoi towards Dobodura. It took just over an hour to cover the journey, in a flight dodging cloud any squalls. Upon approaching the area, Miyabayashi descended the formation down to 1,000 feet to strafe several Hudsons they observed taxiing along Pongani’s grass strip. After their first strafing pass a dozen P-40E Warhawks of the US Army Air Forces (USAAF) 9th Fighter Squadron intervened. These had been patrolling above at 9,000 feet when they sighted the intruders.

As the Warhawks dove through overcast, their appearance caused the Hayabusas to scatter. Subsequently a number of separated engagements took place. With the advantage of initiative and altitude, the Americans mixed fiercely with the 11th Sentai fighters and claimed seven destroyed. In fact, only one Ki-43 was lost to the Warhawks: that flown by Sergeant-Major Imamura Ryoichi. In return First Lieutenant John Landers, a veteran of the Darwin air campaign against the IJN’s No. 3 Kokutai Zeros, was forced to bail out after one of the Hayabusas got directly astern of him and badly sieved his airframe with an accurate burst.

As these combats unfolded a number of the taxiing Hudsons decided to make a run for it. Immediately after take-off they tried to flee at tree-top height, but several were targeted by Ki-43s. The Hudson turret gunners fought back tenaciously, and just one of the bombers was lost. This was forced to ditch into Oro Bay after being set on fire, with the loss of two stretcher patients onboard.

Meanwhile, No. 4 Squadron had three Wirraways patrolling the Buna area on artillery observation duties. Among them were Pilot Officer John Archer and his observer Sergeant James Coulston in A20-103 who were in the vicinity of what was termed “the Gona shipwreck” (actually the sunken transport Ayatosan Maru). Just before midday Archer was cruising at 1,000 feet when he suddenly spotted a Japanese fighter approaching below. He later submitted that he delivered a front quarter attack with a five-second burst, firing 50 rounds per gun. With his rear-view vantage, Coulston saw the enemy aircraft strike the water and burst into flames. The aircraft was an 11th Sentai Ki-43 flown by Fuji’i Hiroichi, which had possibly already been damaged by return fire from one of the Hudsons.

Archer returned to Popondetta where he leapt from his Wirraway and ran across to the control tent where he exclaimed to the Control Officer “Sir, sir, I think I’ve shot down a Zero!” To this the Control Officer replied, “Don’t be silly, Archer, Wirraways can’t shoot down Zeros” “Well, sir “, continued Archer, “I went in to look at the wreck off Gona and I saw this thing in front of me and it had red spots on it, so I gave it a burst and it appeared to fall into the sea.”

Within minutes, a dozen telephone calls from observers around Gona confirmed Archer’s tory. Archer later stated that he had acted on impulse and was lucky to get in the critical first burst. Not long afterwards squadron headquarters at Bomana ‘drome, Port Moresby, received the inevitable elated signal from Popondetta which read,

“Archer has shot down one Zeke, repeat one Zeke. Send six bottles beer.”

Australian soldiers from the 2/14th Battalion swam out to the wreck two days later and retrieved Fuji’I’s body from a depth of three metres. They reported that the pilot had probably been killed instantly by a head shot.

Was Archer’s shot lucky or skilled or both? Fuji’i was retiring from the fight low, slow, and alone, suggesting that either he or his fighter may have been hit, or perhaps he had become disorientated in the poor weather and was considering the best way home. Regardless, Archer’ accuracy was first class, bolstered with some good luck. A diving front quarter attack is hard to execute, especially with 0.303-inch machine guns which are essentially a WWI-era armament for a “fighter’. The lengthy five-second burst meant that Archer’s attack was curved and speaks much for his judgment of angle and lead.

The fuselage of Archer’s Wirraway is on display at the Australian War Memorial in Canberra. At the time of publication Archer’s victim is still described erroneously as a “Zero.” This unique victory earned Archer the American Silver Star.