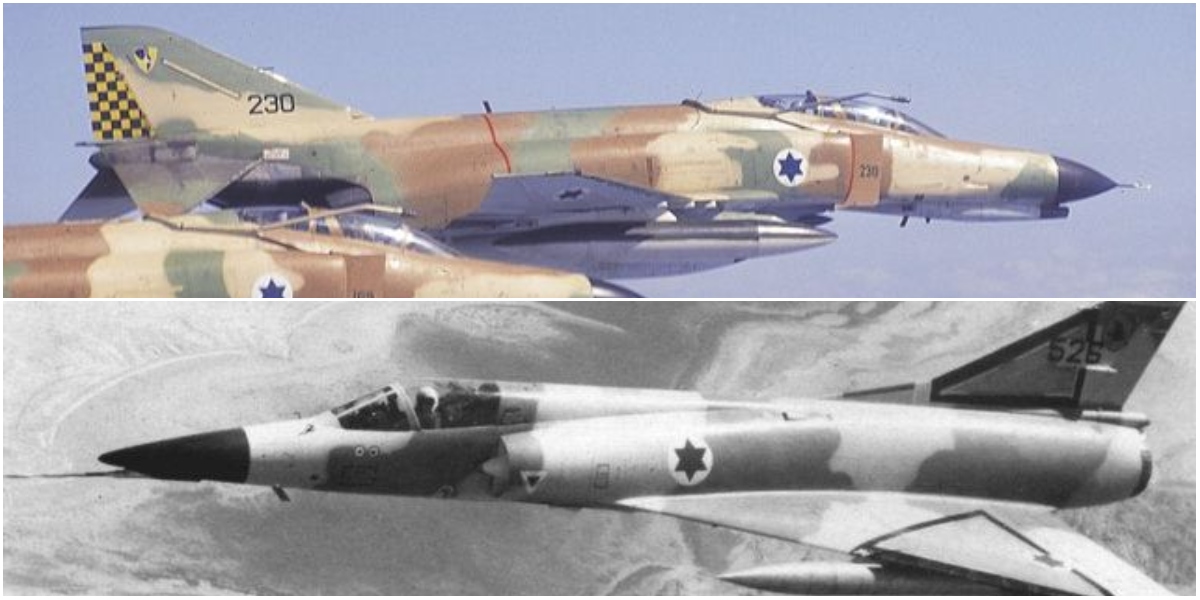 ‘While one of the Mirages from No. 144 Squadron, IAF shot down the F-4E with the call-sign Buffet 2, another went for the Phantom with call-sign Bed 6 and fired at last one missile…’

The majority of narratives about the October 1973 Arab-Israeli War stress that air power did not play a dominant role. The deployment of strong, well-integrated air defences by Egypt and Syria, that caused heavy losses to the Israeli air force early during that conflict, not only spoiled Israel’s pre-war planning, but prevented it from providing support for Israeli ground forces too.

For much of that war, the Israelis flew heavy air strikes on Port Said, on the northern entry to the Suez Canal. Furthermore, they repeatedly attacked two major Egyptian air bases in the Nile Delta – eI-Mansourah and Tanta – in turn leading to some of the biggest air battles of this war.

The actual reasons for Israeli air strikes on Port Said, eI-Mansourah and Tanta remain unclear to this day: there are no Israeli publications offering a sensible explanation, and there are no Egyptian publications explaining the reasoning. As told by Tom Cooper & Abdallah Emran in their book 1973: The First Nuclear War, only a cross-examination of additional reporting provides a possible solution: el-Mansourah was also the base of the only Egyptian unit equipped with R-17E ballistic missiles, known as the SS-1 Scud in the West. As of October 1973, these missiles were the only weapon in Egyptian hands capable of reaching central Israel – and that only if fired from the area around Port Said. While apparently unimportant in the overall context, this fact gains immensely in importance considering reports from the US intelligence services about the possible deployment of Soviet nuclear warheads to Egypt in October 1973.

Two waves of Israeli Air Force (IAF) F-4E Phantom II fighter bombers were tasked to attack Tanta Air Base (AB) to suppress the operations of Egyptian Air Force (EAF) No. 69 Squadron’s Mirage fighters (that were borrowed from Libya and that were deployed at Tanta along with a squadron of MiG-21s) that according to Iftach Spector, the former CO No. 107 Squadron, IAF, caused confusion whenever appearing because they looked like Israeli Mirages.

Leading the way, were six F-4Es from No. 119 Squadron tasked to perform a SEAD strike against Tanta AB air defences. At least a few of the Israeli fighter-bombers managed to bomb air defences of Tanta, although they caused next to no damage because they were intercepted by the Tanta-based MiG-21s.

The second Israeli formation to attack Tanta consisted of 12 F-4Es from No. 107 Squadron — six in the formation with call-sign ‘Buffet’, and six in the formation with call-sign ‘Bed’ — all tasked with bombing the base. Each aircraft was armed with five M-117s, 2 AIM-7s and a single AIM-9D, and carried three drop tanks. In the lead was Spector. The original plan called for his formation to follow those of No. 201 (that previously attacked el- Mansourah) and No. 119 Squadrons by flying well to the north and west over the Mediterranean Sea before turning south and striking its target from north-western direction. However, after hearing on the radio about multiple air combats ahead of him, Spector ordered his crews to ‘cut the corner’: turn south earlier than planned, engage afterburners and accelerate to a speed at which no MiG-21s could follow them at low altitude.

All 12 Phantoms from No. 107 Squadron failed to reach their target. Instead, they fought a series of frantic air combats in the course of which their pilots claimed no fewer than six MiG-21s as shot down. Indeed, the last three of these should have taken place as the Egyptians pursued the retreating Israelis all the way to the Mediterranean Sea — and then under circumstances indicating that several of the IAF crews were lucky that the Soviet-made R-3S missiles were as poorly manufactured as they were.

The retreating Phantoms of No. 107 Squadron were still entangled with MiG-21s, when the drama unfolded, as recalled by Spector:

Worse yet: while one of the Mirages from No. 144 Squadron, IAF shot down the F-4E with the call-sign Buffet 2, another went for the Phantom with call-sign Bed 6 and fired at last one missile. Only a timely radio warning ordering the crew to break prevented the downing of the second Phantom: the crew of the same became convinced it was attacked by one of the ‘Libyan Mirages’, in turn adding weight to the Israeli explanation according to which the aim of the entire attack on Tanta was to suppress operations of the No. 69 Squadron. Spector explained:

‘The reason was a mistaken identification by our Mirage-pilots: it a was late afternoon, and the light was bad. We were entangled with MiGs over there, they joined the battle, weren’t careful enough and… well, such things happen at war.’

Ironically, because they had followed this action with their radars, the Egyptians saw their success as confirmed by the Israeli confusion, as explained by Nabil Shuwakry:

‘We had already noticed that their bombing accuracy was even poorer than during the War of Attrition. Therefore, our primary aim became to force Phantoms to jettison their bomb loads: without bombs, they could not damage our bases or hit our aircraft on the ground. Then they began jettisoning not only their bombs but also their bomb racks on sighting us [airborne MiGs, authors’ note]: that was no professional conduct but a sign of panic. By 14 October, they were so confused they shot down several of their own aircraft over Port Said too.’

At least one of the published Israeli sources about this mission shot indicates that the entire attack on Tanta AB was a ‘huge ruse’, intended to provide Egyptians with a mix of correct and wrong information in the case that some of the involved aircrews were shot down, captured and interrogated. Iftach Spector confirmed something of this kind:

‘Indeed, before that mission, I was ordered to tell my pilots some specific pieces of untrue information – and have them believe it – so that if any of us gets shot down, captured, and interrogated, these stories might be extracted from him. I was told that nobody wanted us to get shot down and this was “just in case”: I am not aware of where this idea came from, nor if the same order was issued to other squadrons.

‘Upon receiving that order, it looked to me as quite a crooked idea, and I hated it. But, the time was too short to argue. I obeyed and provided that information to my crews during the pre-flight briefing. Of course, I lied to them, I couldn’t disclose to them why. During that specific briefing, I fed them that information together with “general information on the war”.’

According to the version about a ‘huge ruse’, the reason why the Mirages from No. 144 Squadron then attacked the returning Phantoms, shot down one and narrowly missed the other was that this was the final attempt to get at least one of the involved F-4E crews captured by the Egyptians. However, Spector left no doubts, about actual circumstances:

‘…During the post-mission briefing, and lo and behold, I realized that nobody (except for me) could recall a word of my lies. In the many technicalities briefed before that mission they simply didn’t listen to my blah-blah. It was “out of context”, unnecessary information. Thus, even if any of them would have been shot down and captured, the lie would have been lost on him. A lesson in itself… Moreover, there is no connection whatsoever between that stupid lie I had to tell my pilots before the mission, and this accident. The Mirage-pilot certainly wasn’t shooting at brothers: nobody would have obeyed such an order – the issuer of which would, most likely, be jailed on the spot. Such stories are conspiracy theories, and rather stupid ones.’

1973: The First Nuclear War is published by Helion & Company and is available to order here.