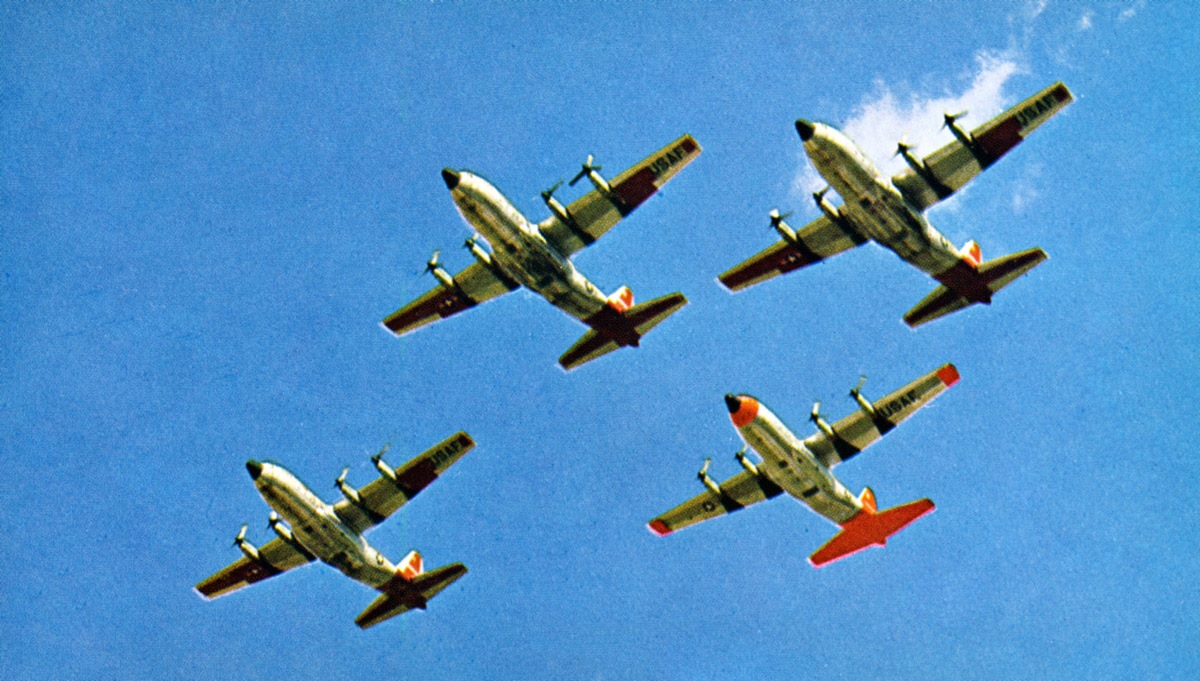 The Story of The Four Horsemen, the USAF C-130 Demonstration Team

During one performance, the number three Hercules lost one of the outboard engines which had to be shut down. The crew feathered the prop and continued with the air show routine without a hitch!

It was tough going if you were assigned to one of the USAF Tactical Air Command’s Troop Carrier Squadrons (TCS) in the 1950s. In the hierarchy of the day, the pilots and crews of the airlift squadrons picked up the still-used sobriquet of “trash-haulers,” while the airmen in the bomber and fighter squadrons flew advanced aircraft that were often the cutting edge of technology and performance. The bomber crews of the Strategic Air Command (SAC) won the lion’s share of the USAF budget in the name of nuclear deterrence and the fighters of the Tactical Air Command (TAC) were setting world records for speed and altitude and carrying the latest in missile and radar equipment.

But the troop carrier squadrons by and large were still flying piston radials in aircraft with technology not far removed from the aircraft of World War 2. Even the long-haul transport crews of MATS, the Military Air Transport Service, had it better than the guys who slogged around on intratheater missions in Douglas C-47 Dakotas and Fairchild C-119 Flying Boxcars. The C-119 was so underpowered that its single engine performance was near-abysmal. Back then, the graduates of USAF flight training with the lowest scores went to the troop carrier squadrons.

As JP Santiago explains in an interesting article appeared on his website Tails Through Time, that all changed when the Lockheed C-130 Hercules made its first flight in Burbank, California in 1954. The Hercules didn’t have the sleekness and speed that its fellow Lockheed stablemates had, but it was tough, practical, and most importantly, powerful. The early model C-130s were hot ships. On the first flight of the Hercules prototype in August 1954, an aircraft with its weight would have usually needed at least 5,000 of runway to take off. The Herk prototype? It leapt off the ground in only 855 feet with the power of four Allison T56 turboprops. Spectators and invited guests were astounded that this portly aircraft had such performance. Lockheed chairman Robert Gross even exclaimed “Look at her climb!”

The first operational C-130As went to the 463rd Troop Carrier Wing at Ardmore AFB, Oklahoma. Pilots were ecstatic about flying a tough transport that handled like a fighter jet. There were even TAC fighter pilots who were transferring to the Hercules. Suddenly Herk pilots could walk into any officers’ club with pride knowing that they had a “trash-hauler” that even the fighter jocks wanted to fly. It’s pretty safe to say that the arrival of the C-130 Hercules was a massive morale boost for the troop carrier squadrons of the TAC.

While the first operational C-130 units were with the 463rd TCW in Oklahoma, the Hercules training unit would be the 314th Troop Carrier Wing at Sewart AFB in Tennessee. There at Sewart would pilots, loadmasters and mechanics be trained on the Herk. While the 314th was still getting operational, flight crews from the 463rd TCW took their new mounts to bases all over the U.S. and participated in airborne exercises with the Army who were also excited about the arrival of the Hercules.

As told by Sam McGowan in his book The C-130 Hercules: Tactical Airlift Missions, 1956-1975, one of the units, the 774th Troop Carrier Squadron “Green Weasels” that was part of the 463rd TCW at Ardmore AFB happened to be at Fort Campbell, Kentucky for a week-long exercise with the 101st Airborne Division. One day the winds canceled a scheduled airborne drop, but four of the 774th TCS’s C-130s were ready to go. So the flight crews took off anyway to make use of the time to get some formation flying practice in and spent several hours flying low over Kentucky and Tennessee honing their skills. On their return to the airfield at Fort Campbell, they made several low passes at high speed and in tight diamond formation. It donned on them- hey, why not form a demonstration team like the Thunderbirds to demonstrate the new Hercules everywhere?

Back at Ardmore AFB, they worked on their demonstration routine and suggested that they fly the routine for the personnel of the 314th TCW at Sewart AFB to show off the new planes that they’d be getting. TAC Headquarters approved the plan and the demonstration was a success. At first they called themselves the Thunderweasels, a combination of the Thunderbirds and the Green Weasels nickname of the squadron, but they settled on becoming “The Four Horsemen” after Knute Rockne’s famous football offensive team at Notre Dame in 1924.

The Four Horsemen won official recognition from the USAF as an aerial demonstration team and from 1956 to 1960 they performed their routine of tight formation flying and sharp turns throughout the United States and even went overseas to Europe and the Far East. During one performance, the number three Hercules lost one of the outboard engines which had to be shut down. The crew feathered the prop and continued with the air show routine without a hitch!

As shown in the following video filmed in 1960, The Four Horsemen were the world’s only four engine per aircraft demonstration team. Flying four C-130As in close formation, the team would perform a number of maneuvers over a twenty-three minute airshow that closed with a bomb burst — or as the team called it, Horseman Burst. The show was performed at an altitude of 500 to 1,000 feet. 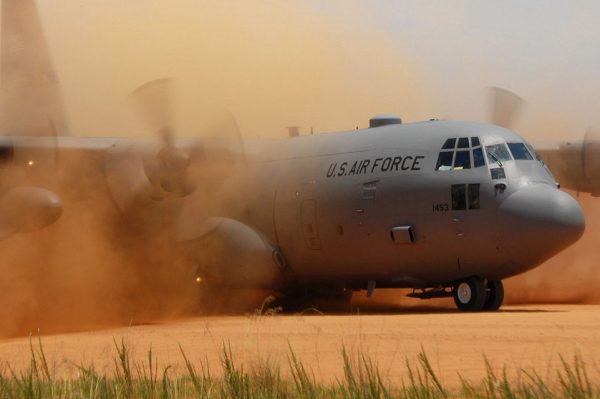