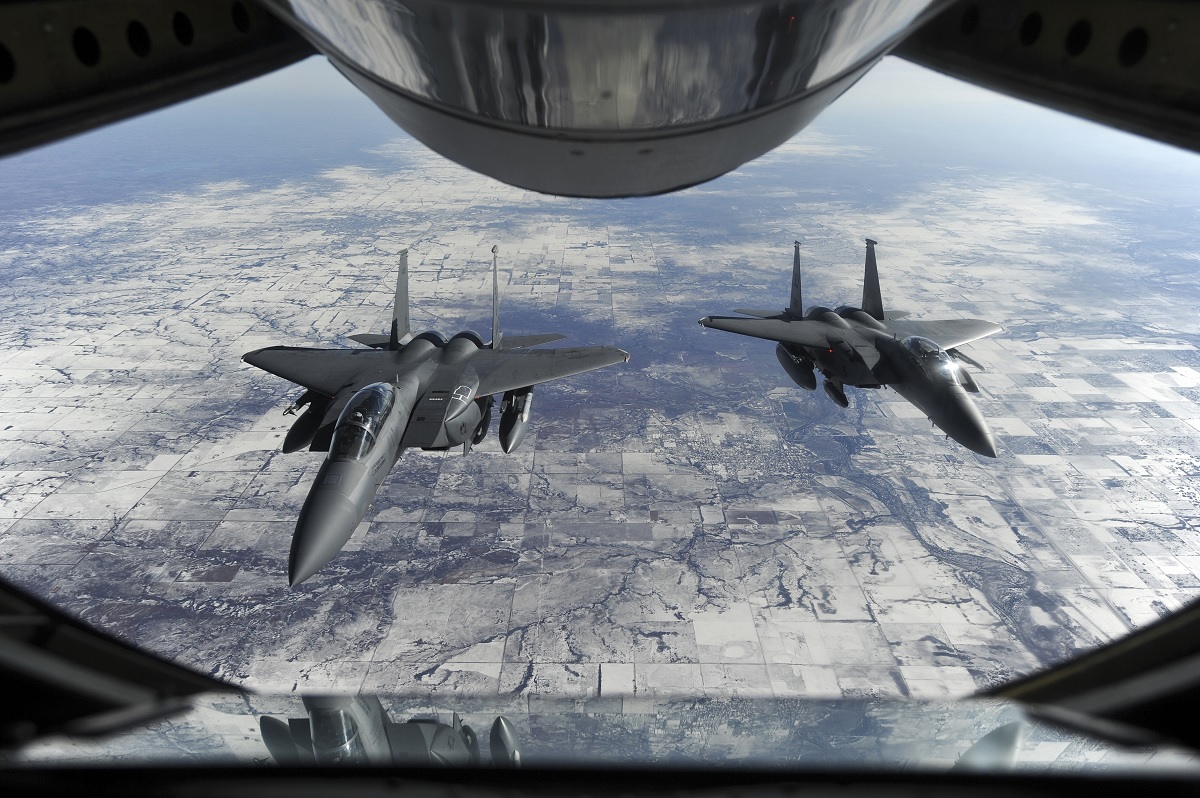 `Crockett 51/52s” historic flight had seen the F-15E fighter bombers refuel no fewer than 12 times, each refuelling giving them an additional 60 to 90 minutes of loiter time.

The F-15E Strike Eagle is the Western world’s definitive multi-role fighter. It has been at the centre of every conflict in which the USAF has been involved since 1990 from Desert Shield to Iraqi Freedom. Not only has it repeatedly struck targets where no other Coalition, NATO or US fighter has been able to go, it has also broken records for mission endurance and effectiveness.

In the wake of the Sep. 11, 2001 terrorist attacks on New York and Washington, DC, F-15Es from the 391st FS/366th Air Expeditionary Wing (AEW), based at Mountain Home, deployed to Kuwait for Operation Enduring Freedom (OEF). During the course of their three-month tenure, four crewmen from the unit entered the history books when they flew the longest fighter combat sortie ever (no exact date for this mission has ever been released by the USAF).

For 15.5 hours – nine of which were spent over the target -‘Crockett 51/52’, a two-ship F-15E flight that was tasked with patrolling a set of grid coordinates over Afghanistan for the usual ‘vulnerability’ time of three hours.

In the lead jet was ‘Slokes’ and ‘Snitch’ (pilot and WSO, respectively) and No 2 was crewed by ‘Spear’ and ‘Buzzer’. Each F-15E carried nine GBU-12s, two AIM-9Ms, two AIM-120Cs and two wing fuel tanks. Once on-station, `Crockett’ flight received a TST from AWACS to contact a Predator UAV control unit. The latter had been monitoring suspicious activity around buildings believed to be Taliban command and control facilities.

‘Each jet set up two different laser codes — No 1 had 1511 on the left CFT and 1533 on the right and No 2 had 1522 on the left and 1544 on the right. The lead pilot released four GBU-12s from his jet, giving us two with the 1511 laser code and two with 1533. We programmed in 1533 on our laser so that we could guide two of their bombs and they had 1511 dialled in on theirs so that they could guide two of ours. This way we took out two buildings, side-by-side, with simultaneous impacts for eight GBU-12s. We actually flew two passes — the first to ensure that we had the correct targets and the second to actually drop the weapons.’

Both targets were effectively neutralised. During the course of this action a lone AAA piece had been firing at the flight, and this too would have been attacked had it not been for the fact that the battery stopped firing at them and the F-15E crews were unable to locate it. One more building was subsequently struck and demolished following a second TST Predator tasking. ‘Crockett’ flight then pressed on with a road reconnaissance following a FAC call to request their help in identifying some vehicles that he had spotted.

Although unable to confirm the exact identity of the traffic, the flight soon came across a Taliban road block in the mountains and quickly despatched it. Having already air refuelled several times, the flight was taking fuel for their journey home when AWACS called them and asked them to contact Predator once again. A third building was assigned to them, and each jet rippled two GBU-12s into it. The building, suspected of sheltering Taliban fighters, was directly hit and destroyed.

`Crockett 51/52s” historic flight had seen the jets refuel no fewer than 12 times, each refuelling giving them an additional 60 to 90 minutes of loiter time. The mission had been hugely successful in terms of weapons delivery accuracy and weapons effects accomplished. Although the duration of the sortie was exceptional, ‘Spear’ seemed more impressed that his backside could still hurt a week later!