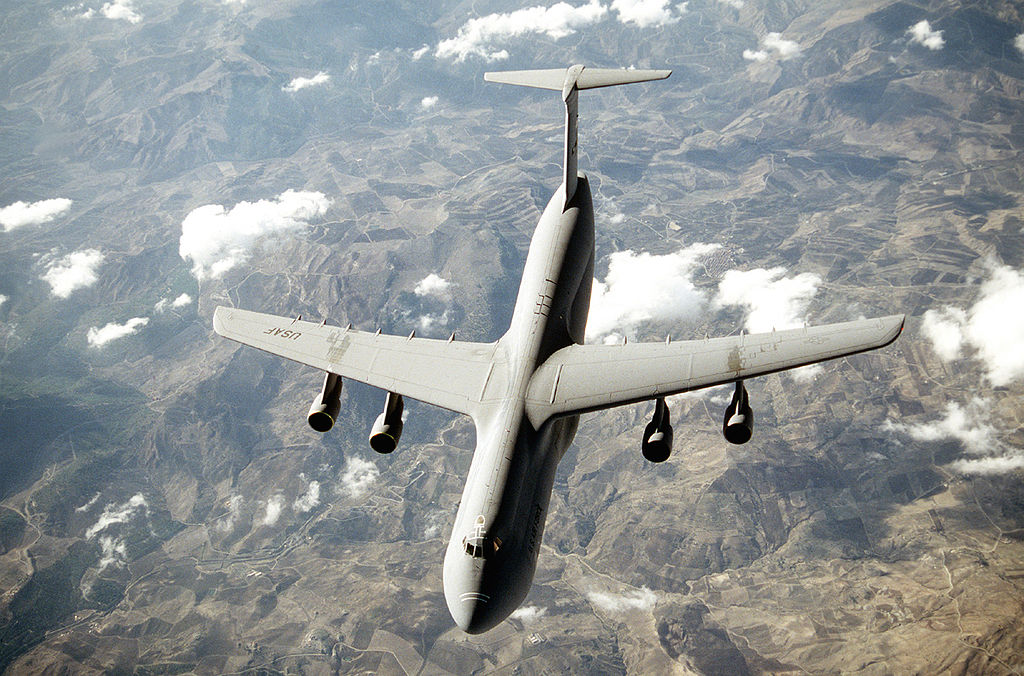 He looked at me wearily and said: “I’m so fucking tired, I don’t care if they violate me…”

At the end of a very long day in the spring of 2004, as we neared Honolulu from the west, approach control cleared us in our C-5 to descent from altitude to 5,000 feet. “Golden Boy,” on his recommend ride for upgrade to aircraft commander, pulled the throttles back about half way and started down. Although we had unlimited visibility at altitude in bright sunshine, we descended toward a scattered deck of small puffy white clouds in the 4-10,000-foot level.

At about 15,000 ft in the descent, our airspeed had climbed to 310 kts. This seemed needlessly close to our maximum airspeed, so I opined mildly to the pilot that he was hot (airspeed too high). He jerked his head toward me, stared at me for a moment, then put his hand on the throttles. He pushed them up to max power briefly, then slowly pulled them back to idle.

I froze. What the hell was that for, I wondered. I’ll find when I debrief him, I thought, but this spiked my apprehension. This maneuver popped a bright red flag into view in my mind.

A few minutes later we passed through 11,000 and still the airspeed was above 300 knots. By regulation we had to slow to 250 knots at 10,000 feet. Approach control expected us to provide a constant descent to 5,000, but our high airspeed would require a level off at 10,000 to slow down. I again told the pilot he was hot, this time with emphasis. He did not respond. We smoked through 10,000 at 300 knots. The pilot gave no hint of levelling off to slow down. At 9,500 feet, I stared directly at him and said emphatically: “You’re hot!”

He looked at me wearily and said: “I’m so fucking tired, I don’t care if they violate me.”

I felt as if my head would explode! I responded, almost shouting, “They aren’t going to violate you, they are going to violate me!” (I had signed for the plane, he performed as aircraft commander.)

“OK, you want me to slow down?” he said. Without awaiting a response, he smoothly, but firmly applied full left rudder to the aircraft, “slipping” the plane and skidding it sideways. This slowed it down in the worst manner possible. I could hear objects flying around in the crew compartment. Although everyone should have been seated in the troop compartment, the effect there would be even more pronounced than up front.

I had hired this pilot, mentored him, and protected him when others at the upgrade meetings expressed doubts about him. He was my golden boy. He had taken every accolade in his pilot training class – best everything: flying, academics, leadership, everything. He knew the airplane exceptionally well and flew very well. Yet, still, rumors about him persisted. I finally told the training committee that I would give him his recommend ride myself to end all this nay-saying about him.

Now I sat, stunned and apoplectic. Dr. Jekyll had turned into Mr. Hyde before my eyes. If he pulled this side-slip stunt on me, his mentor and stan/eval chief, what might he do with a rookie copilot who would not challenge him? I should have taken control of the aircraft and ordered him out of the seat. But, we were on vectors to final and a seat swap would be disruptive. I decided to let him continue under close watch.

Honolulu approach control turned us to a northerly heading placing the airport 15 miles off our right wing.

Approach asked if we had the field in sight. I looked to my right and saw puffy clouds obscured everything beyond about five miles. Just as my finger got to the radio toggle on my yoke to respond, I heard the pilot transmit to approach, “Yeah, got it in sight.”

I jerked my head around and demanded to know what the hell he was talking about. He looked straight ahead, north, and said: “Yes, there it is, at twelve-O’clock,” I looked in that direction and shuddered.

“That is Barber’s Point, not Honolulu! Are you going to land at the wrong airport?” I then told approach we did not have the field and to give us vectors. Approach asked if we had the JAL-747 at our twelve, five miles.” JAL had just come out of the clouds five miles in front of us flying perpendicular to us and heading toward the airport. I told approach I had him in sight. The controller directed us to follow him visually to Runway 04 Right, the shortest runway on the field. (JAL took Runway 04 Left).

The rest of the approach seemed to be going well until short final. The pilot was again “hot” by about 15 knots and I told him so. He began to correct but came over the threshold high and hot. This resulted in a long landing on a relatively short runway, just what you don’t want to see. He touched down, yanked the engines into reverse and slammed on the brakes. The airframe shuddered from the max reverse thrust and the wheels grabbed, released, and re-grabbed as anti-skid system worked its magic. We stopped near the end of the runway in a thin cloud of dust kicked up by the reversers.

So much for that upgrade recommend! When we returned to Dover I sought out the squadron reserve (as opposed to ART) chief pilot, Ryan Payus. I asked him to describe his previous experience with Golden Boy. He described similar outlandish statements and actions. I related my just completed experience. We were both shaking our heads in disbelief. We had both thought we might have caught him on a bad day, but this obviously was not the case. How could a pilot so good on so many levels, go so bad? We discussed the issue with another reserve evaluator, Terry Cave, who had seen the same from Golden Boy. Among us we reached a consensus, Golden Boy must never be upgraded. We all wrote letters to the squadron commander stating our conclusions and providing our reasoning. Mine centered on the spectacle of his going rogue on a senior evaluator. This portended real trouble if he were on the line as an aircraft commander without supervision.

Shortly thereafter I retired from the Air Force and moved to Mississippi to teach Air Force pilot training simulators. After my departure, reportedly, the squadron commander told the training committee that while he appreciated his senior evaluators warning him against upgrading this pilot, he wanted to upgrade him anyway. He said he accepted responsibility and “would take the hit if Golden Boy screws up.”

Two years later, a Dover C-5 crashed into a muddy field a mile short of Runway 32 at Dover AFB. The “rest of the story” covering this event to follow, but two significant factors appeared from the events described above.

Golden Boy was the pilot-in-command of the plane, and the squadron commander, who promised to “take the hit” if Golden Boy screwed up, was in the jump seat.

Months after the crash, an investigator from the accident board interviewed me. He asked me about my experience with Golden Boy. I told him to review the letters that I and the other evaluators had written to the squadron commander, that these should have given him a clear picture of our views.

The investigator looked up, startled, and said “There are no such letters in the pilot’s training folder.”

I’m not sure what happened to the letters. They may have been yanked after the crash, or they might have been returned to Golden Boy after he upgraded. I just don’t know.

Listening to the audio transcripts of the cockpit voices of the crash, I was stunned to hear clear evidence of a personality quirk I recalled hearing in Golden Boy’s hiring interview in 2001. This quirk, in my view, would prove to be the crucial error in the 2006 crash.

I made several errors in this process that deeply chagrin me. I offer these as an example for others to profit from.

There is so much to learn from this saga.