Log In Sign Up
Homepage Cold War EraThe story of how the A-7’s ability to dissipate energy prevented US Navy MiG Killer Mark Fox from crashing his Corsair II during a high speed, low altitude sortie through Star Wars Canyon in Oman 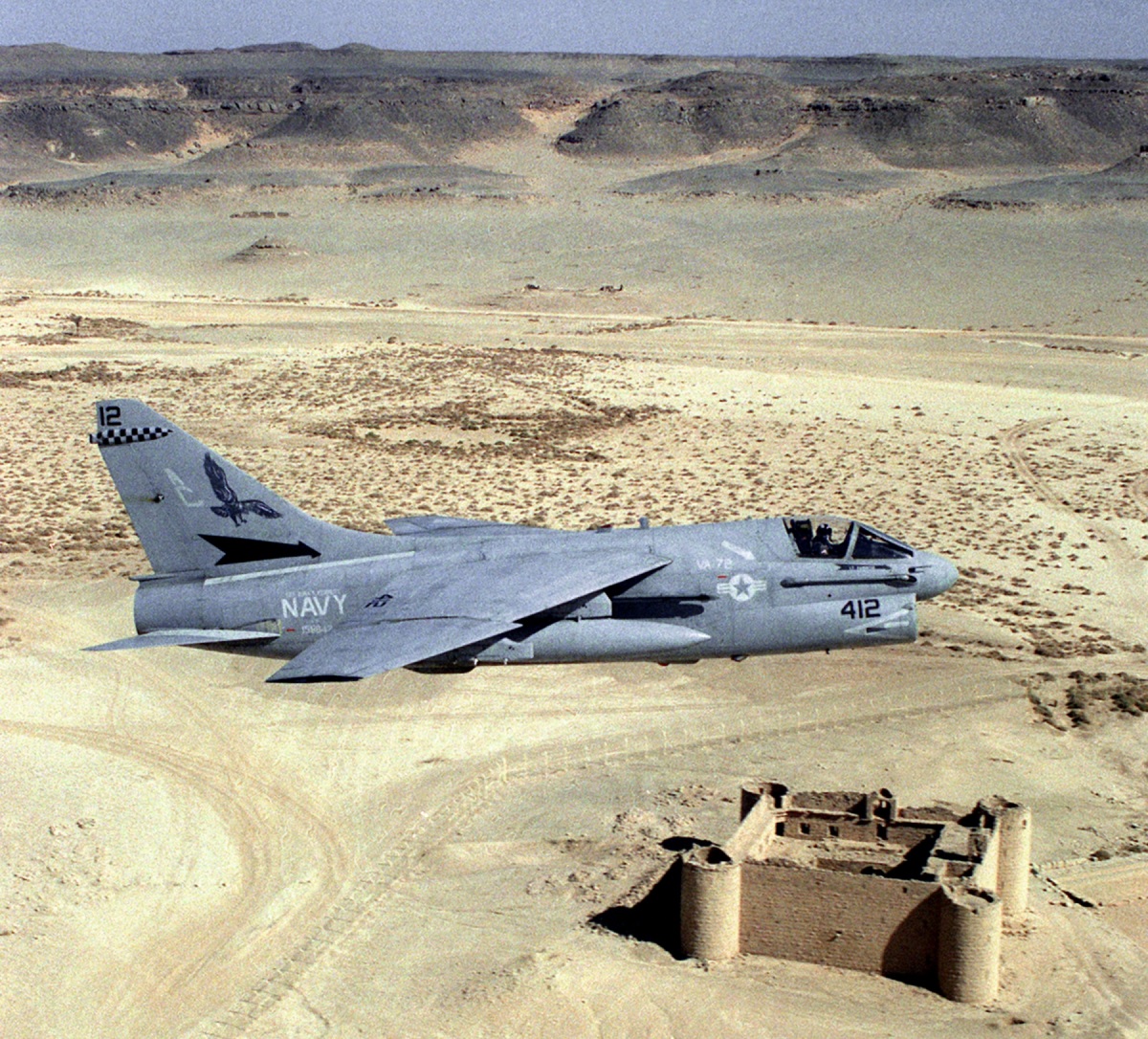 The story of how the A-7’s ability to dissipate energy prevented US Navy MiG Killer Mark Fox from crashing his Corsair II during a high speed, low altitude sortie through Star Wars Canyon in Oman

For Lt Mark Fox in his VA-72 A-7E Corsair II, the challenge of flying high speed at low altitude – hundreds of feet below the rim of ‘Star Wars Canyon’ in Oman – was as great a prospect as anyone could hope for.

For a young Naval Aviator, nothing is as wonderful as flying his fleet aircraft in a challenging environment, testing both himself and his mount to the edge of their capabilities. For Lt Mark I Fox in his VA-72 A-7E Corsair II, the challenge of flying high speed at low altitude – hundreds of feet below the rim of ‘Star Wars Canyon’ in Oman – was as great a prospect as anyone could hope for.

As explained by Peter Mersky with Mike Crutch and Tony Holmes in their book A-7 Corsair II Units 1975-91, in April 1983, Mark ‘MRT’ Fox was an experienced, second cruise lieutenant with 1000 hours in his log book, 800 of them in the Corsair II. Launching from USS America (CV 66), the 1978 Annapolis graduate from Abilene, Texas, was at the top of his game. Over the previous six weeks, he and his air wing (CVW 1) had been flying in a series of bilateral US–Omani military exercises called Beacon Flash, and operating over Oman’s varied terrain had become very familiar. Facing experienced former RAF pilots of the Sultan of Oman’s Air Force (SOAF) flying British built Jaguar S(O)s in these exercises was both challenging and rewarding.

In particular, Oman’s topography varied from absolutely flat desert to extremely rugged and mountainous terrain. One river formed a canyon that resembled a shorter and smaller version of the Grand Canyon, with its rim more than 1000 ft above the dried riverbed below. When they initially flew through the canyon, the air wing’s aviators took a conservative ‘stay at the canyon rim’ approach that only required mild manoeuvring. As time passed, experience and familiarity with the canyon grew, resulting in more aggressive flying at lower altitudes. A ‘one way’ flow to the sea rule was also established to eliminate potential mid air collisions. The air wing dubbed it ‘Star Wars Canyon’, and flying through it was just pure fun. Midway through the canyon, the riverbed made a right 90 degree turn followed by a left 90 degree turn, with essentially vertical granite walls in the lower parts of the serpentine twist. A ‘camelback’ rock formation on the right provided a way to avoid the narrow lower riverbed ‘S bend’ turn.

After much study, and many flights through the canyon (over the ‘camelback’ cut through), Fox realised there was enough room for an A-7 to negotiate the twisting path, and he finally – and carefully – flew his jet through the ‘S bend’ in the lower part of the riverbed. It demanded thoughtful preparation and total concentration, but it was exhilarating. On this particular day, the mission was by now old hat: launch from the ship, go ‘feet dry’ (ingress) into central Oman, fly a low level navigation route over the flat desert, drop practice bombs in a pop up attack on a SOAF target and, still flying at low altitude, go ‘feet wet’ (egress) via ‘Star Wars Canyon’ and return to the ship.

The mission was executed exactly according to the brief. As ‘Dash 3’ in a three aircraft formation, Fox put his practice bombs directly on target and then dropped back into single file to fly through the canyon prior to going ‘feet wet’. Carefully avoiding the jet wash of the two Corsair IIs ahead of him, Fox unconsciously accelerated as he descended on his approach to the canyon ‘S bend’. The challenge of threading his jet between those granite walls beckoned, but he was confident he could make it through – he had done it 24 hours earlier at 350 knots, although now he was heading for the ‘S bend’ at about 450 knots.

As soon as he committed to flying through the lower canyon he realised that things were not the same as yesterday. ‘Oh man’, he thought to himself, ‘I’m going more than 100 knots faster’. He felt a ‘shot of cold ammonia’ hit his heart. The turn radius at this speed was too great for him to negotiate the upcoming 90 degree turn. He could not slow down, and there was no way to escape what was coming. ‘I’m dead!’ he thought. However, Fox was a highly capable young Naval Aviator (as his later career would prove). He made what he called a ‘knife edge’ turn along the ‘grey brown granite wall’, pulling g, with his A-7 shuddering and his muscles tensed.

Then, suddenly, the first wall flashed under his nose and he reversed his turn into a left 90 degree angle of bank to avoid the second canyon wall, again pulling hard to stay in the riverbed. Manoeuvring hard into the two Reno racing style ‘knife edge’ turns had slowed the Corsair II down sufficiently enough to negotiate the ‘S bend’ canyon. Safely through the latter, Fox started a climb out of the canyon. It was at this point he was stunned to see his knees uncontrollably shaking as his A-7 gained precious altitude.

Subsequently rejoining his flight over the water as they headed back to the ship, it would take Fox some time to regain his composure as he flew in the direction of his carrier. For the remainder of his flight he recalled his near death experience over and over again in his head, pondering how close he had come to killing himself in a perfectly good A-7E. Among other things, Fox’s string of eight OK graded three wire landings ended with a fair one wire. Nevertheless, he was glad to have returned in one piece, along with his trusty Corsair II.

Fox later described the incident in an article for Approach (the Naval Aviation Safety Review), ending his submission with the line ‘I have only the A-7’s magnificent ability to dissipate energy to thank for my life (and a benevolent God, who looks out for fools and Naval Aviators)’.

Lt Fox had a stellar career that saw him fly many combat missions in the Middle East, shoot down an Iraqi MiG-21 during Operation Desert Storm and undertake service in a wide variety of leadership roles that culminated in him attaining the rank of Vice Admiral. Among his military awards are the Silver Star, the Defense Distinguished Service Medal, the Navy Distinguished Service Medal with gold star (indicating two awards), Legion of Merit with two gold stars, and the Distinguished Flying Cross with Combat V.

A-7 Corsair II Units 1975-91 is published by Osprey Publishing and is available to order here. 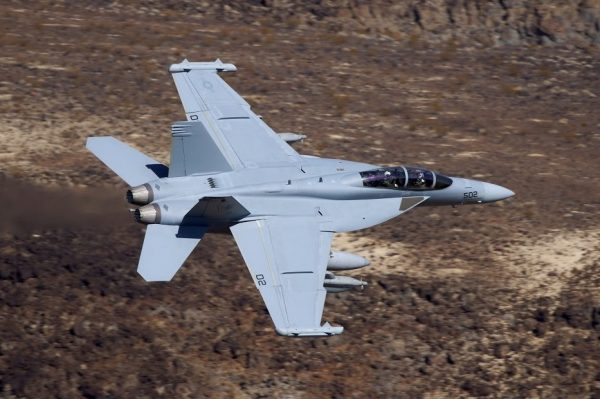 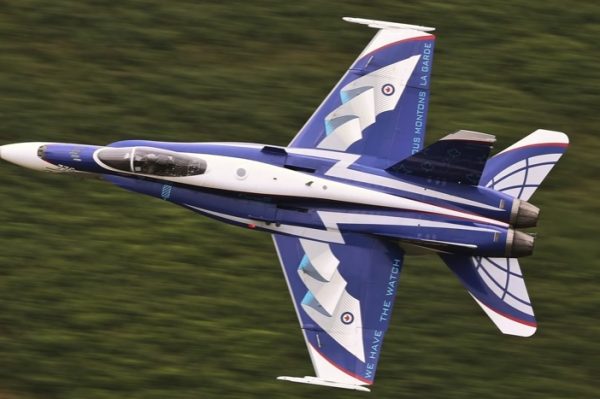