Log In Sign Up
Homepage Cold War EraThe Starfighter’s Worst Day: The Story of two USAF F-104 pilots involved in Iron Hand escort missions that were Shot Down on the Same Day by North Vietnamese SAMs 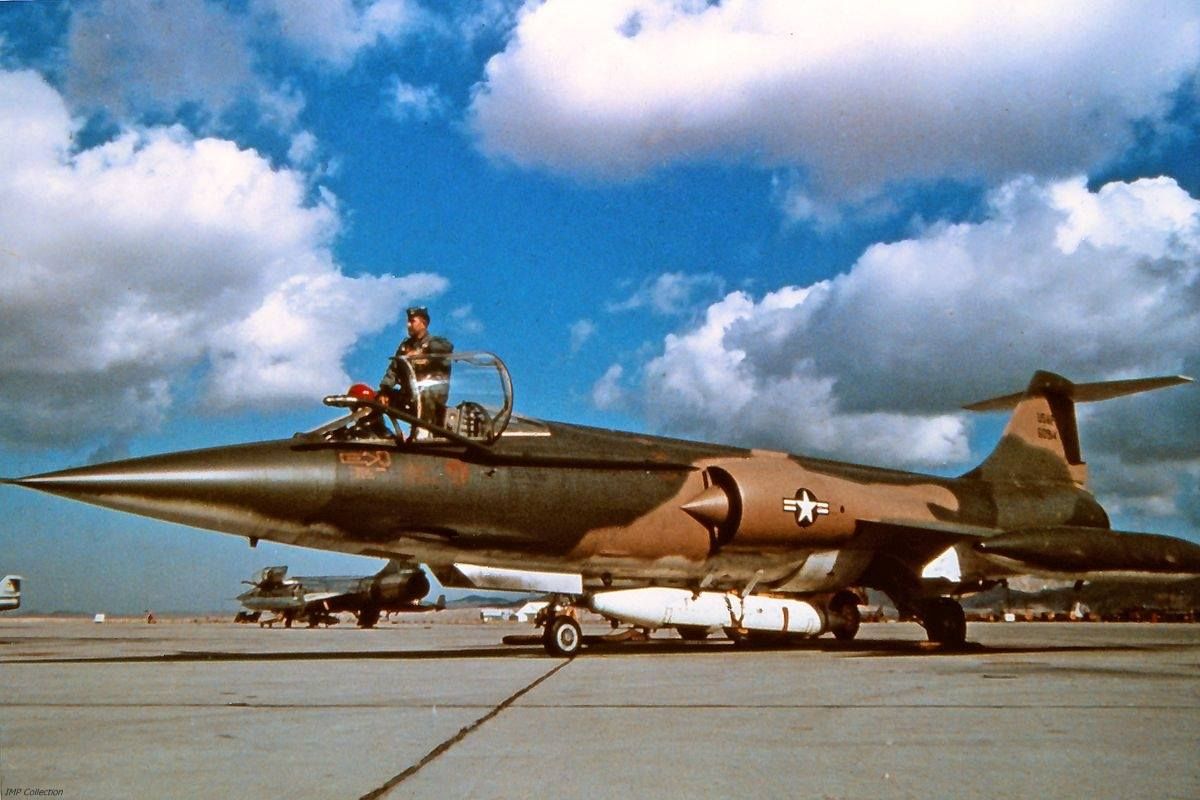 The Starfighter’s Worst Day: The Story of two USAF F-104 pilots involved in Iron Hand escort missions that were Shot Down on the Same Day by North Vietnamese SAMs

On Aug. 1, 1966, that the Starfighter saw some of its worst losses in the Vietnam War, with a pair of 435th Fighter Squadron F-104Cs being lost to North Vietnamese Surface to Air Missiles on that fateful day.

The USAF’s Vietnam Air War is best known on the fixed wing side for the endless sorties flown by Air Force F-105s and F-4 Phantoms. During Operation Rolling Thunder, another type operated there, but one whose service over Vietnam was virtually forgotten. Operating an “orphan” airplane type, the pilots who flew the F-104 Starfighter in Vietnam performed a variety of missions, yet their operations were vastly overshadowed by the Air Force’s more numerous Thuds and Phantoms.

The Starfighter itself had a rather checkered record in USAF service. First deployed to Taiwan as a potent deterrent against China during the 1958 Quemoy and Matsu incident, the Starfighter’s performance was likely a factor in the war not expanding to Taiwan itself. Operated by Air Defense Command as a high-speed interceptor, the aircraft’s incompatibility with ADC’s SAGE Network caused it to be sent to Air National Guard service before the Guard’s 1961 Berlin Crisis Callup resulted in the Guard Starfighter force being deployed to Europe and once again absorbed by the Active-Duty Air Force. The Starfighter was deployed to Key West during the 1962 Cuban Missile Crisis and would have played an important role in any air conflict there. Furthermore, Tactical Air Command operated an improved version capable of Aerial Refueling, the F-104C, and it was that aircraft which saw the swan song of the Starfighter’s service in the Active-Duty Air Force.

The F-104C deployed to Vietnam in 1965, initially operating from Da Nang. The primary mission of the type was “Big Eye” Escort, for EC-121 Constellation Airborne Early Warning aircraft operating off the Coast of North Vietnam. The Connie community had discovered a unique trick to expand their radar range during the Cuban Missile Crisis, by flying low over the water they were able to vastly expand their radar range by “bouncing” signals off the water, thus seeing further into North Vietnamese airspace than they would have had they flown at altitude. Starfighters regularly escorted these machines, as they had to operate relatively close to the North Vietnamese Coast during such missions.

Starfighters were also used in ground attack missions, though their limited payload resulted in the type being far from ideal as a close air support type. As a fighter, the Starfighter was seen as the potent performer it was, though the USAF rarely used its under fuselage Sidewinder Launch rails, preferring instead to fly with either wingtip Sidewinders and Wing Tanks, or clean with tip tanks while relying on the type’s 20 mm Vulcan cannon as their primary armament.

As the type began its drawdown, yet another mission was added to the Starfighter ‘s mission set, Iron Hand Escort. As a high-performance aircraft, the Starfighter was well suited to keep up with F-105F Wild Weasels, and the type began operations in this role in the latter half of 1966. It was on just such a mission on Aug. 1, 1966, that the type saw some of its worst losses in the Vietnam War, with a pair of 435th Fighter Squadron F-104Cs being lost to North Vietnamese Surface to Air Missiles on that fateful day.

The first to be lost was flown by Captain John Charles Kwortnik, during an Iron Hand escort mission in support of a strike against the Thai Nguyen Steel Works. The following accounts are taken from the book Vietnam Air Losses, which is a compendium of US Fixed wing aircraft losses throughout that long conflict.

A flight of four Starfighters were orbiting near a SAM site, 30 miles northwest of Thai Nguyen at 4000 feet as an iron hand flight made an attack. A SAM was launched at the aircraft and Capt. Kwortnik’s aircraft was seen to be hit by the missile. The aircraft immediately burst into flames and broke up. It was reported that a parachute had been seen but intense ground fire precluded any further investigation. If Capt Kwortnik did eject safely than he did not survive as he never appeared in the North Vietnamese POW system although a Hanoi newspaper is said to have reported the capture of a pilot on this date. (Vietnam Air Losses, p69.)

I received the following comment and photo from USAF Veteran Pilot Ed Skowron.

‘One of those 104’s may have been Kwortnik’s bird. I was in the pop at the steel mill and saw a 104, I imagine it was him right in front of me. All I saw was his boom and tips outside of the blast. Ron Johnson was in the Iron Hand flight he was escorting.

‘I reported that I doubted he survived.’

When the Wild Weasels and their Starfighter escorts were about 10 miles southwest of the city one of the Starfighters suddenly turned into a ball of flame. The aircraft was assumed to have been yet another SA-2 SAM victim, and like Capt. Kowrtnik earlier in the day, Lt. Col Finney was posted missing, later changed to killed in Action. (Vietnam Air Losses, P69.)

Kwortnik was relatively inexperienced in type, he was previously a Lockheed C-140 Jetstar pilot. Finney was more experienced as a fighter pilot, having flown 100 missions in an F-86 Sabre during the Korean War. Both were relative newcomers to the Starfighter Community. The Starfighter certainly demanded the best from its fliers, and yet the Bureaucratic Nature of the Air Force at the time resulted in the unique situation of Lockheed C-130 fliers being transitioned to the Starfighter and sent into combat over Vietnam the day after their arrival there.

‘My memory of Col Finney. When we were leaving George AFB…the planes and a select group of pilots had to fly them over to Thailand. The rest of us were to go in C-141’s and some of us went early but the majority of us went after the F-104’s departed. I can still see Colonel Finney’s son…probably around 6 or 7 years old…saluting his dad before his dad left…to never return! The son had a little uniform complete with flight cap and that picture… along with that of “John John” saluting good-bye to JFK will forever be engraved in my mind!’

Both Kwortnik and Finney are memorialized at the National Military Cemetery of the Pacific, a place I know well as my Grandfather Col. William Ballenger Cobb rests there as well. Both remained Missing in Action until officially reclassified by KIA in 1985.

For men such as these, who fell in War and took nearly two decades to finally “come home” we hope this post may do some small bit to honor their memories to their families. 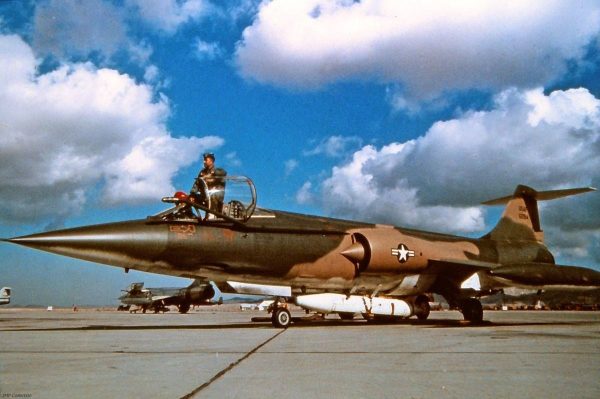 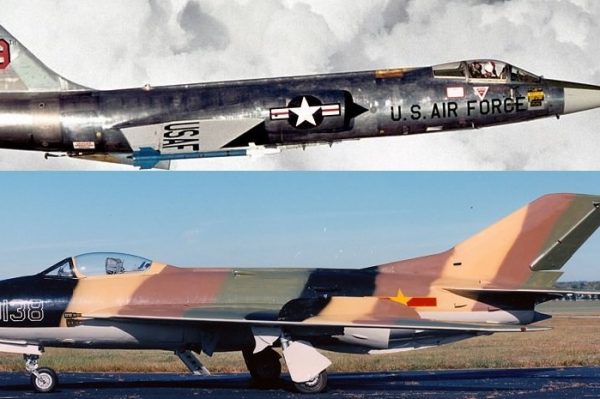 F-104C Vs MiG-19: the story of the only air-to-air shoot-down of a Starfighter during the Vietnam War