The saga of Israel’s MiG-29 Fulcrums

Unlike the other frontline fighters of the past, the Israelis seemed unable to obtain a MiG-29 through clandestine measures. But, with the end of the Cold War, a means of evaluating the jet became possible – simply rent one. This they did.

The Israeli Air Force (IAF) was keen to get a first-hand look at the systems and performance of the MiG-29 Fulcrum once it began to appear on Syrian soil.

It has been reported that Israel obtained a nearly complete, crated, MiG-29 via a covert deal with a Polish general. The aircraft was at Gdansk awaiting shipment to Syria, but was instead put on a plane and flown to Israel in late 1985. The Soviets soon got wind of this and demanded its return. Because the Israelis were then attempting to foster good relations with the Soviet Union, they complied in about February 1986. The aircraft parts had been examined and photographed, but it is doubtful that anything more had been accomplished during the episode.

As explained by Bill Norton in his book Air War On The Edge: A History of the Israel Air Force and its aircraft since 1947, during 1991, Israel borrowed a MiG-29 radar from Germany in a deal that involved a considerable number of Soviet weapons sold or loaned to the Israelis. These included up-to-date T-72 main battle tanks (MBTs) shipped to Israel, but listed on officially falsified shipping documents as ‘agricultural equipment’. The radar came from one of the former East German MiG-29s that had recently become accessible to the West via the re-unification of Germany. After a thorough technical evaluation, the unit was returned to its owner.

While useful, the radar evaluation alone did not provide a fraction of the answers the IAF sought: only the full-up jet would suffice.

Unlike the other frontline fighters of the past, the Israelis seemed unable to obtain an example through clandestine measures. But, with the end of the Cold War, a means of evaluating the jet became possible – simply rent one. This they did. Israeli pilots flew the jet in one or more East European countries, and possibly Germany, in the first half of the 1990s. However, a detailed evaluation would require mock combat against the IAF’s frontline fighters.

The loan of three MiG-29s from an undisclosed East European nation (possibly Poland) was arranged in 1996 or ’97. The aircraft, reportedly including 35105, appeared to have been early A models. Flown from a number of Negev air bases – probably including Ramon – the MiG-29s were wrung out during a two-week trials session during April 1997. Each jet was reportedly flown 20 times. Mock fights against the F-15 and F-16 were run plus technical evaluation of the helmet-mounted sight and infrared search-and-track systems. The Israelis were reportedly impressed with these features and the aircraft as a whole.

“MiG’s abilities equals and sometimes even exceeds those of the F-15 and F-16 jets”, said Major N, one of the IAF pilots who flew the MiG-29. “The aircraft is highly manoeuvrable, and its engines provide higher weight to thrust ratio. Our pilots must be careful with this aircraft in air combat. Flown by a well trained professional, it is a worthy opponent.”

Major N was echoed by Lieut. Gen. M: “flying the MIG was one of a kind type of experience for a test pilot. Now I know that the result of an air combat between the MIG and an Israeli fighter jet depends on how the combat develops. In a tight battle, it is a real threat. It’s an advanced aircraft, and in close manoeuvring engagements it is absolutely terrific. It makes sharp turns, it’s quick, and to my opinion, as a platform, it does not fall short of our advanced fighter jets.”

The evaluation was a costly affair, but provided the valuable data on threat aircraft previously acquired only through captured examples.

All markings identifying the true owners of the MiGs were painted over. Curiously, Israeli national markings were not applied to the jets, probably as a condition of the contract. The markings of the F-16 253 Squadron (where the MiG-29s may have been hosted) and the Flight Test Center [# 104 and 110, respectively] were affixed to the tails of the aircraft. 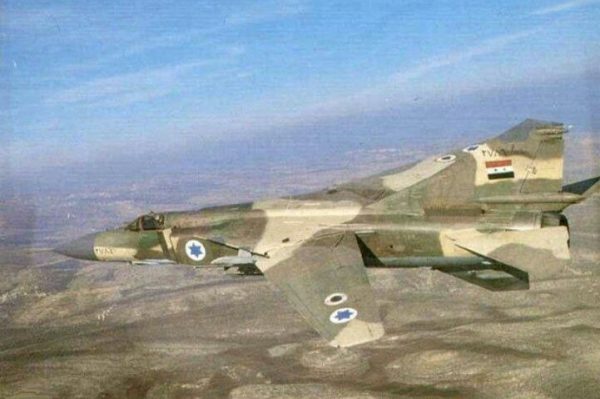