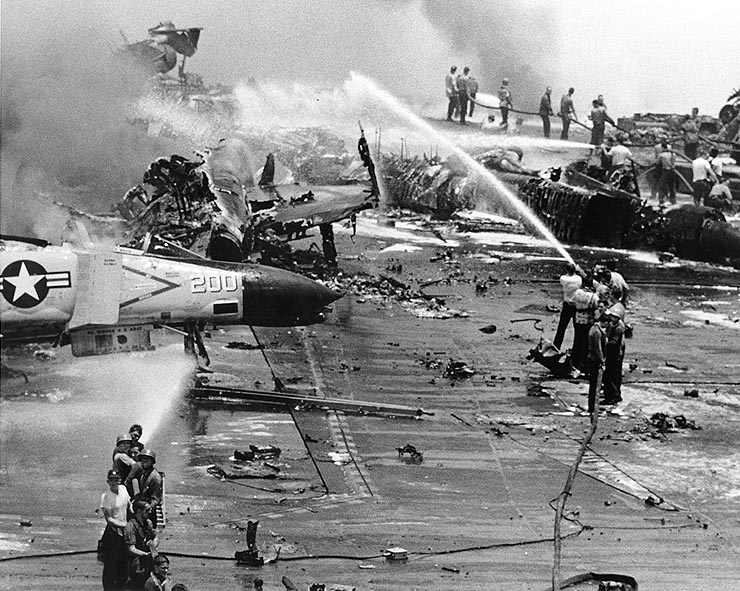 As the F-4B’s own electrical systems took over, causing a power surge, there was a tremor beneath the left wing and a single Zuni flashed across the Forrestal deck and severed an ordnance-man’s arm…

Fires on overcrowded aircraft carriers are every crew’s nightmare. Several of these accidents took place during the Vietnam War. The first to hit TF 77 was started in a magnesium flare locker aboard Oriskany (CV-34) in October 1966, killing 25 pilots and 19 sailors and taking the carrier out of the war for nine months. Of all the lethal ordnance aboard carriers, the Zuni rocket was involved in the most disastrous onboard fires. One of these occurred aboard Coral Sea (CV-43) on Oct. 18, 1967 when nine sailors were burned after a Zuni ignited during a test on deck. Crewmen near an F-8 Crusader onboard Hancock (CV-19) had also been badly burned when a Zuni misfired earlier that same year.

However, nothing compared with the fire onboard Forrestal (CV-59) that almost destroyed the ship on Jul. 29, 1967 — only its fifth day on the line in the Gulf of Tonkin. As explained by Peter E. Davies in his book US Navy F-4 Phantom II Units of the Vietnam War 1964-68, VF-11 F-4B BuNo 153061 AA 110 was one of three loaded with six LAU-10/A Zuni pods on TERs rather than the 2.75-in rockets that the pilots had expected. The aircraft had flown an 0700 hrs mission earlier that day and returned with a hung Mk 82 bomb, so loading LAU-10/As was seen as a time-saver in order to meet the aeroplane’s 1100 hrs launch deadline.

Another short cut unofficially employed by Forrestal’s deck crew was to attach the ‘pigtail’ electrical connection between the TER and the rocket launcher receptacle while aircraft were still ‘spotted’ in their pre-taxi positions on deck. The official instruction was that this last-minute connection should be plugged in ‘just before takeoff’, which most assumed to imply ‘on the catapult’ in order to prevent the possibility of inadvertent rocket launching at other aircraft on deck rather than out to sea. The system’s other safety back-up was a ‘TER pin’ that was placed in a receptacle on the rocket-firing intervalometer mechanism, blocking the current from reaching the Zuni and firing it off. TER pins were supposed to remain in place until seconds before launch, but to save further time in the frantic launch schedule of an Alpha package these pins were being removed earlier while the aircraft were still being pre-flighted. Sadly, deck crewmen were apparently unaware that both these safety measures, each one supervised by different personnel, were being overridden together. They also had little experience of a TER electrical system, which included a switch that was vulnerable to electrical surges.

Lt Cdr James E Bangert, pilot of F-4B BuNo 153061 and squadron safety officer, was unaware of the two conflicting shortcuts, although he had been disquieted to learn that weapons were being armed early to hasten the launch sequences. As he pre-flighted his F-4B a crewman checked all the armament circuits and found no stray voltages, so he plugged in the Zunis’ pigtails. Bangert fired up his starboard J79 and signalled to crewmen to disconnect the yellow external power cart used to provide power for the start procedure in the absence of an internal battery. As the F-4B’s own electrical systems took over, causing a power surge, there was a tremor beneath the left wing and a single Zuni flashed across the deck and severed an ordnance-man’s arm. It then impacted the external fuel tank of an A-4E Skyhawk (Lt Cdr Fred White’s AA 405 of VA-46) in the row opposite to the line of F-4Bs. Although it did not explode, the rocket cut into the fuel tank, spraying fuel all over the flightdeck. The A-4E, and those of Lt Cdr John McCain and Lt(jg) David Dollarhide, were instantly engulfed in flames as the fuel was ignited by jet engine exhausts.

There was a possibility that the burgeoning fire could have been contained by Forrestal’s vigilant fire crews, but far worse destruction was to follow as two 1000-lb M65 bombs fell from the wing pylons of the A-4Es. The shortage of new, low-drag Mk 83 bombs at the time had forced the ship’s commanding officer, Capt John Beling, to accept a delivery of 16 World War 2-vintage M65s from Subic Bay, where they had been subjected to open-air storage in jungle conditions. His initial reaction had been to refuse the bombs, and many of the ship’s ordnance men also threatened to boycott the corroded weapons, some of which had been stored since 1953. They were known to be much more heat-sensitive than Mk-series ordnance and susceptible to shock detonation, while their explosive power was actually increased by chemical degeneration during storage.

The suspect bombs were uploaded for the day’s strike as early as possible, partly to get them off the ship. When the fire began they started to detonate within 1.5 minutes, rather than allowing a ten-minute window for the firefighters to tackle the blaze as the thicker-skinned Mk 83s would have done. Massive holes were blown through the carrier’s flightdeck and blazing fuel cascaded into the lower decks. In all, nine bombs cooked off, and when the fire was eventually defeated after 12 hours 134 men had been killed and many more injured. Forrestal’s CVW-1 lost 21 aeroplanes, including seven F-4Bs, and a further 34 aircraft sustained serious damage. CVA-59 returned to the Norfolk Naval Shipyard for an extensive rebuild that cost more then $72m. It was replaced in TF 77 by fellow Atlantic Fleet carrier America. 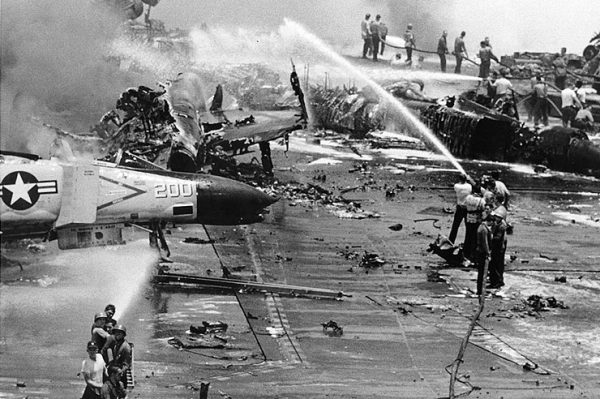 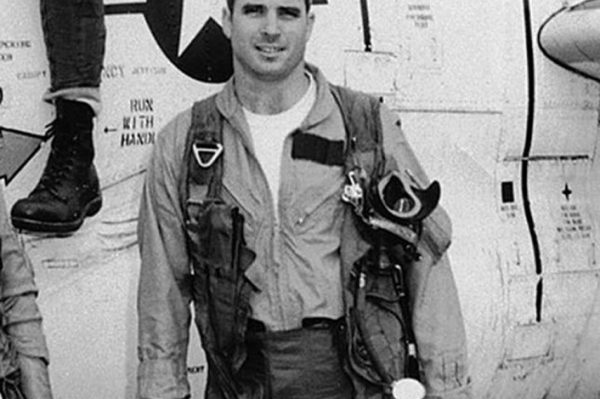