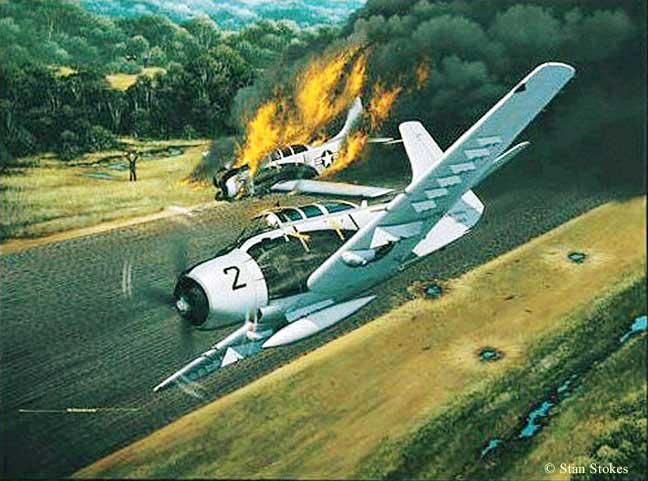 “Myers gave me a couple of hugs and held up a finger, meaning ‘number one,’” Maj. Bernard Fisher, former A-1E Skyraider and Medal of Honor recipient

As explained by Wayne Mutza in his book The A-1 Skyraider in Vietnam, on the morning of Mar. 10, 1966, as “Hobo Five-One,” Fisher took off on a routine bomb-and-strafe mission, with Captain Francisco “Paco” Vazquez, “Hobo Five-Two,” flying another A-1E on his wing. They had been airborne only ten minutes when they were diverted to A Shau. Reaching the cloud-covered area, Fisher found other Skyraiders looking for a hole and, once again, it was he who found it. Two Spads followed Fisher and Vazquez down to the battlefield in trail formation. Two others, Hoboes Two-Seven and Two-Eight, penetrated the overcast soon after and held at a position over an abandoned airfield. Fisher and his wing man roared clown the narrow valley, six miles to the besieged camp. Every pilot who came into A Shau that day had to dive 6,000 feet through the clouds, level off above the trees, and then run the gauntlet to the camp. There was little room to maneuver until they reached the camp, where the valley widened. Knowing that, the enemy had set up about 20 anti-aircraft weapons along the valley’s ridgelines and prepared to carve meat.

Fisher hugged the ground at about 50 feet altitude and raised the camp’s defenders on his FM radio. He said, “I’m the A-1E that just passed over. Where do you want the ordnance?” They answered calmly, “Hit the south wall. They’re coming over the south wall.” Fisher radioed Vazquez, who was on his tail, to set up for strafe. Behind Vazquez was Major Dafford “Jump” Myers, “Surf Four- One,” being followed by his wingman, Captain Hubert King, “Surf Four-Two.” All felt ground fire hitting their aircraft. King was almost through the gauntlet when a burst of automatic weapon fire shattered his windshield, missing him by inches. Unable to see through the glass, he pulled up through the clouds and out of the valley.

Myers had just pulled off his second strafing pass when he felt his Spad lurch. Myers said:

“It was a good solid hit that shook the whole plane and rattled my teeth. I’ve been hit before by the fifty calibers, and this was something a lot bigger, maybe the Chinese 37mm cannon.

“The engine sputtered, and then it conked out for good. The cockpit filled with smoke. I got on the radio and gave my call sign, ‘Surf Four-One,’ and said, ‘I’ve been hit and  hit hard.’ Bernie came right back and said, ‘Rog, you’re on fire and burning clear back to your tail.’ I was way too and said, ‘I’ll have to put her down on the strip.’ I had kept the same angle of bank around the ridgeline after I got hit, and I knew I was coming around toward the north end of the strip. I never saw the runway because of the smoke blowing in my face, but I got a rough fix on my position by looking over my left shoulder and the canopy. From that point on, Bernie talked me down.

“He was very cool about it, and that helped. I held my breath for as long as I could, but then I started eating a lot of smoke. Bernie called, ‘You look pretty good four-one, take her to the left a little, get your gear down and jettison your ordnance.’ I was still carrying 12 frag bombs and two white phosphorous that might go off on impact. I dumped them just short of the runway. Bernie said, ‘That looks good, that looks good,’ but about five seconds later he said, ‘You’re too hot, you’re too hot, get your gear up-you’ll have to belly her in.’”

As Myers touched down the wheels were still coming up and crumpled beneath the Spad. When he dumped his centerline fuel tank had not released and fuel fed an intense fire that immediately swallowed the airplane.

For nearly a minute Fisher saw no sign of life from below.

Right after he impacted the strip Myers opened the left canopy panel, only to be greeted by roaring flames, so he slammed it shut. Luckily the canopy popped open and  a stiff of breeze opened a path through the flames that, to Myers, seemed like the path through the Red Sea.

Certain that the enemy would look for him first at the burning airplane, and concerned that it might explode, Myers crawled to get away from it. He encountered a minefield, so he crawled back:

“I said to myself, ‘Myers, you have really had it now’. The last thought on my mind was rescue. I knew a chopped would never survive to ground fire, and it simply never occurred to me that somebody would be crazy enough to put an A-1E down on that strip.”

“I dropped that last string west of the runway to keep their heads down, and also because I wanted to come into that short strip as light as possible. I had it firmly in my mind that the other guys flying cover would give me all the protection I needed.”

On his final approach Fisher became enveloped in smoke from the camp, and when he was through it realized he was too fast, so he settled onto the strip for just a couple of hundred feet. He saw Myers wave, then gave it power and took off again. Fisher bent it around tight in a teardrop turn and came in from the opposite direction, holding it at 95 knots. He just cleared the trees, raised the flaps, and leaned on the brakes even before the tail came down. Riding the brakes, he steered around jagged holes, hitting rocket pods the A-1E’s stout simply kicked aside.

He chose the runway overrun over slamming on the brakes. He swung the Spad around in the mud and grass, applied power, and taxied back down the runway looking for Myers. Myers waved from the weeds, but when Fisher braked he did not see him running. Thinking Myers was badly hurt, Fisher set the parking brakes, unstrapped, and began to exit the aircraft to go and get him. Bullets were smashing into his airplane, one narrowly missing his head.

Myers, seeing the Spad on the airstrip, assumed another had been shot down. When he realized it was there for him, he said, “Why, that crazy S.O.B. has come in here to get me out.” Amid a hail of gunfire, he ran for the Spad.

Fisher was about to jump out the right side when he glimpsed movement in his rearview mirror. It was Myers scrambling up the wing on his hands and knees. He dove into the cockpit, his legs flailing around Fisher and the instrument panel. Fisher grabbed him by the back of his flight suit and set him right side up. Fisher whipped the tail around, slammed the throttle forward and, again, did his runway dance around obstacles, adding power and using the last foot of the strip to get airborne. An eye witness in the camp said the soldiers holding the fort cheered as Fisher’s Spad roared down the strip and finally lifted off the ground.

Fisher knew his Spad had taken numerous hits, but he and Vazquez headed for home base at Pleiku. He said:

“Jump couldn’t talk to me because he didn’t have a radio headset. He signaled me for a cigarette, and I shook my head, because I don’t smoke. He gave me a couple of hugs and held up a finger, meaning ‘number one.’ He was a mess. He got mud all over everything he touched, and the smoke from his flight suit stunk up the whole cabin. But we couldn’t help turning to each other and laughing all the way home.”

Fisher was awarded the Medal of Honor on Jan. 19, 1967. His A-1E was once again repaired and spruced up, and was placed on display at the U.S. Air Force Museum.