Log In Sign Up
Homepage Cold War EraThe Death Spiral of Swoon 52: the story of the B-52 bomber that crashed into Hunt’s Mesa during a low level training sortie 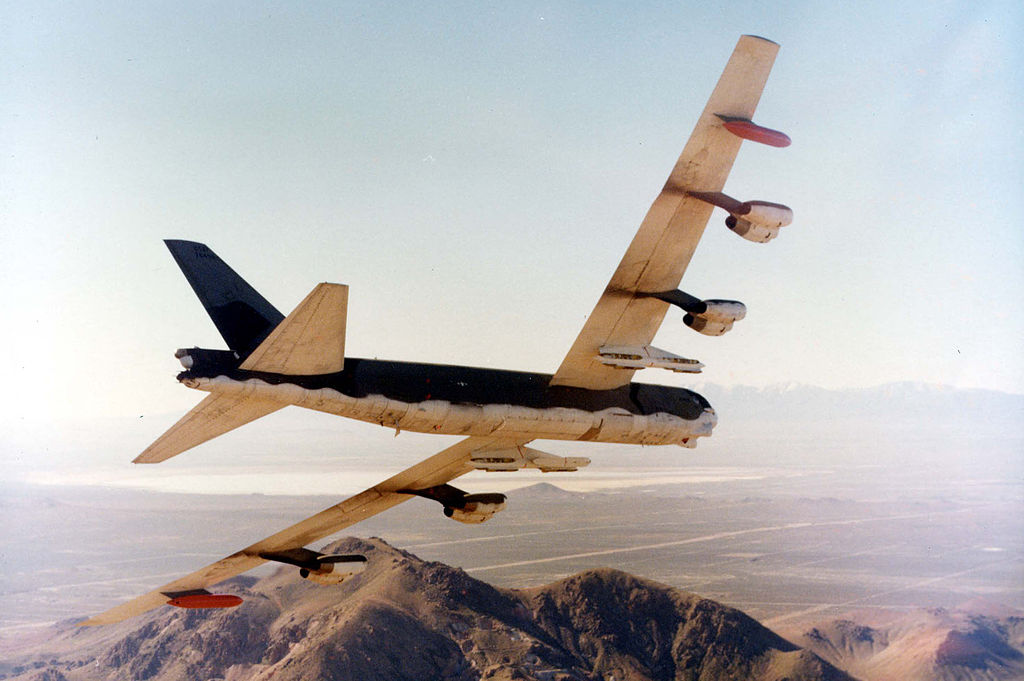 The Death Spiral of Swoon 52: the story of the B-52 bomber that crashed into Hunt’s Mesa during a low level training sortie

“As the plane leveled off, Hunt’s Mesa suddenly appeared above the aircraft on the crew’s radar scopes that displayed the plane’s position well below the mesa rim. The pilot firewalled the engines and started a steep climb to clear the ridge, but the effort proved too late,” Jay Lacklen, former B-52 pilot

The B-52 bomber, call sign Swoon 52, swept over the dark desert landscape in a descent into the Holbrook low-level route that runs through Monument Valley, Arizona. The visibility on this October night in 1984 was acceptable but with light snow falling that made judging distances and terrain elevations more difficult on the plane’s infrared radar scopes.

The plane dropped steeply down to the valley floor to simulate the primary mission to penetrate the Soviet Union and drop nuclear weapons on Russian military targets. Their newly assigned wing operations commander, Col. Bill Ivy, observed the crew and mission from the pilot jump seat. While he wore a parachute, he alone among the crew did not have a ballistic ejection seat should bailout become necessary, a factor that would doom him.

In the final part of the aircraft’s descent, the infrared scopes ineffectively painted only ground returns due to the steep angle at which it approached the terrain. Undetected, the broad, flat rock formation of Hunt’s Mesa lurked a short distance away.

As the plane approached the ridge, Col. Ivy could not have anticipated that he would very shortly realize he was about to die and would have about eight seconds to contemplate his fate.

The crew had concentrated on flying down to their prescribed route altitude five hundred feet above the ground but had done so in the valley leading to the rock formation. As the plane leveled off, Hunt’s Mesa suddenly appeared above the aircraft on the crew’s radar scopes that displayed the plane’s position well below the mesa rim. The pilot firewalled the engines and started a steep climb to clear the ridge, but the effort proved too late. The other crew positions on the aircraft might have had an inkling of danger from the sudden application of full power, but more likely they knew nothing until the right wing tip caught the mesa rim.

I have not had access to the accident investigation report, so I must guess at the final seconds of Swoon 52.

Had an observer been standing on the Hunt’s Mesa ridge line, there would have been little warning that disaster was on the way. The B-52 would have approached at three hundred mph below the level of the mesa. The sound of aircraft engines would arrive only slightly before the aircraft from the snowy darkness below. With only a faint whine as the plane neared, the roar of eight engines would have risen rapidly as the plane climbed desperately to clear the ridge.

Suddenly, the plane would have appeared, engines screaming, in a slight right bank with its right wing angling down. As it crossed the ridge, the right wing tip and outboard engine pod that held engines #7 and #8 would strike the mesa, tearing them from the wing. This would throw the plane into a right corkscrewing death spiral that would end 3,600 feet away and about eight seconds later, where it would strike the top of the rock formation, cartwheel across the mesa, explode and cascade fiery debris into a ravine on the far side of the mesa. A salvage team sent later to recover usable plane parts from the area reported no usable parts remaining, so violently had the aircraft been torn apart in the crash.

Many times in the years since, I have mentally ridden that eight-second aircraft death spiral with Bill Ivy, my fellow Castle B-52 instructor. I heard the accident report early the next morning on TV, which caused me to leap from my couch in Delaware in disbelief.

Immediately after the initial impact concussion tore off the right wing tip and two outboard engines, the aircraft would have accelerated its right turn, since the left wing would now be producing far more lift than the shortened right wing and would have four engines at power instead of the two remaining on the right wing. Because the plane had been on a fairly steep upward trajectory, it would have continued to rise briefly as the spiral began. I estimate the left wing struck the mesa on its second revolution and began the catastrophic cartwheel disintegration.

The pilot would have instinctively applied full left-turn controls with the wing spoilers in an attempt to counter the hard right rotation that had begun. The aircraft would have continued to roll toward ninety degrees of bank despite the pilot’s efforts and, within about two seconds, he would have mentally acknowledged the hopelessness of his task and commenced the ejection sequence.

A reported copilot account said immediately after ridge impact, he first looked at the fireball on the right wing and then turned to see the pilot’s ejection seat traveling up the rails and out of the plane in seeming slow motion. Before ejecting, the copilot reported Col. Ivy had begun a mad scramble to get out of the aircraft.

All six crewmembers with ejection seats escaped the aircraft, and five survived. The gunner bled to death on the mesa, as his leg was severed during ejection. Ivy went down with the aircraft.

The navigators should not have survived since they require four hundred feet ground clearance and level flight to have one swing in their parachute before hitting the ground. However, it appears everyone ejected as the plane neared or passed ninety degrees right bank, allowing the nav team a successful trajectory from the aircraft. The radar navigator received severe facial burns from the aircraft’s initial impact fireball and explosion, so closely before the impact did he eject.

Ivy had no time to pull himself out of a pilot’s overhead hatch opening, considering the instability of a spiraling aircraft, whose centrifugal force would have pressed him against the left wall of the crew compartment and the tornado-force winds beyond the hatch.

If the aircraft had been stable and at altitude, he could have clambered down the ladder to the lower compartment and leapt from a navigator’s hatch more easily than transiting an upper hatch, but there was no time and no altitude.

I imagine Ivy saw vividly what was coming and finally closed his eyes to accept death in serenity.