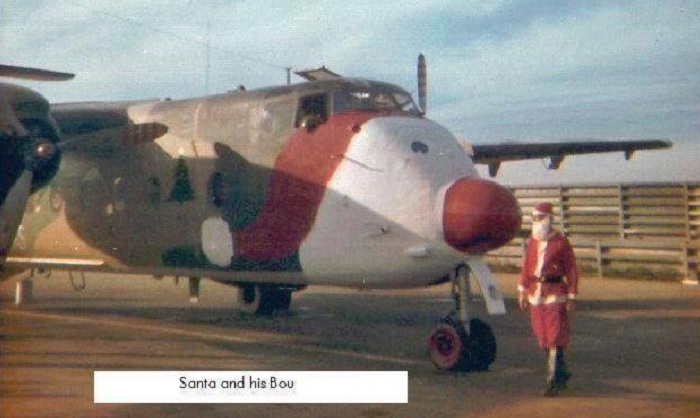 The rear cargo door came down, and Santa emerged. The troops cheered and whistled. Then the Donut Dollies came down the ramp and the troops went joyously berserk, but not in a nasty or lewd sense…

Christmas 1971 provided a mental break from the war. In an annual event, the Cam Ranh air wing painted a C-7 with a red Santa Claus face on the forward dome [which was dubbed C-7 Santa-Bou] and flew to various bases as a treat for the army troops. I participated on this run but only as a back-up crewmember for the primary pilots. I was not called upon to perform, so I got to play Santa’s helper at the various stops.

One of the flight mechanics played Santa dressed in an appropriate red suit and fake beard, and a small, half-dozen strong, squad of “Donut Dollies,” or female Red Cross workers, played Santa’s helpers. We also carried a large stock of liquor and sandwiches for the troops.

I had underestimated the potential poignancy of the event. Bringing the Christmas aura to the trenches of Vietnam unleashed seemingly well-secured emotions that suddenly broke loose in everyone, none more clearly displayed than at the small northern delta army base of Bao Loc, sixty miles northeast of Saigon.

We pulled onto the poorly conditioned parking ramp, but before we could shut down the engines and open the rear cargo door, a series of large transport trucks appeared on the road to the field filled with troops whooping and waving. They pulled up next to us on the ramp and disgorged fifty or so soldiers in their green fatigues that surrounded the rear of the plane to welcome whoever might disembark.

The rear cargo door came down, and Santa emerged. The troops cheered and whistled. Then the Donut Dollies came down the ramp and the troops went joyously berserk, but not in a nasty or lewd sense.They spun around in the same frantic ecstasy of a pet dog when you pick it up from the vet or when you hold its dinner bowl over its head to make it dance. No group of children ever carried off the fantasy so well.

A young soldier shook my hand with tears in his eyes and said, “Sir, this is the best thing that has ever happened here.Thank-you so much!” Maddeningly for my composure, he was about to make me cry, too.

This brought to mind, yet again, the imperative question: “What the hell are we doing here?”

We carried a bag of letters from school kids in the States for the soldiers. They told of how proud they were of the troops, how they hoped they didn’t get hurt, and to come home soon to their families. As I watched the troops reading these simple letters, I did start choking up as they became silent with faces contorted to avoid crying.

As the sun set over the Central Highlands, we flew up the coast past Phan Thiet (Pappa Tango) toward Cam Ranh with the upper cargo door raised and the bottom ramp angled up so we could lie against it and look out the back of the plane. Two or three Dollies joined megazing out at the South China Sea in wistful contemplation of the day, marveling that in our mid-twenties we found ourselves in such a perplexing situation halfway around the world.”