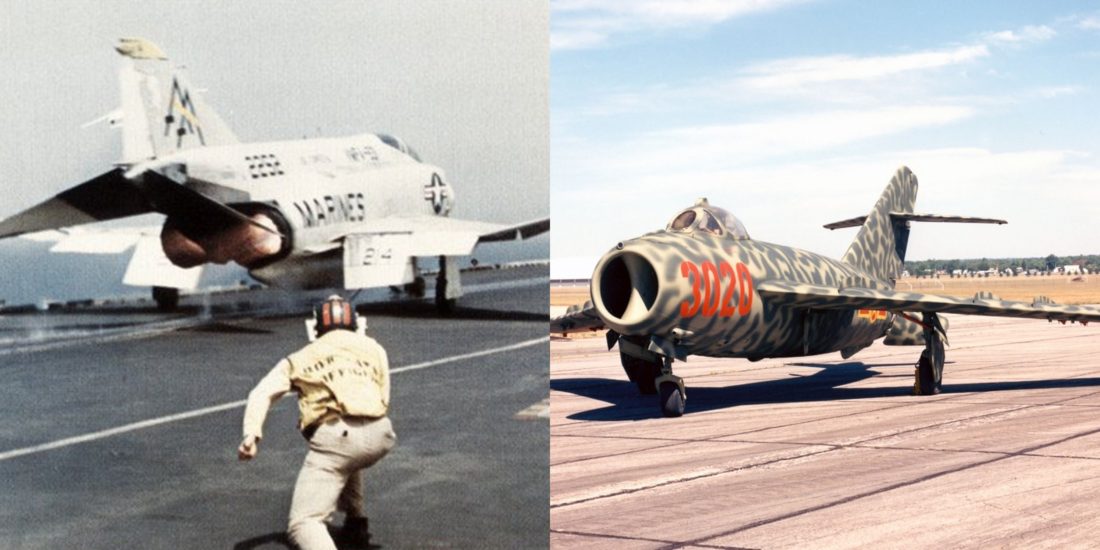 “The two MiG-17s went into a 60 degree port turn. I immediately thought they saw us and I slid to the outside of their turn, re-confirmed I was ‘in Sidewinder’ and periodically, when at the bogies’ six o’clock, I would hear that beautiful `Grrrrrr’ Sidewinder tone,” MGen Mike “Lancer” Sullivan, high-time Naval F-4 aviator

As explained by Peter E. Davies in his book Gray Ghosts, U.S. Navy and Marine Corps F-4 Phantoms, in 1963 U.S. Navy and U.S. Marine Corps (USMC) F-4Bs deployed to Key West in response to the Cuban Crisis and to Washington’s desire to have the most advanced interceptors in place to counter the threat of Russian and Cuban aircraft. VF-41 had previously occupied this slot, and VF-102 on USS Enterprise helped to maintain the blockade of Cuba. VF-41’s move to the base, according to Phantom former RIO Fred Staudenmayer, “had been initiated by one of SecDef MacNamara’s whiz kids without going through the usual Navy chain of command, a harbinger of the micro-management that was to follow. With the most sophisticated and effective airborne weapons systems available we assumed Alert status under the operational control of the Air Force to intercept anything coming up from the South. The MiGs never did, except to defect, but we did intercept an interesting assortment of Piper Cubs, transports, balloons, and boats.”‘ However, the Navy Phantoms‘ superiority over its USAF counterparts was not something the Air Force seemed to want to publicize at that time: “During a ‘keep up the good work’ visit just after the maximum crisis time President Kennedy toured the squadron lines of airplanes that had not been flying and bypassed us!”

By the time the Gray Ghosts arrived the threat had diminished, but there was still some action against Cuban MiG-17s which provided Phantom crews with some valuable early experience of a future adversary. MGen Mike “Lancer” Sullivan, who became the high-time Naval F-4 aviator with 5,000 hours on Marine Phantoms in a 23-year career on the type, experienced one such encounter while he was assigned to VMF(AW)-531:

“C.C. Taylor, my RIO, and I launched on an airborne scramble, vectored 120 degrees for a bogie at 47 miles. We caught them before they went feet dry over the Cuban Keys. During the intercept we lost contact with GCI, so our wingman climbed to an altitude where he could relay our instructions. We were at 800 ft doing Mach 1.1 in full afterburner at three miles with an overtake speed of 470 kts and we got a ‘Break X’ just when GCI said to maintain a five-mile trail on the bogies. I didn’t have a visual on them, so I chopped power to idle with speed brakes out and did a high-g barrell roll to keep from flying out in front of the bogies. Luckily, we stabilized on their tail at about half a mile, and I saw them slightly high at 12 o’clock.

“C.C. Taylor was screaming that GCI said to maintain a five-mile trail and seemed very nervous about being so close, with Cuba only a few miles away. I told him that we should drop hack, but about then the two MiG-17s went into a 60 degree port turn. I immediately thought they saw us and I slid to the outside of their turn, re-confirmed I was ‘in Sidewinder’ and periodically, when at the bogies’ six o’clock, I would hear that beautiful `Grrrrrr’ Sidewinder tone. I thought the tight was on but then realized that the MiGs weren’t pulling g in their turn. Watching them for a few seconds more it appeared the wingman on the right was learning how to fly formation. We were now only seconds from being over Cuba, so I started a hard turn back towards Key West with C.C. feeling cocky and wanting me to get closer to the MiGs so that he could get a good look at them. But it was too late, and he griped all the way back to base. The flight lasted only about 25 minutes, and we landed back at base with only 800 lbs of fuel. Both Sidewinders came back with their seeker-head glass blurred (by low altitude, high Mach heat friction].” 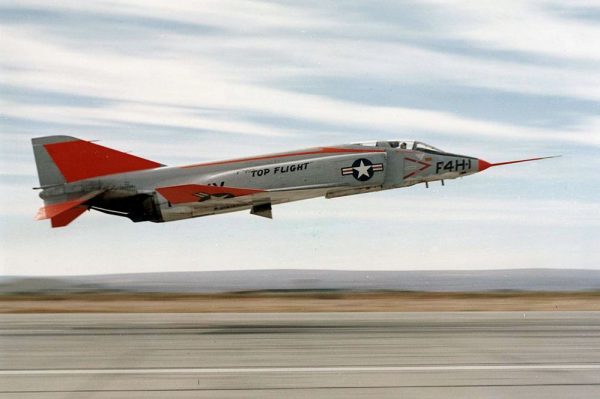