‘This rock is going God only knows how fast and is fifty miles straight up. If I can’t shoot down a SR-71, how in hell am I going to even begin to bring missiles to bear on a meteor?’ Ed Cobleigh, former F-4 Pilot.

The following story appears in Ed Cobleigh’s book War for the Hell of It: A Fighter Pilot’s View of Vietnam. Bestselling author Ed Cobleigh has been a fighter pilot with the US Air Force, US Navy, Royal Air Force, Imperial Iranian Air Force, and the French Air Force. He also served as an Air Intelligence Officer working with the CIA, FBI, and M16 on a variety of covert projects. He knows fighter planes, fighter pilots, and air combat well. His first fighter plane was the F-104 Starfighter and the last was the F-16 Viper. He flew 375 combat missions with the same number of landings as take-offs.

‘Tonight, a SR-71 “Blackbird” reconnaissance aircraft will be crossing North Vietnam to gather intelligence data. The location of the targeted data it has not been revealed to us lowly fighter pilots, nor has been the method of collection, we only know what type of aircraft is coming. The SR-71 was designed by the famous Lockheed Skunk Works in the late 1950s to be the highest-flying, fastest manned aircraft in the world. It still is. I am not trusted with any of the details of tonight’s Blackbird flight profile, other than it will occur well above 60,000 feet and involve speeds in excess of Mach 3. Indeed, we are instructed not to lock our jet’s air intercept radar onto the Blackbird if we can find it. To do so might reveal its conditions of flight on our scopes and we mortals are not authorized to know that data. Also, the navigator in the rear cockpit of the SR-71 might interpret our radar signal as that of an enemy and soil the space suit he is wearing. Above 50,000 feet, and the Blackbird flies way above, all aircrew are required to wear full pressure suits, capable of preserving life on the moon. I guess it is uncomfortable to be scared in a space suit.

‘We will have no contact with the SR-71; the two-man crew will take off from an undisclosed base far away from the theater of war (We all know it is Andersen Air Force Base on the island of Guam, but nobody’s telling). It will refuel from a special tanker containing unique fuel and zorch across North Vietnam like a manned comet. We don’t know the exact time of the passage, the course to be flown, any of the flight details, the call sign, the radio frequencies used, or anything else. Why should we? We’re only the escorting MiG CAP weenies with the live missiles.

“The SR-71 is a long, thin, black airplane with two giant afterburning engines. It moves at the speed of heat. I have never seen one, but I built a plastic model replica once. That’s as close I have ever come to the jet that I’m supposed to protect from being shot down.

‘The premier interceptor of North Vietnam’s air force is the MiG-21. It was designed in the early 1950s to be a light, cheap interceptor to attack lumbering bombers at medium altitude, it has a rudimentary radar, a single crewman, limited range, and no radar guided missiles. The North Vietnam Air Force rarely flies at night. Takeoffs and landings in the dark challenge its low-time pilots, not to mention the lurking danger of much more capable night fighters such as my Phantom.

‘I know that if I employ all my skill, use every ounce of performance I can wring out of my jet, and if my missiles work perfectly, I could still never shoot down a Blackbird. The chances of a primitive MiG-21 with an ill-trained pilot doing what I cannot are precisely zero.

‘So, why are we here at 33,000 feet over northern Laos in the middle of the night? The SR-71 belongs to SAC, which has the mission of Strategic Reconnaissance, or SR, from the plane of the same name. Since SAC took over this mission early in the Cold War, there has been a standardized operating procedure which dictates all reconnaissance flights are to have fighter cover. This requirement stems from the time when such flights were conducted by unarmed, modified versions of common aircraft. The introduction of the SR-71 did not generate any rethink of this policy, despite the vast difference in performance between the escorts and the escorted.

‘The commanding generals of SAC are fighting the Vietnam War from their impregnable redoubt, a deeply buried bunker at Offutt Air Force Base on the outskirts of Omaha, Nebraska. By orders of God and SAC, every SR-71 flight will have fighter cover that is the end of that story. So, my navigator and I will have a prolonged scenic night view of northern Laos, log some more flying time, and get to practice our night aerial refueling. It will be fun, but if I were a taxpayer, which I am, I would be pissed off at me for burning up several hundreds of thousands of tax dollars on a fool’s mission.

‘Our only hope is that the generals running North Vietnam are as obtuse as ours seem to be. Maybe they will send a MiG-21 up tonight for the pilot to prove that he can’t shoot down a SR-71 either. Maybe my navigator will spot the impotent MiG on its futile mission with our radar. Maybe we will get cleared to fire from whatever command authority there is in the region tonight. Maybe the moon will fall out of the sky.

‘I have no doubt that we are here over far northern Laos at two o’clock in the morning because our top Air Force commander in Saigon doesn’t have the guts to tell the other generals in Omaha that tonight’s mission is stupid. Being bold enough to point out unpleasant facts to the higher-ups can be harmful to your career.

‘But hey, what am I complaining about? It is a spectacular night to be flying. Am I a small part of the problem? Should I have told my squadron commander that tonight’s mission is a waste of everyone’s time and refused to fly? Should my boss have told the Wing Commander to take a hike on launching the night MiG CAP? Should the Wing Commander have called Saigon with his regrets? Where does the buck start? Never mind where it stops. Rather than confront this ethical dilemma, I chose to enjoy the scenery, the night sky, and fly my airplane.

‘I should have brought my binoculars tonight to look at the moon; it is really clear and bright at 33,000 feet with less than half of the earth’s atmosphere above us to obscure the view. As we turn endless racetrack-shaped patterns in the night sky we have no contact with anyone. The Blackbird crew won’t speak to us mere mortals. There are no other flights in the north tonight. Likewise it seems there are no air strikes in northern Laos either. We would have seen the red blossoms of exploding bombs and perhaps the ground fire trying to stave off the explosive rain. It is hard not to feel very alone.

‘Suddenly a bright purple fireball streaks across the sky above the Phantom’s canopy. It is moving from the southeast to the northwest and it is really hauling ass. The brilliant incandescent light illuminates the cockpit as bright as day, destroying what little night vision I have built up. I crane my neck and swivel my head and helmet trying to get a better view of the flame-trailing object. I yell into my inter-cockpit microphone to the Navigator.

‘Instantly my brain goes into data processing overdrive, examining all the possibilities. Instinctively I shove both throttles forward to their stops, commanding full military power from my jet’s engines. My leather-gloved left hand slaps down from the throttle to the missile arm switch; the missiles are hot. In the time this takes, my brain has considered several possible explanations.

‘Has the Blackbird blown up overhead our jet on its Mach 3 run? No, I have seen jets blow up in the air and this looks different. A destroyed plane slows down rapidly as it disintegrates and loses its aerodynamic form. This fireball is definitely not slowing down.

‘Is it a Surface-to-Air Missile, a SAM, fired at us? I don’t think so. SAMs are the size of telephone poles and much slower traversing the sky. The only way a SAM could light up the night sky like this thing is if the booster rocket was still attached and burning. But, this apparition is above us, above 33,000 feet, and SAM boosters drop off much lower. Thankfully, it isn’t a SAM.

‘What about an air-to-air missile fired by someone trying to bag our Phantom and us? That’s not it; the Soviet-supplied missiles the Vietnamese use are much smaller and burn white, not purple. We aren’t to be someone else’s kill tonight, at least not yet.

‘My adrenaline-fueled brain considers and rejects all these possibilities in the one or two seconds available, then comes up with the answer. It is a meteor, larger and brighter than any I have ever seen. A rock, probably the size of a grapefruit, is entering the earth’s atmosphere from outer space. Its kinetic energy is being converted to super hot gases by air friction as the rock burns itself out, maybe fifty miles up. Everyone who flies at night, all the Sewer Doers, see meteors. Nearly always, they appear as they do on the surface of earth, only brighter. This one is a luminescent monster with a visible size and odd color, but it is totally harmless.

‘My navigator thinks otherwise. Jack yells into the intercom.

‘Leave it alone! I think. This rock is going God only knows how fast and is fifty miles straight up. If I can’t shoot down a SR-71, how in hell am I going to even begin to bring missiles to bear on a meteor?

‘I am laughing so hard that I can barely fly but I turn off my microphone so as not to embarrass my navigator. Leave it alone I shall.

‘I settle down, get my heartbeat rate back into double digits, and see that our time on station is over. Our night MiG CAP is over. I wonder if the SR-71 crew saw the meteor. If they did, SAC will probably put them in for a hero’s medal as a reward for avoiding it.

‘Somehow, tonight’s mission all makes perfect sense now. We spent a gorgeous evening flying over on exotic land. We accomplished a night aerial refueling to burn jet fuel for no apparent reason. We kept an invulnerable aircraft from harm’s way. We didn’t shoot down the MiGs that weren’t there. Finally, left a meteor alone. It makes a fellow proud to be a soldier.’

War for the Hell of It: A Fighter Pilot’s View of Vietnam is available to order here. 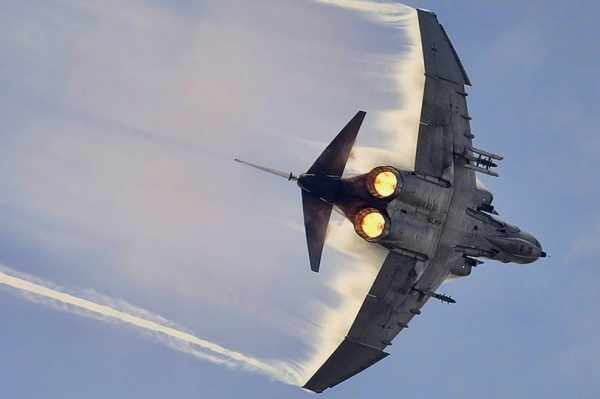 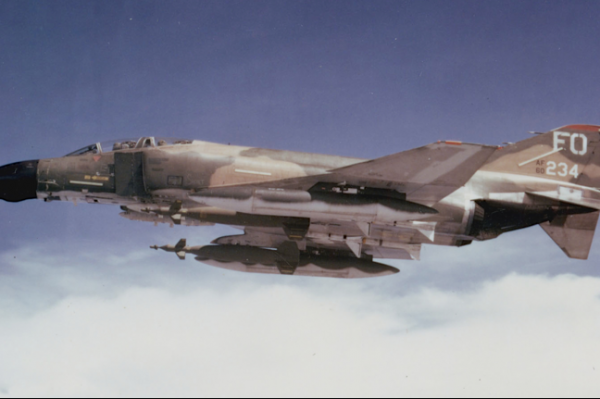 Paveway! Former F-4 GIB tells the Story of one of the First Ever Laser-Guided Bomb Runs During the Vietnam War