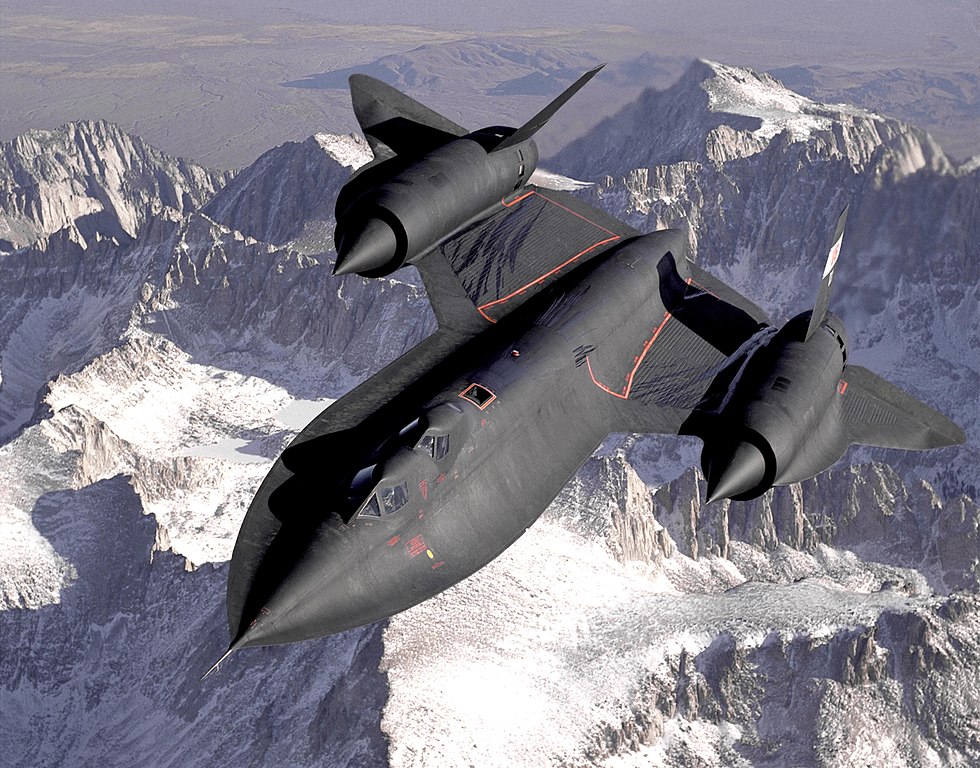 “We had no viable emergency airfields, and I did not want to be a no-notice, no–flight plan, single-engine emergency arrival at David Ben-Gurion Airport in Tel Aviv, especially since the Israeli government had not been informed in advance about the mission,” Jim Wilson, SR-71 pilot

Throughout its nearly 24-year career, the Lockheed SR-71 Blackbird Mach 3-strategic reconnaissance aircraft remained the world’s fastest and highest-flying operational aircraft. From 80,000 feet, it could survey 100,000 square miles of Earth’s surface per hour. And in the off chance an enemy tried to shoot it down with a missile, all the Blackbird had to do was speed up and outrun it.

Once the primary aircraft was a “go,” the spare aircraft returned to base.

If a completely new mission was tasked and had a level of difficulty that required in-depth mission planning, it could possibly take the crews several days to get all the details worked out with the mission planners. These were generally high-priority missions that arose from a crisis somewhere in the world.

The following account of one mission during the Yom Kippur War is told by SR-71 pilot Jim Wilson and it can be found in Col. Richard H. Graham book Flying the SR-71 Blackbird:

“On October 6, 1973, the armies of Egypt and Syria opened an offensive against Israel on two fronts, launching a coordinated series of air, armored, and artillery attacks across the Suez Canal into the Sinai and on the Golan Heights. The preemptive strike came as a result of a failure to resolve territorial disputes arising from the Arab-Israeli War of 1967.

“These disputes involved the return of the Sinai to Egypt and return of the Golan Heights to Syria. UN Resolution 242 and Egyptian president Sadat’s peace initiative failed to bring peace. Sadat wanted to sign an agreement with Israel, provided the Israelis returned all the occupied territories, but Israelis refused to withdraw to the pre-1967 armistice lines. Since no diplomatic progress was being made toward peace, Sadat was convinced that to change things and gain legitimacy at home, he must initiate a war with limited objectives.

“Along the Suez Canal, eighty thousand well-equipped members of Egyptian army who had crossed the Suez on rapidly constructed pontoon bridges attacked fewer than five hundred Israeli defenders. In the Golan Heights, approximately 180 Israeli tanks faced an onslaught of 1,400 Syrian tanks. Initial Israeli military losses were significant, and assistance was requested from the United States.

“National reconnaissance satellites did not have the capability that needed to sufficiently assess the situation. The 9th SRW at Beale AFB, California, was alerted to prepare to fly SR-71 missions from Beale AFB over the area of conflict and recover at RAF Base Mildenhall, England, a mission within the design capability of the aircraft, although a long and logistically difficult mission never before accomplished in operational environment.

“Within the first few days of the conflict, the supporting Arab nations initiated an oil embargo, making oil a weapon of war and contributing to a decision by the British government to deny approval to use Mildenhall as a recovery base. Plan B was rapidly drawn up to fly SR-71 out of Griffiss AFB, New York, through the area of conflict, and recover back at Griffiss. These never-before-accomplished twelve thousand—mile missions would require five air-to-air refuelings, the deployment of sixteen KC-135Q supporting tankers with special JP-7 fuel to Spain, and a specialized maintenance intelligence and operational support planning staff to Griffiss. The 9th SRW was well prepared, and in utmost secrecy, the forces were mobilized and deployed. The first mission was successfully completed on October 13.

“I was a fairly young pilot in the squadron at the time, with only one operational tour and about 120 hours of SR-71 time under my belt. On October 20, I was assigned to fly a backup SR-71 from Beale to Griffiss in an alert posture, prepared to fly follow-on missions. We flew successful missions on October 25 and November 2, where I served as backup pilot. My turn as primary came up on November 11. The excitement level was high, as I certainly wanted to be part of the Force and the wing’s success in completing the mission as tasked.

“Takeoff was at 2 a.m. on a brisk and clear autumn night with about fifteen inches of snow already on the ground. It was peacefully calm — until I lit each of the thirty-four-thousand-pound thrust afterburners. The first 450 mites had to be flown subsonic at 0.9 Mach, since we had to clear the commercial aircraft flight tracks out of Boston and New York to Europe before we could safely conduct air refueling operations. Radio-silent electronic rendezvous with three tankers 250 miles out over the North Atlantic at 3 a.m. went well, as did the seventy-thousand-pound (10,600-gallon) fuel offload.

“You don’t know the true meaning of dark until you’ve been in a situation like this. We likened it to refueling in an inkwell. After completing a few post-refueling checks, I lit the afterburners and started my acceleration to a leisurely Mach 3 cruise across the Atlantic. The airplane performed flawlessly, thanks to the extra-special effort by maintenance guys. About two thousand miles across the Atlantic on easterly heading, I watched with excitement as the sun peeked over horizon and came up right in my face in about a minute and a half—a nice vantage point for viewing this daily event.

“The second refueling was conducted in daylight, a couple hundred miles north of the Azores. This was another seventy-thousand-pound offload, thirty-five thousand pounds from each of the two tankers, while the airborne spare tanker was not needed. I started my second acceleration and headed for the Strait of Gibraltar. Cruising through the center of the narrow strait at eighty thousand feet with clear weather one hundred miles on both sides provided quite a spectacular view.

“As we proceeded down the Mediterranean toward the Middle East, the weather grew gradually worse as forecasted. The third air refueling south of Crete, although in poor weather, went as scheduled. After packing in a full load of eighty thousand pounds of JP-7 fuel, I lit the afterburners and started the acceleration toward the target area.

“At 0.98 Mach, just prior to going supersonic, maximum fuel flow full afterburner, a red engine-oil-quantity-low light illuminated steady on my emergency warning annunciator panel. I stared at it in almost disbelief, while scanning engine instruments, oil pressure, rpm, exhaust gas temperature, and nozzle position for other indications of trouble. Although there were no confirming indications of problems, I couldn’t just ignore the situation and continue on into the target area with the possibility of an engine failure at supersonic speed over the Sinai. We had no viable emergency airfields, and I did not want to be a no-notice, no–flight plan, single-engine emergency arrival at David Ben-Gurion Airport in Tel Aviv, especially since the Israeli government had not been informed in advance about the missions and they were in a battle for their own survival. I took the engines out of afterburner to access the situation and think about the best course of action.

“To my pleasant surprise, a few seconds after coming out of afterburner, the red emergency warning light went out. I was by now fairly well convinced that it was a false momentary indication, but it had cost me 2,500 pounds of critically needed fuel. My tankers were now eighty miles behind me heading further away. Getting rejoined to top off with fuel would present a new set of problems. I decided to light the burners and press on. Except for a five-second flash during acceleration, I never saw the light again.

“My flight track went down the Suez Canal past Cairo before making a left turn at Mach 3.15 to the north across the battle lines in the Sinai. I continued on a northerly course across the Dead Sea and over the center of the Golan Heights with the panoramic and point cameras providing imagery of hundreds of targets on both sides of the aircraft. Approaching the Lebanon border, I made a sweeping right turn over Syria and then back into the Sinai on a parallel flight path for maximum coverage. The airplane was running well, and I pushed it up a bit to Mach 3.2 before exiting the area near Port Said.

“Once out over the Mediterranean, I started a descent to twenty-five thousand feet for my fourth refueling. As fate would have it, not only I was low on fuel because of my previous oil warning problem, but also a thunderstorm had moved in over the scheduled air refueling contact point. My reconnaissance systems officer (RSO), using electronic azimuth and distance measure equipment, got me to within less than a mile behind my tanker, but the visibility was so poor that I couldn’t see the tanker. We continued twenty miles down track in lousy weather with only one-half mile and one thousand feet separation before a small break in the clouds permitted hookup. When we made contact and started transferring fuel, I had less than fifteen minutes of fuel remaining and was seventy-five miles from the closest straight-in emergency landing runway on Crete. Needless to say, I was very thankful to tanker buddies, RSO, and good equipment for that rendezvous. It gives new meaning to finding a gas station when you really need one.

“We completed a fifth seventy-thousand-pound air refueling near the Azores before the leisurely Mach 3 flight across the mid-Atlantic with a landing at Seymour Johnson AFB, North Carolina. We were met by 9th SRW download crews who had the photo and electronic intelligence equipment downloaded and on a dedicated AF courier flight to Washington, D.C., and the National Photographic Interpretation Center in twenty minutes. The flight covered 12,181 miles in ten hours, forty-nine minutes and included six hours, forty-one minutes of supersonic time and five air refuelings. After landing, I remember wondering what Charles Lindbergh would have thought about the advancement of aviation technology in less than fifty years. The 9th SRW was tasked to fly nine missions of this type and completed them all successfully.” 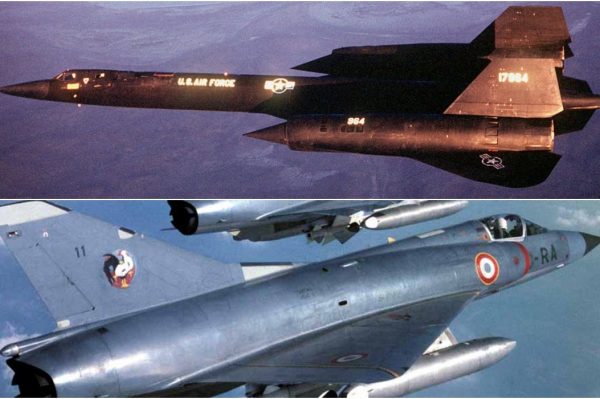