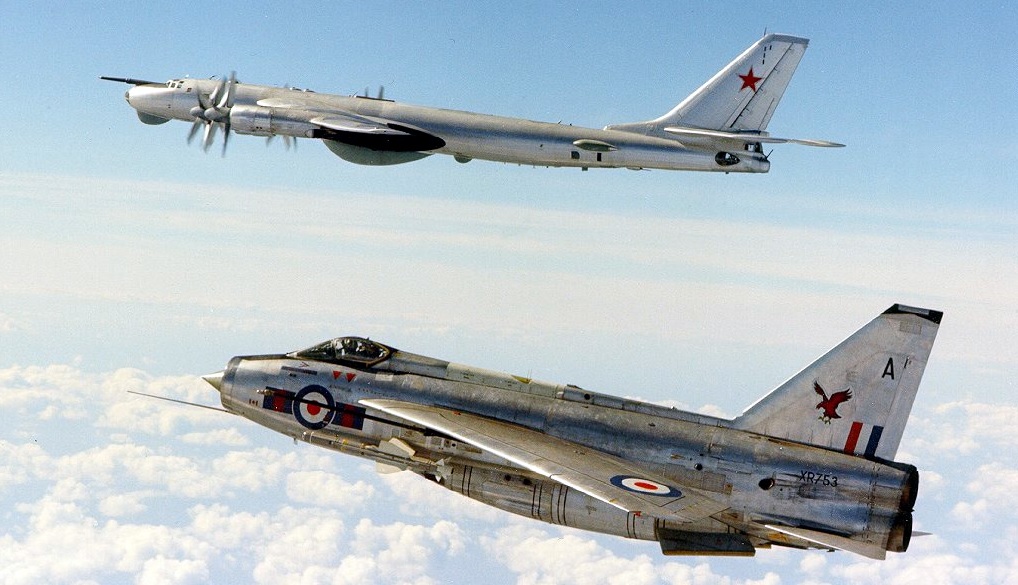 “While the mass contacts of 60…70…80 (who knows?) contacts which, as if raging bulls bent on widespread death and destruction, bore down on my sole Lightning, I spoke with the controller at RAF Saxa Vord. The controller confirmed that my radar information was correct and that the incoming hordes now ranged from twenty to sixty miles from my current position…,” Steve Gyles former Lightning Driver

Once the Lightning entered service, equipped nine squadrons and became the backbone of Britain’s air defense system for a quarter of a century.

“I was posted in 1968 to 11 Squadron at RAF Leuchars to fly Lightning aircraft. This proved, in a number of ways, a valuable precursor to my later posting onto F-4 Phantoms, and it was at an early stage of my time with 11 Squadron that I learnt in a most sobering manner of the need, one might say to expect the unexpected, a key quality for successful operation of the versatile and demanding Phantom. For it was in the spring of 1970, when the Soviet air force (Voyenno-Vozdushnye Sily) decided, sillily, to celebrate the centenary of the birth of that amazing gremlin in the Kremlin, Comrade Vladimir Lenin, that by chance I became involved in this heroic event. On QRA duty over the night 22/23 April 1970, I awoke with a start in the small hours, at around 04:00, when an inconspicuous-looking ‘squawk’ box in one corner of the pilot’s crewroom started to make strange sounds. At once, I tumbled out of bed — pilots on QRA duty were allowed to sleep as long as they remained in flying gear — and dashed across the room to listen closely. The controller’s detached voice now reverberated from the box: ‘Leuchars, Leuchars, this is Buchan…alert two Lightnings.’

“As the nominated Q1, the first to go in the event of a scramble, the other pilot, despite looking as bleary-eyed as I felt, ran with admirable élan out to his aircraft. As the Q2 pilot, I set off the scramble alarm, acknowledged the Buchan controller’s call, scribbled down the time, then sprinted to my Lightning. For a brief period, both pilots sat in their individual cockpits before the controller’s voice crackled through our bone dome earpieces when he ordered the Q1 Lightning to scramble. When my colleague was safely airborne, the controller stood me down from cockpit readiness but by that stage I was too worked-up to think of going back to sleep.

“[…] My colleague returned just as dawn was breaking. He explained how, in pretty much pitch-black conditions, he had shadowed two Soviet bombers which he reckoned were Tu-95 Bear D aircraft. As we talked about his flight, suddenly the squawk box came to life again. “Leuchars, this is Buchan,” said the controller, who sounded a bit breathless this time, “alert two Lightnings.” A small but significant hesitation followed after which, most unusually, he went on: “and as many more as you can manage.” The controller’s tone sounded almost plaintive when he continued: “we have eighty plus unidentified tracks coming round the North Cape.” For a second or so we two pilots stared at each other in astonishment. We said nothing, but our thoughts seemed to coincide: eighty plus? Is he bonkers? Has he lost the plot? Has World War III broken out? This, though, was no moment to prevaricate and as we set off the scramble alarm I made a dash for my aircraft (the Ql machine was in the process of engineering turn-round). My carefully placed bone dome, judiciously laid-out cape leather flying gloves and thoughtfully positioned seat straps facilitated rapid progress as I leapt into the cockpit, plugged-in my personal equipment connector (PEC) and buckled up the seat straps. Very soon, when I spoke with the controller, he gave height, heading and other details as he ordered me to scramble and to maintain radio silence.”

Gyles continues: “The start-up and take-off procedures went without a hitch and before long, just as pale shafts of dawn sunlight began to emerge across the area, I flew the Lightning in a north-easterly direction. With my airborne radar, navigational aids, and ‘identification friend or foe’ system switched off to thwart the possibility of tactical information being passed on by eavesdroppers, I had to keep a good lookout for other aircraft. Old-fashioned navigational techniques were needed to plot the Lightning’s position and from time to time this could be verified by peering down at fixed-position North Sea oil installations. After thirty or so minutes, when approaching the general area briefed by Buchan, I reckoned it was about time to break radio silence. Glancing inside the cockpit, I therefore switched on the identification friend or foe system, the navigational aids and the AI23B airborne radar. The radar took some moments to warm up but when it had done so, and when I squinted through the fold-up rubber viewing shade of the radar’s B-scope display, what I saw made my pulse start to race and my brain cells to go into overdrive. The radar revealed mass contacts too numerous to count up. I had expected something unusual, but this was overwhelming; my mind became a turmoil of conflicting thoughts as I struggled to absorb the implications of such a mass of hostile images.

“While the mass contacts of 60…70…80 (who knows?) contacts which, as if raging bulls bent on widespread death and destruction, bore down on my sole Lightning, I spoke with the controller at RAF Saxa Vord. The controller confirmed that my radar information was correct and that the incoming hordes now ranged from twenty to sixty miles from my current position. ‘Copied,’ I tried to sound nonchalant but my voice had become annoyingly shrill. I swallowed hard, continued to study the radar screen and wondered what the hell to do next.

“In a way, though, the dilemma was resolved for me when I visually spotted the first wave of Soviet aircraft. From that moment, more or less, my radar became redundant as I concentrated on the visual picture outside the cockpit. The Soviet hordes, mainly Tu-16 Badger and Tu-95 Bear aircraft, seemed to have organised themselves into groups of finger-four formation. Selecting a nearby group, I manoeuvred the Lightning for an interception and visident (visual identification) procedure. My nerves, as may be expected, were on edge; every move appeared to assume excessive significance. Having closed onto the selected group of Soviet machines and identified them as Tu-16 Badger aircraft, it was time to take photographs. Using a special 35mm camera with an automatic wind-on facility and plenty of film, I moved to the rear of the formation, took a photograph of both sides and underneath Badger number four, then moved on to the next machine.

“Just as I completed the photo shoot of the formation’s third Badger, my peripheral vision picked up a shadow passing over the Lightning’s cockpit. I glanced up to see another formation of four Badgers cross about 500ft above me. This seemed suddenly to emphasise the surreal nature of what was happening around me; as if caught up in some kind of crazy dream, I felt the need to pinch myself to return to reality. A small voice within me whispered, ‘Well I’ll be darned.’

“The situation, though, was no mere flight of fancy. There was a job to be done and before long, when I was joined by a Victor in-flight refuelling tanker, my Lightning’s fuel tanks were filled to full. For the next one-and-a-half hours, as I moved from one Soviet formation to the next, I was able to photograph proceedings for posterity. Never before had we seen such masses and never, hopefully, were we likely to do so again. The reaction of Soviet crews was intriguing: some would studiously ignore us and these Bears and Badgers presumably had political observers on board.

“Crews on the non-political machines seemed to react altogether differently — almost festively — with chicken legs, drink cans, maybe even the odd tumblers of vodka waved around happily. After all, I had to remind myself, this was supposed to be some kind of bizarre birthday bash. If, from time to time, I asked Saxa Vord for ‘pigeons’ (i.e. heading and distance) to base, some of the Soviet crews would helpfully hold a map against one of their side windows and point. I became increasingly amazed by the turn of events. I had become embroiled in the affair by chance and, ridiculously, I seemed, along with the Victor crew and another Lightning that eventually entered the fray, to represent the entire people of the Western world.”

Gyles concludes: “It was the following day, as I thumbed through the pages of various newspapers, that I came across a copy of one of my photographs in The Daily Telegraph with the caption: ‘Strike Command pilots are becoming increasingly adept at “Bear hunting” and although unable to communicate with the Russian aircrews, appropriate hand signals are invariably exchanged.'” 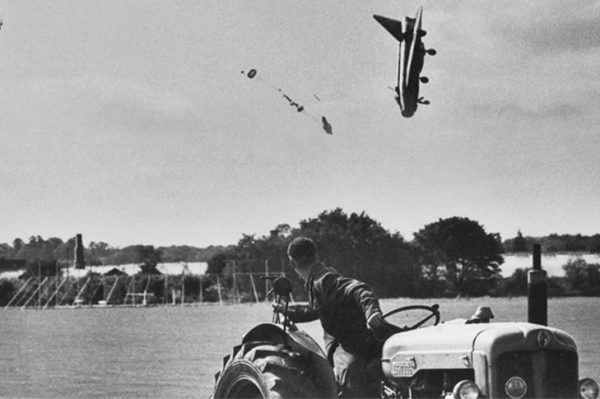 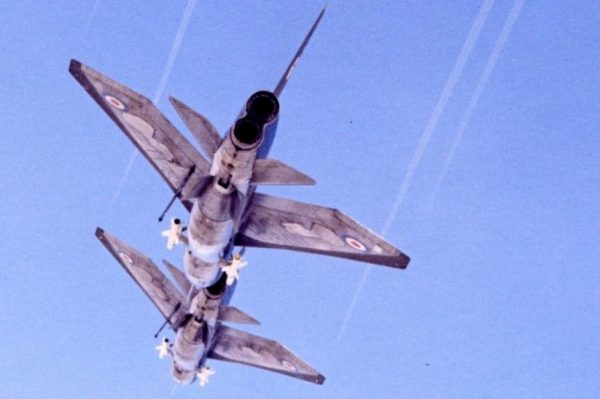