As the video in this post shows, the Sikorsky-Boeing SB>1 Defiant helicopter demonstrated mission-relevant cargo capacity by lifting a 5,300-pound Guided Multiple Launch Rocket System training load during a test flight at the Sikorsky Development Flight Center in West Palm Beach, Florida. With Defiant X, the US Army will deliver troops and cargo in future combat at twice the range of the current fleet.

According to a Lockheed Martin news release, the lifting power demonstrated by SB>1 Defiant in this test equates to an Infantry Squad Vehicle, hundreds of thousands of rounds of ammunition, more than 600 gallons of water, or ~240 cases of MREs – resupply vital to Soldier survival in a contested environment.

The SB>1 Defiant test flight program continues to demonstrate the military utility of the Defiant X design and further reduces the risk for the US Army’s Future Long-Range Assault Aircraft (FLRAA) program.

In May, SB>1 Defiant exceeded 230 knots in level flight.

SB>1 Defiant is the technology demonstrator proving out transformational capabilities for the Defiant X weapons system, the Sikorsky-Boeing team offering for the US Army’s Future Long-Range Assault Aircraft (FLRAA) competition as part of the Future Vertical Lift program. The Sikorsky-Boeing team designed Defiant X to serve the specific needs of all U.S. Army FLRAA missions – offering a holistic approach to speed, range, and maneuverability. The external load capacity of Defiant X significantly increases its potential for humanitarian assistance missions at home or abroad.

Defiant X flies twice as far and fast as the venerable Black Hawk helicopter it is designed to replace. Currently undergoing testing in a digital combat environment, the aircraft continues to prove itself the most survivable platform for mission requirements. 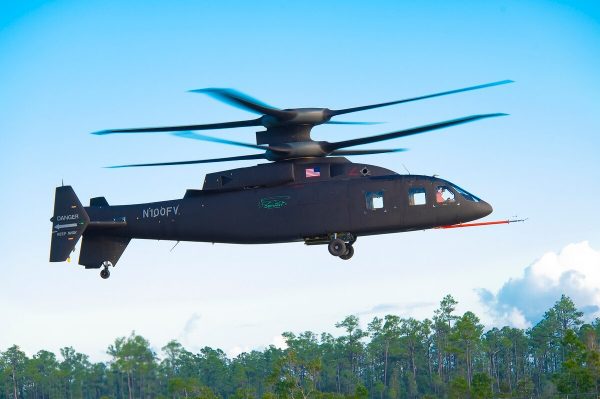