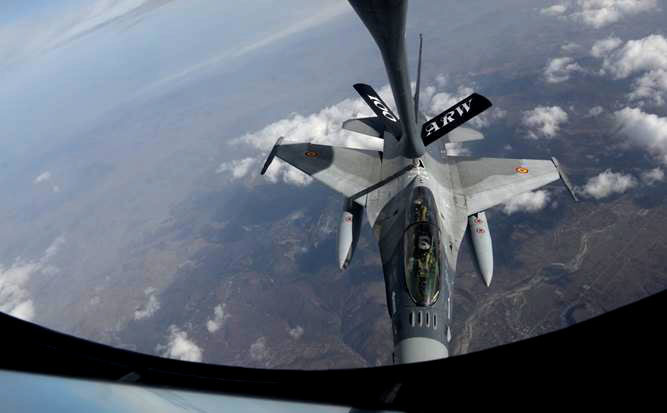 “I transitioned from MiG-21 Lancer to the mighty F-16 in 2014. Since then, I have discovered that every day equals a new challenge,” Capt. Mahaita Marin, Romanian Air Force

History was made when the U.S. Air Force (USAF) and Romanian Air Force (RoAF) made their first air refueling contact Feb. 28, 2017, over Romania. With the help of the USAF 100th Air Refueling Wing (ARW) and one of their KC-135 Stratotankers, the RoAF became certified to refuel from all U.S. KC-135s, strengthening their partnerships and regional stability.

“Every event (we have) accomplished in the F-16 has been somehow historical,” said RoAF Capt. Mahaita Marin, F-16 Fighting Falcon pilot. “The air-to-air refueling is a milestone for a developing Air Force, and I am definitely proud to be part of it. Not proud for myself – just a bit maybe – but proud that the hard work of so many people is giving the results that we all look for.”

The RoAF initiated their F-16 program last year and in that short time, have refueled only from an Italian tanker, but must obtain familiarization training and certification to receive fuel from a U.S. tanker and further their NATO integration.

The 100th ARW, based at RAF Mildenhall, England, sent a 14-person crew and a KC-135 to Romania to help make this happen.

“It’s important for the interoperability between the two nations, because it shows our continuing cooperation with our partner nations here in the region,” said Senior Master Sgt. Lee Adkins, 351st Air Refueling Squadron superintendent and KC-135 boom operator. “It’s amazing to be a part of and it’s something I don’t take lightly.”

From the perspective of the KC-135 and its crew, this mission was rather routine. The 100th ARW is the only U.S. air refueling unit in the European and African theater. The crew is highly trained and experienced; therefore, they knew their mission and accomplished it successfully.

But for the RoAF’s new F-16 Fighting Falcon pilots, this day was anything but routine.

“I transitioned from MiG-21 Lancer to the mighty F-16 in 2014. Since then, I have discovered that every day equals a new challenge, but the reward of being able to deal with all of them is huge,” Marin said. “Throughout the numerous challenges that we had to bear, AAR was clearly a special one, being completely new. This was the first time that we did it without the supervision of our Portuguese friends – from preparing the jets, to flying and parking them back safely. Somehow we were a bit anxious to discover if we were truly ready for it, but from the moment of the very first briefing it was clear that we are on the same sheet of paper. I left the briefing confident in the success of the training, and the end of the week gave me that great feeling of a job well done.”

With U.S. air refueling abilities extending around the globe, the qualification and training increases interoperability between the two countries – especially in real-world situations. Both crews were excited to learn that they were very much on the same page when it came to air-to-air refueling (AAR) techniques and procedures.

“(The RoAF crew) gave their briefing first and it was phenomenal.” Adkins said. “It actually covered most of what we wanted to cover anyway so I think that set a great tone for how this mission was going to be. They had very good academic idea of what they were going to be doing, and even though they hadn’t flown with us, I had an air of confidence that they were going to be successful.”

As the short mission came to a close and was deemed successful, the five-day training operation has now changed the future of the two NATO partners forever.

“Being able to sustain an air operation is probably the hardest thing to achieve,” Marin said. “The AAR capability is making us able to keep jets in the air for a prolonged period of time, being one of the most important features of the air defense system. I think this capability welcomes us among the assets of NATO, making us credible partners.”

Whenever the U.S. and other countries are called into action, it takes place within the joint, allied and partner teams, and the more they exercise and train together, the better they’re able to operate.

“This is someone else that’s on the team now,” Adkins concluded. “That can only be a good thing.”