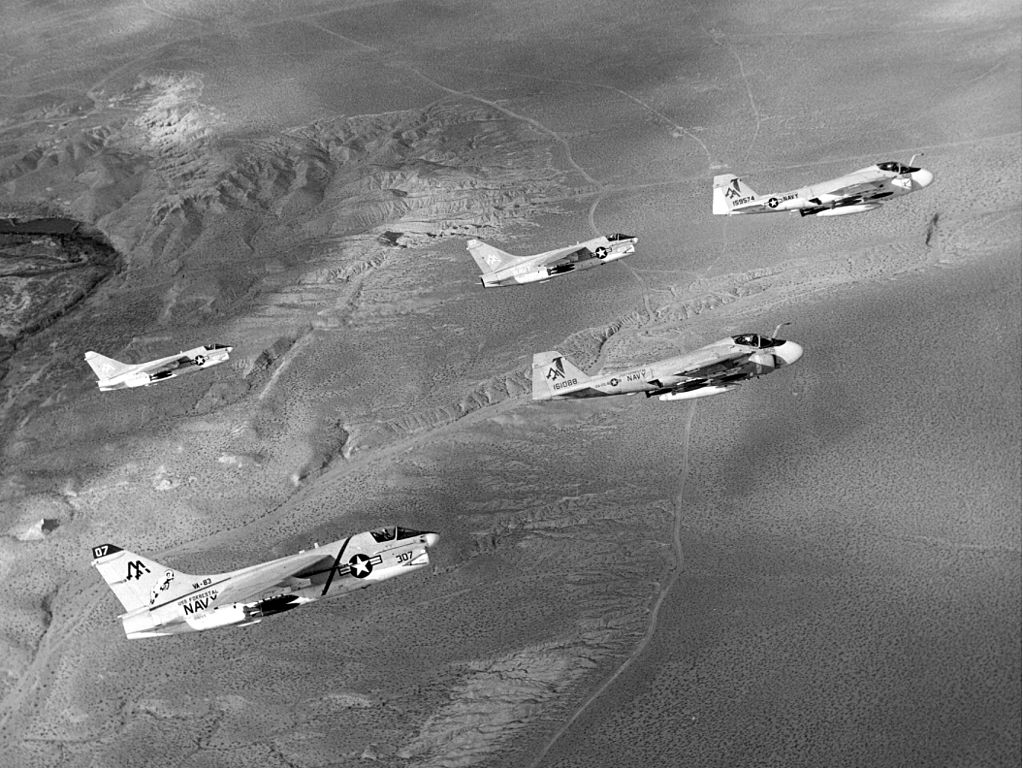 The A-6 crew ejected, and Lt Mark Adam Lange soon succumbed to injuries suffered in the process of leaving the aircraft. B/N Lt Bobby Goodman  was turned over to Syrian troops and duly spent several weeks in a jail near Damascus

The Grumman A-6 Intruder was the ‘Main Battery’ of carrier aviation throughout the Vietnam War, and it remained in service with the US Navy and US Marine Corps until 1996. Truly an all-weather, day/night precision bomber, the A-6 was still the most potent strike aircraft on a carrier flightdeck during the U.S. strike on Lebanon in 1983.

After Operation Urgent Fury in Grenada in 1983, the USS Independece (CV-62) pressed on to the Mediterranean, where it finally relieved USS Eisenhower (CVN-69), which headed for home. As explained by Rick Morgan in his book A-6 Intruder Units 1974-96, these were still the days of Sixth Fleet having two carriers assigned, and CV-62 joined USS John F Kennedy (CV-67), which had CVW-3 — the first ‘dual A-6’ air wing — embarked. The senior officer on board CV-67 was the legendary Vice Adm Jerry O Tuttle, a short, fiery Naval Aviator with a light attack pedigree who was double-hatted as Commander, Carrier Group Two as well as Commander, Battle Fleet Sixth Fleet.

Foremost on the international stage at this point was the disintegration of Lebanon, as what had once been called ‘the Paris of the Middle East’ degenerated into violence and chaos involving multiple groups using assorted religious justification. The U.S. government, fearing a much bigger war involving Syria and Israel, put Marines ashore in Beirut in order to help stabilise a situation that was rapidly headed south. It also placed two carriers off the beach to show national resolve.

According to one of Turtle’s staff officers, Lt Cdr Joe Hulsey, ‘we had been on constant alert for weeks, with one carrier being in “alert 30” with aircraft fully loaded and crews briefed, while the other flightdeck conducted normal flight ops. This changed every 24 hours in order to share the load. The force was ready, having prepared more than 300 potential targets in the region. We had timing and weapons loads planned for all of them, and all of this information was sent up the chain to Sixth Fleet and CINCEUR [Commander in Chief, US Forces Europe] so that they’d know what we were prepared to do. On top of that, we had Jerry Tuttle in charge. He was exactly who you’d want in that position if you were going over the beach.’

The hair-trigger condition continued until about Dec. 1, when the carriers received direction to stand down from constant alert. Then, at about 0300 hrs on the morning of the 3rd, a Flash order arrived from Sixth Fleet to execute strikes against six specific targets in Lebanon, with a time on target (ToT) of only four hours later. The order was initially believed by the staff to have been sent in error, but as messages and voice traffic flashed between the ships and Sixth Fleet it became obvious that ‘somebody’ much higher had decided on military action with absolutely no regard for what it took for the operational forces to actually execute it.

Aircraft were not ready or correctly spotted on the flightdeck, proper ordnance was not loaded and crews were not briefed. On top of that, only one of the six specified targets had actually been prepared by the ships, and the other five, considered militarily irrelevant, were all new. While the ships rapidly woke up, it was confirmed that the ToT was an absolute that had to be met, which led to an all-hands effort to carry out their orders.

What followed was a disaster.

Kennedy launched 12 Intruders (seven from VA-85 and five from VA-75) and Independence sent five aloft, along with several KA-6Ds (from VA-176). A-7Es from ‘Indy’ went as well, as did Tomcats and Prowlers from both carriers. Ordnance loads were limited by time available and, in most cases, were not optimum for their targets — Syrian tanks and AAA sites in Lebanon’s Bekaa Valley, close to the Syrian border. Only one Intruder from Kennedy got off with a full bomb load. Aircraft went feet dry at medium altitude at dawn, and almost immediately were engulfed by AAA and missiles. While EA-6Bs appeared to render any radar-guided SAMs ineffective, the sky was full of infrared-guided weapons blind to the Prowlers’ magic.

The one fully loaded Intruder, ‘Buckeye 556’ (BuNo 152915), found itself working hard to keep up with the rest of its formation. On board were pilot Lt Mark Adam Lange and B/N Lt Bobby Goodman. Infrared decoys and flares filled the sky as aircraft tried to avoid the SAMs coming up from the ground. ‘Buckeye 556’ was soon hit, probably by a Syrian 9K31 Strela-1 or Strela-2 infrared-guided SAM. The crew ejected, and Lange soon succumbed to injuries suffered in the process of leaving the aircraft. Goodman was turned over to Syrian troops and duly spent several weeks in a jail near Damascus. He would be released after a flurry of diplomatic work that included the appearance of The Reverend Jesse Jackson.

Through the hail of fire, the Intruders and Corsair IIs delivered ordnance on their assigned targets, with VA-176 specifically dropping 25 Mk 82s, 23 Mk 83s and 30 Rockeyes.

CAG-6, Cdr Ed Andrews, was flying VA-15 A-7E ‘Active Boy 305’ (BuNo 157468) and he took over as on-scene search and rescue commander for the downed Intruder. He was soon hit by an infrared-guided SAM himself and had to eject off the coast, where he was picked up by friendly fishermen and eventually returned to the U.S. Navy. VA-15 Corsair II ‘Active Boy 314’ (BuNo 157458) was also hit, but its pilot was able to recover aboard Independence.

As stated by Lt Cdr Hulsey, ‘even six more hours would’ve made all the difference in the world, but they wouldn’t give it to us. We found out later that the source (presumably out of Washington, D.C.) didn’t even get the time zone conversion right in the message, which cost us at least two more hours to prepare.’ As the saying goes, ‘Success has a thousand father while failure dies an orphan.’ In this case, who actually picked the target and ToT is still unknown. While bombing results were officially describe as ‘effective’, on board both ships, and throughout carrier aviation, there grew a rapid and long-lasting bitter taste over the strike. Professionally, the event was viewed as nothing short of a failure that would eventually lead to a number of changes, including the formation of ‘Strike U’ at Fallon to develop and teach more effective air wing tactics. 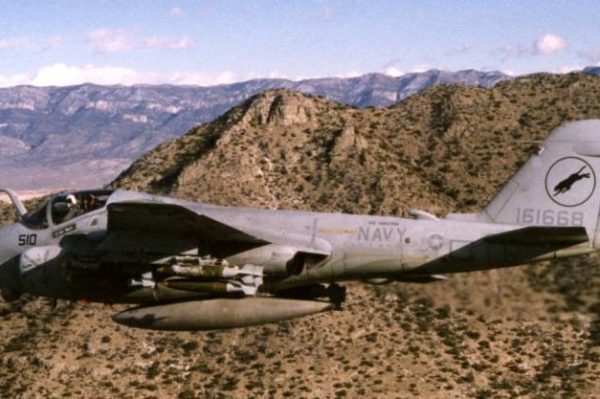 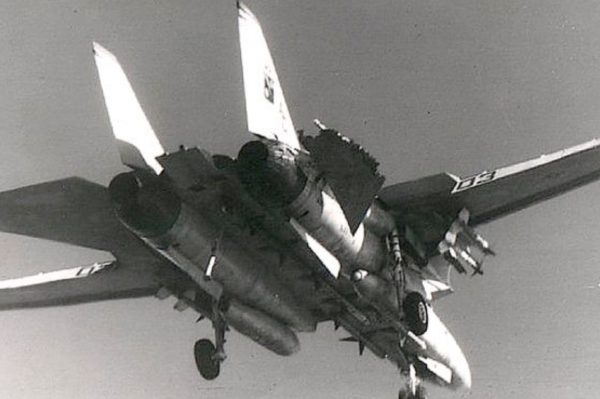