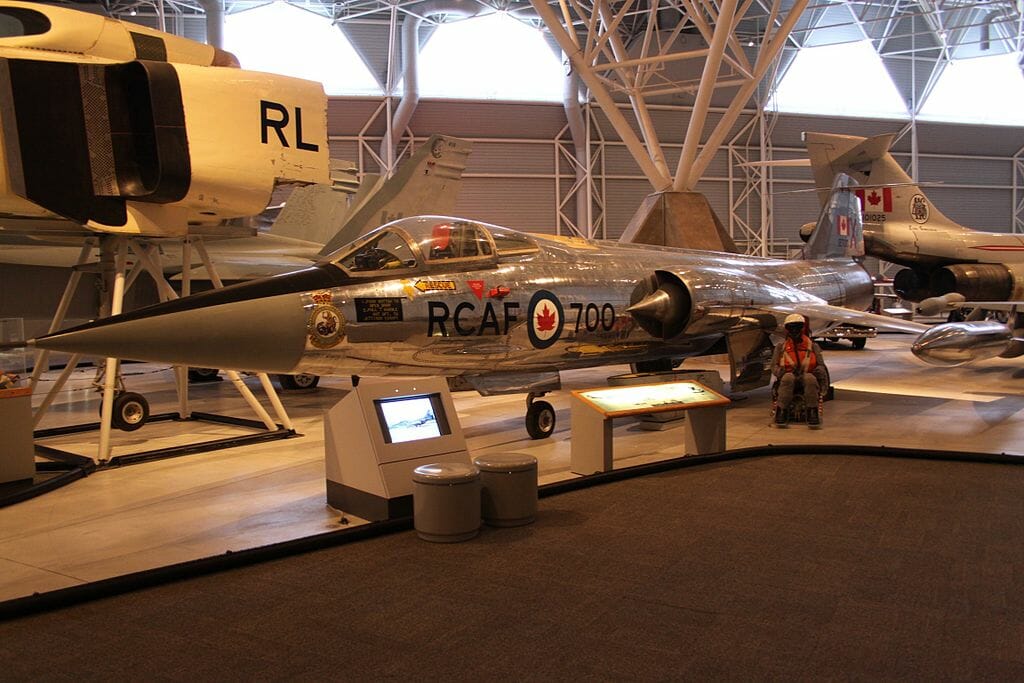 ‘On December 14, 1967, when I managed to reach 100,110 feet and authenticate it, we wisely decided to call it a day. Interestingly, that record still stands today as a Canadian national altitude record,’ Bud White, RCAF CF-104 pilot who set the Canadian Aircraft Altitude Record

The U.S. Air Force (USAF) procured about 300 Starfighters in one- and two-seat versions. Furthermore 1,700 F-104s were built in the United States and abroad under the military aid program for various nations including Canada, West Germany, Italy, Norway, the Netherlands, Belgium, Denmark, Greece, Turkey, Spain, Taiwan and Japan.

Noteworthy during the Cold War, America and the Soviet Union hotly contested all the prestigious aviation records, especially the World Absolute Speed and Altitude records of the International Aviation Federation (Federation Aeronautique Internationale, FAI). As explained by Patrick Martin in his book Canadian Starfighter The CF-104 and CF-104D in Canadian Service 1961 – 1986, in 1959 the World Absolute Altitude record was held in turn by the Russians, the U.S. Navy and finally by the USAF’s Captain Joe Jordan who zoomed to 103,395.5 feet in a modified F-104C. In 1961, Col Georgi Mosolov recaptured the record for Russia in a rocket-boosted MiG-21, called E-66A, when he attained 113,892 ft.

The USAF then modified three F-104As to a zoom Aerospace Trainer NF-104A configuration with a 5,250 lbs thrust, canted throttleable liquid fuel rocket at the base of the vertical stabilizer, two foot wing extension panels and nose exhaust ports to accommodate Reaction Control System ‘beepers’ for roll, pitch and yaw ‘attitude’ control for the low dynamic pressures (‘q’) of inner space. Following 41 Cat 1 test flights and another dozen operational and zoom flights (reaching an unofficial 120,600 ft), the program was taken away from the USAF’s prime test pilot Robert Smith and turned over to Col. Chuck Yeager for him to recapture the World Record. On Dec. 10, 1963, Yeager lost control during a zoom flight, entered a flat spin, ejected, and his NF-104 was destroyed. Although approximately 50 more productive flights were made in NF-104As, the program was ‘shackled’ and the USAF was denied any further attempts to recapture the World Altitude Record.

‘On December 14, 1966, at our RCAF’s Aerospace Engineering Test Establishment in Ottawa, my USAF Exchange Test Pilot Jim Reed came to me with an exciting idea: beat the Russians and capture the Absolute Worlds Altitude Record and do it in Canada’s Centennial Year. Jim proposed we use our CF-104 12700 lighten and modify it; take advantage of the Jet stream; and improve the zoom profile. As our studies progressed into 1967, Air Material Command and Orenda readied three uprated J79 engines for us; Lockheed helped with extended inlet nose cones; the National Research Council (NRC) National Aeronautical Establishment (NAE) began development of an extremely sensitive vane to measure angle of attack (alpha); a detailed jet stream survey was undertaken; and major changes were made in the electronics bay and pressurization system of 12700. We also had to design/develop light weight alpha/beta vanes (with the NRC Flight Research Section) to go on our existing plastic nose cone & pitot boom. A major threat was the ‘flat spin mode’, but the Chief of the Defence Staff General Allard and Minister of Defence provided strong support, and the project moved into high gear by midsummer as a highly classified military project.

Physiological training and two Gemini full pressure suits were obtained through the institute of Aviation Medicine and the USAF Surgeon General, when Ron Hayman and I flew down to Tyndall Air Force Base. Later, we obtained valuable _Tssistance flying the ‘zoom’ simulator at Edwards Air Force Base, and I was able to fly a number of F-104 ‘Zoom’ flights on their phototheodolite instrumented range.

We finally got airborne in October; quickly worked up the speed to mach 2.3 while confirming engine performance; and worked out a method to find the core of jet streams. We created absolute silence when we briefed Transport Canada, and explained how we planned to fly our ‘zooms’ through the Toronto/Ottawa/Montreal triangle — with a ‘block’ airspace trough their most densely-travelled airspace in Canada. But remarkably within days, dozens of air traffic controllers were vectoring hundreds of commercial flights around our zoom flights, without any explanation to the commercial carriers.

Authentication was a major problem with the FAI 1% accuracy requirement and with most of our flights above cloud, until the NRC Defence Research Telecommunications Establishment at nearby Shirley’s Bay came up with a concept to use their 30 foot microwave tracking dish. Eventually, we installed 4GHz ‘beacons’ and a switching arrangement in 12700, tracked them in azimuth and elevation with the 30-ft dish; tied their measurements to an atomic clock; and obtained distance from a 1GHz beacon and a modified IFF/SIF transponder in the aircraft. Unable to use phototheodolites, this turned out to be a World’s ‘first’ non-visual authentication before the FAI!

In all we flew 42 flights in 12700, 25 of them zooms, and twelve of those safely above 95,000 ft. But on these later flights our hoped-for benefit from the strong jet winds dropped off and i was running out of control authority going over the top. There, stick nose-down pitching moments at low produce strong left yaw (due to gyroscopic coupling) and needed full right rudder. On December 14, 1967, when I managed to reach 100,110 feet and authenticate it, we wisely decided to call it a day. Interestingly, that record still stands today as a Canadian national altitude record.’