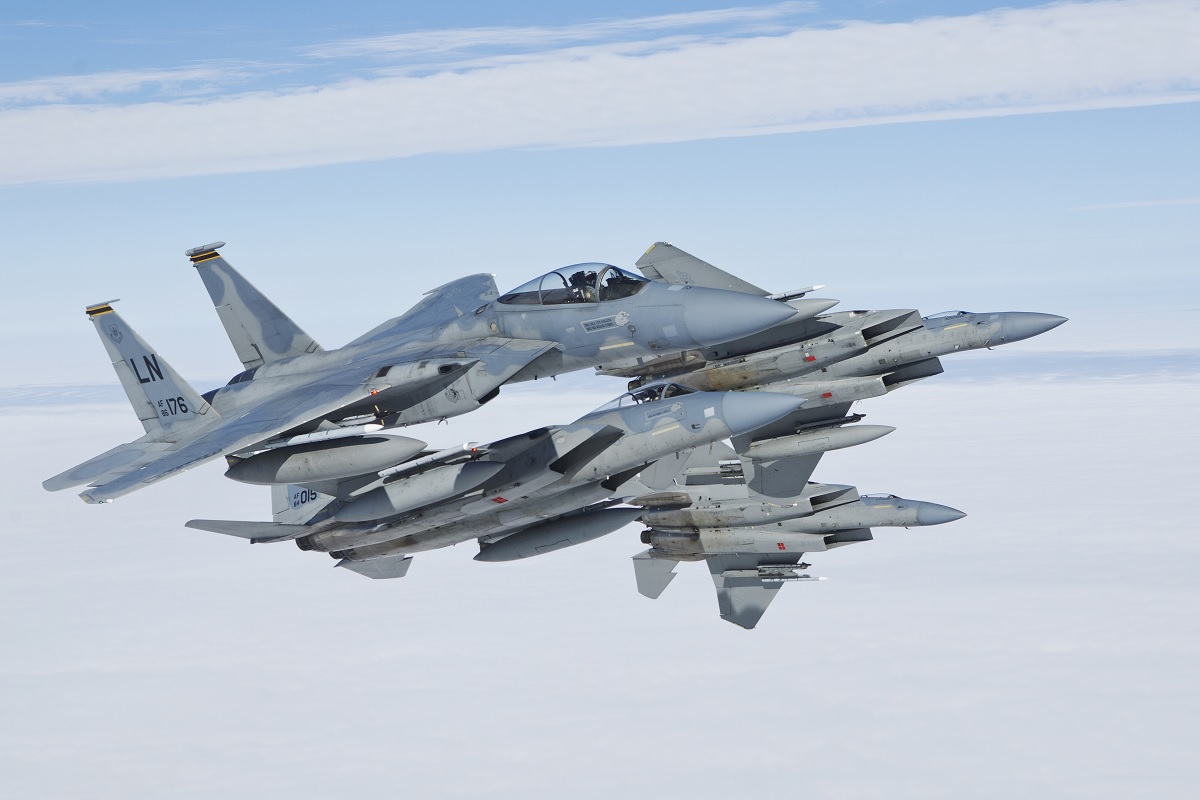 “That was the first time it dawned on me that flying jets is fun and exciting but also could kill anyone, any day-even me,” Maj. Ben “Evil” Cook, USAF F-15 Eagle driver

The incredible story in this post provides an excerpt of a from-the-cockpit account appeared in the March 2016 issue of Combat Aircraft magazine of what it’s like landing an F-15 Eagle at Keflavik International Airport (KEF), Iceland, in whiteout conditions.

During a deployment to Iceland, Cook (who was a 100-hour, young wingman at the time) and his fellow Eagle drivers found themselves working “in gale-force winds while snow dumped down like monsoon rains. We went through the motions of briefing a 2-v-2 intercept ride, but in everyone’s mind the weather was going to prevent us from flying,” as Evil recalls.

Nevertheless the time got better and the F-15s took off for the training sortie. According to Cook, after their third intercept, Keflavik approach called them. “Knife 21 this is Keflavik approach.” “Go ahead Kef.” “Yes, sorry to interrupt but the weather here is getting very, very bad. You might want to come home now.” “Knife: fence out, tapes off, cleared radar trail, push 1 aux.”

Soon after Keflavik supervisor of flying (SOF) informed Knife flight that only 10 to 15 minutes remained before the closure of the runway. Cook explains: “Keflavik approach advises us to take vectors to ILS (instrument landing system) runway 11. It is the only runway that they’ve been trying to keep open with the snow removal. […] We have quite a bit of gas-enough to get to our next closest divert base at Stornoway, Scotland, over 1,000 miles to the south-east across the frigid north Atlantic. An ops check revealed that we had too much gas to land safely on what was sure to be a slippery and very icy Keflavik runway.”

Flight lead instructed the other jets to dump gas until they had 11,000lb remaining. “We are supposed to have 10,500lb to make the divert profile to Stornoway,” says Cook. “However the general rule for a dry runway is no more than 1,000lb of fuel for every 1,000ft of runway-and this one is icy. The heavier we land, the faster we are going and the harder it is to stop. 10,500 it is!”

Shortly after the Eagle drivers started to dump fuel, Keflavik SOF came to the radio with panic in his voice. “Knife 1, SOF, Stop dumping gas NOW!” “Knife 1, dump switch off,” with 2,3 and 4 responding soon after. Then Keflavik SOF informed Knife flight that they could divert to Stornoway if they needed it but that they also needed at least 12,500lb to reach the divert base. “Aux, Knife 1 is 11.7″ ” ‘2 same” ” ‘3 same” “Gulp ‘4 is 11.3” “SOF, Knife 1. It looks like we are all landing at Kef today, I hope you have no more bad news for us.”

The SOF didn’t have any more bad news, but something bad came from Keflavik approach instead. “Knife 2, Kef approach, winds are variable 330 to 030; 40 gust 52. Ceiling 250′ overcast with blowing snow. Knife flight you are cleared to land runway 11. Good luck.” According to Evil “this is officially bad. Controllers never say ‘good luck’. The winds are now 90 degrees off where we want them, which means we’ll be flying nearly sideways on final to the runway. This has quickly become a very serious emergency-type situation.”

Passing 4,000ft Cook took a look at the ocean surface behind him. Even if he was still over 20 miles offshore, the seas were so agitated they looked about 3ft deep and several icebergs were bobbing in the pale green water. “I immediately became aware of how much I had ben freaking out. Seeing that chaos below me in the ocean actually calmed me down. I reached down with my left hand and moved the ejection seat arming handle to SAFE. […] If something happened and I couldn’t land I wasn’t punching – I was going to die warm, not in that sub-zero water trying to clamber my big behind into the tiny one-man raft attached to my seat kit.”

The F-15 pilots intercepted the localizer, and waited for their turn to get the gear down and start the approach. “Knife 1, final approach fix, gear down, full stop.” After some endless seconds lead came on the radio again. “Aux, Knife 1 is on the deck. It’s sporty boys, but you can make it. Runway will be way right on the canopy when you break out.”

Shortly after number two reported he was down and broke out around 300ft and number three called gear down.

It was Cook turn.

Cook recalls. “The yellow steering needles on the ADI (attitude director indicator) seem to dance all over the place as I start down the glide path for runway 11. I can feel the winds gusts pick up, rocking the jet and pushing my heading off the mark. Constant corrections are required now in all three axes as I pass through 1,500ft. I’ve never used this much heading correction to track an inbound course before.”

Number three came on the radio. “Aux, Knife 3 is on the deck. 4, skulls up, it’s getting really slippery, take the cable if you need it.”

At 300ft Cook couldn’t see the runway yet. “At 250ft I look up and barely see something through the clouds. My peripheral vision catches a flashing light to my right. Just then I’m out of the weather but there’s just rocks and snow in front of the HUD… I look to the right, almost behind the canopy bow, to find the runway. I only have time to rip the power to idle, slam a full boot of right rudder in and correct with left and aft stick as I abruptly arrive on terra firma. I am now careening down this runway-cum-ice rink at 160kt in a 37,000lb tricycle with very little braking action.”

Cook reached up to flip the hook switch down but he couldn’t find it. “I can’t take my eyes off the runway. I’m spending every ounce pf concentration on reining in my jet to settle down and find some braking action. At mid-field I wrangle it down enough to relax the death grip I’ve had on both stick and seat cushion for the last 30 minutes. I skid to a stop on the runway.”

In the following days the Eagle drivers re-hashed that recovery a thousand times, as Cook recalls “The more we talked about it, the more it scared me to realize the position I had been in. That was the first time it dawned on me that flying jets is fun and exciting but also could kill anyone, any day-even me.” 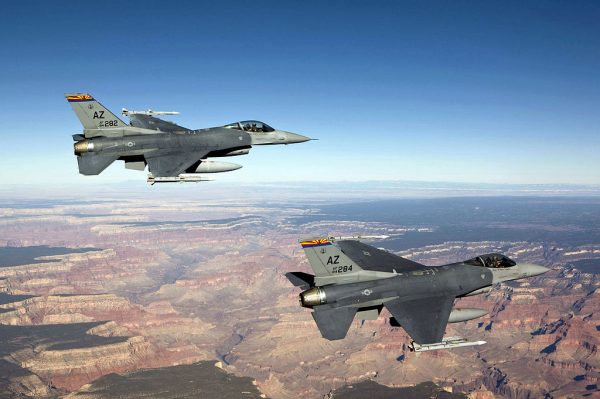 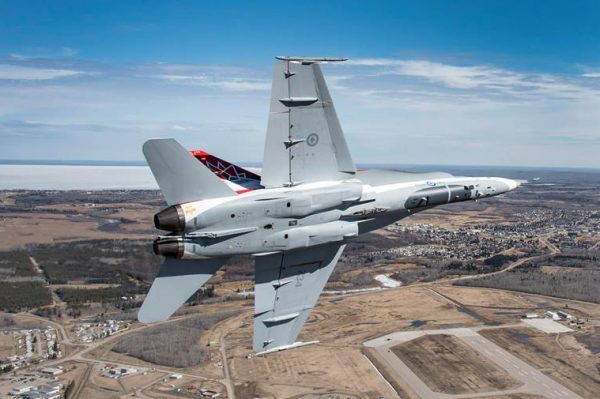 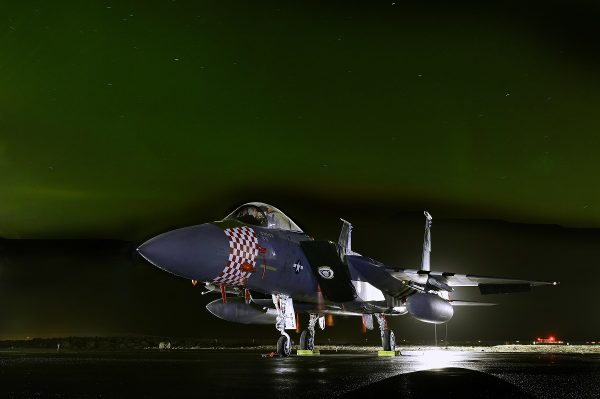 Cool photos show “The King,” the last of the 48th FW’s Heritage F-15 aircraft, in the green light of the Aurora Borealis