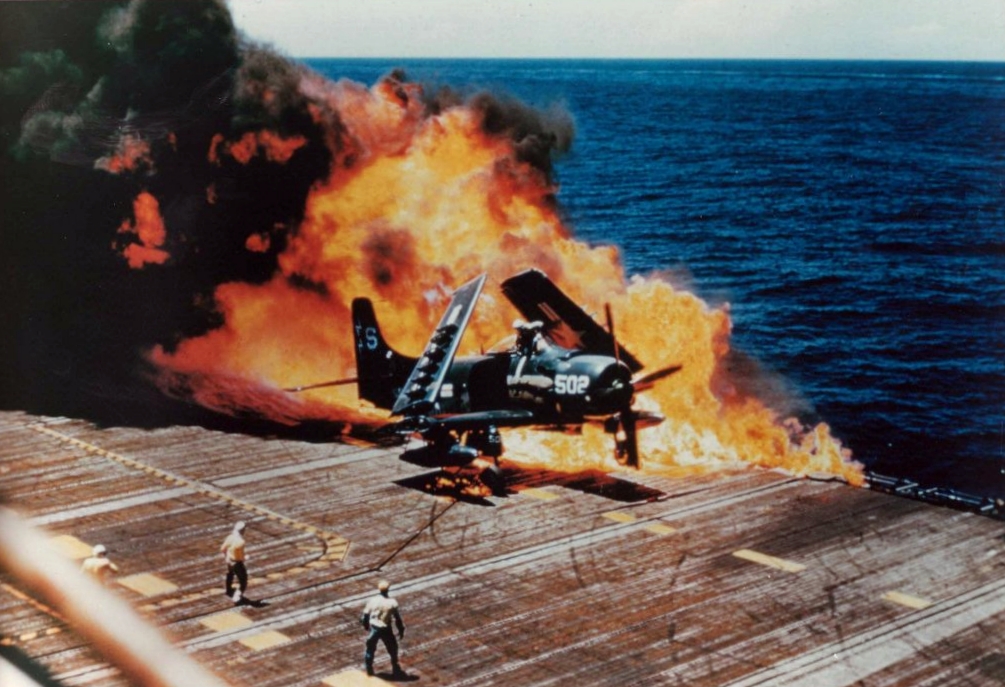 Lieutenant William L. Harris, Jr., on his first combat mission, made a dive-bombing run on a hydroelectric plant north of Hungnam. He didn’t realize he’d been hit until he returned to the ship. Maintenance personnel found fragments of concrete in the cowling and wings, verifying the accuracy of his bomb drops. Harris earned the nickname “Cement Mixer.”

The Korean conflict generated many remarkable stories of pilots who survived heavy battle damage or in extremis situations in the sturdy Skyraider:

Ensign John Rogers landed after being hit on a combat mission from Bon Homme Richard (CV 31), but as he caught a wire the engine froze. The mechs discovered a hole where an entire lower cylinder had been shot away—testimony to the Skyraider’s staying power.

A “Guppy” version of the AD with a radome underneath and Commander William H. Rogers at the controls was on Valley Forge’s (CV 45) port catapult for a night mission when the hold-back fitting broke prematurely. The Skyraider slid along the ice-coated deck. Rogers pulled back on the stick while hitting the brakes, but the AD continued to slide. He alerted his two crewmen for imminent ditching but rammed the throttle forward to gain as much speed as possible. The Skyraider lumbered off the end of the flight deck and fell toward the sea. Rogers retracted the gear and eased back on the stick as the engine worked feverishly. The “Guppy” thudded onto the water but bounced back into the air, sending up a pattern of salt spray! Rogers nursed the plane along the wave tops, gathering speed, and ultimately flew away to safety.

Aviation Electronicsman James Nesbit, in an AD-4N, felt a round of ground fire tear up through the bottom of his plane. The shell had penetrated the fuselage, pierced his parachute, setting it on fire, and then careened off his cartridge belt and was deflected out through the side of the aircraft. He survived with a great story to tell.

Lieutenant William L. Harris, Jr., on his first combat mission, made a dive-bombing run on a hydroelectric plant north of Hungnam. He didn’t realize he’d been hit until he returned to the ship. Maintenance personnel found fragments of concrete in the cowling and wings, verifying the accuracy of his bomb drops. Harris earned the nickname “Cement Mixer.”

Lieutenant (jg) Carl B. Austin recovered from a bombing run on a target near Kumson but was struck by a 37mm round. He saw a flash of brilliant light and felt the control stick whip out of his hand. He struggled to control the bird, noticing the fuselage, tail and canopy were riddled by shell fragments. The port aileron was blasted away. Somehow, the Skyraider held together until he landed safely on a friendly airstrip ashore. He got out of the airplane and observed shell fragments that had penetrated the canopy, grazed his neck and embedded themselves in his helmet. The next day he flew his repaired aircraft back to Princeton.

Lieutenant Commander Lynn DuTemple of VA-195 became known as “The Whistler” after he was hit during a bombing run on a railroad bridge near Hamhung in eastern North Korea. His canopy was hit by small arms fire, creating a pattern of cracked glass. He made it back to Princeton but as he banked toward the ship on final, landing signal officer Lt. Roy Farmer, heard a whistling sound that was of great concern to him. He thought, “I don’t know what his problem is, but if he gets to the blunt end, I’m gonna ‘cut’ him, anyway.” He did and the AD-4 settled into the gear normally. It turned out that a 37mm round, not small arms fire, had gone through one of the four propeller blades, producing a hole bigger than a softball before hitting the canopy. This created the sound.

Ens. William R. Videto completed a rail strike near Wonsan but took a 37-millimeter hit which went through the fuselage and exploded three feet behind his seat. After landing, mechanics counted 117 holes in the machine, ranging in size from miniature to as large as a basketball. Videto explained, “That shell had my name on it, but they had it misspelled.” 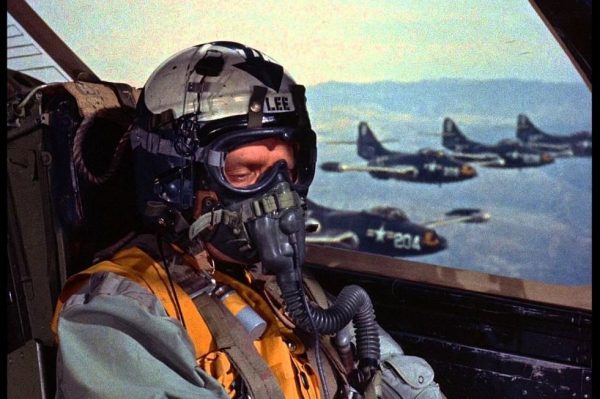 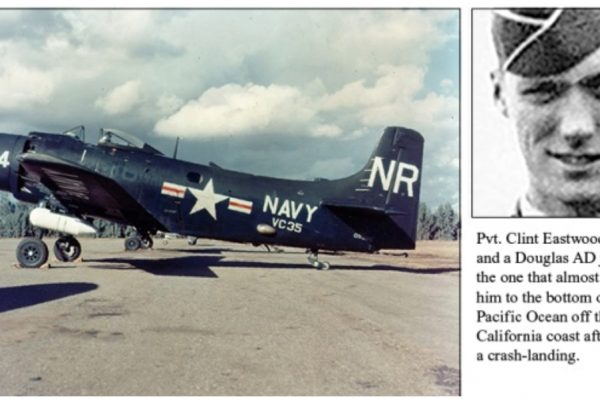