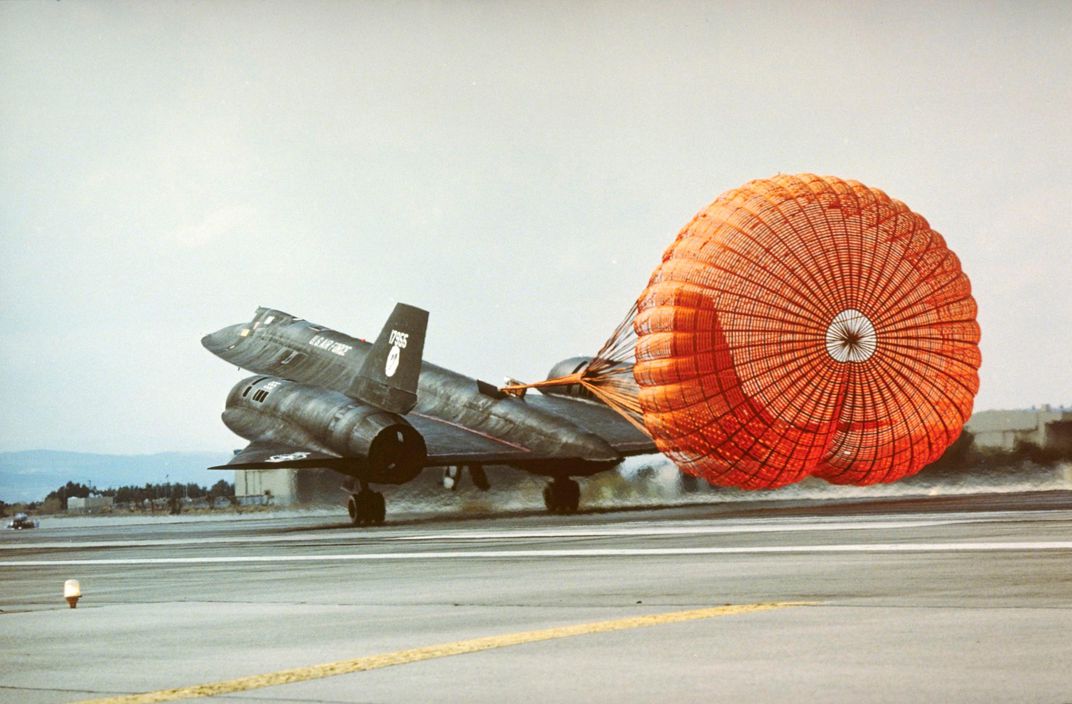 “With no forward visibility from the back seat, my RSO was looking through his viewsight and had picked up the sequence flashing lights beneath the aircraft. It was this bond, or trust I had with him that made me pull the throttle to idle and sit there until I felt the runway,” Former SR-71 pilot Lt. Col. Bernie Smith

Its incredible speed enabled it to gather intelligence in a matter of a few seconds while streaking across unfriendly skies. From 80,000 feet, it could survey 100,000 square miles of Earth’s surface per hour.

The most important skill being taught and evaluated in the simulator was how to cope with SR-71 emergencies and still be able to handle the aircraft safely – all at 33 miles per minute. Crews needed to fly the airplane, keeping it upright until they were subsonic and it began to handle like a regular aircraft. Both normal and emergency procedures required a high degree of crew coordination-pilot and RSO working closely together to identify and solve problems that developed. Crew coordination was the one area that tested the strengths and weakness of each crew to their limits. You could watching patience wearing thin, and personalities changing dramatically, as crews were confronted with demanding emergencies that had to be solved and rectified quickly.

In the following story, which appears in Col. Richard H. Graham’s book SR-71 Revealed: The Untold Story, former SR-71 pilot Lt. Col. Bernie Smith (Ret) discusses the importance of crew coordination and other factors that made SR-71 crews work as a team.

“There is no doubt in my mind that the crew coordination between the pilots and RSOs was one of the strongest contributions to [the SR-71’s] outstanding safety record. In the airline business this is called CRM, or cockpit resource management—the ability of a crew to function and communicate effectively in the cockpit.

The intense simulator program was the cornerstone of establishing crew coordination. Teaching a pilot to communicate the correct information to his RSO so that he could coordinate the right procedure was difficult but essential. As a simulator instructor taking a new crew through training, I was always amazed watching the crew transform from two separate individuals into one polished team.

This trust and bond between each other allowed two separate individuals, sitting in two separate cockpits, with two different roles, to perform like one individual in order to accomplish one very demanding job. This bond was a strong factor during an SR-71 emergency [Major] Eddie McKim and I had at night on December 22, 1982.

About one and a half hours into the mission while eastbound over Canada, we experienced a left generator failure. We selected Grand Forks AFB in South Dakota as the nearest suitable emergency recovery airfield. During the descent, a primary hydraulic system failed, indicating an accessory drive system (ADS) failure. An ADS failure in one of the most serious emergencies that can occur on the SR-71. Landing soon became imperative!

We dumped fuel to reduce our landing gross weight as we neared Grand Forks. The weather was deteriorating rapidly. It was now two hundred feet overcast, one-half mile visibility, and a slippery runway with freezing drizzle. During this emergency I flew the instrument landing system down to minimums; at minimums, where you should execute a missed approach if the runway environment is not in sight, the visibility was so bad I could not see anything.

Because there were no suitable alternate fields available and because we were low on fuel, the idea of a missed approach was not too exciting. I’ll never forget Ed’s words as I sat there at minimums staring into an opaque windshield: ‘I have the strobes in sight. You’re on centerline. Keep on coming.’ With no forward visibility from the back seat, he was looking through his viewsight and had picked up the sequence flashing lights beneath the aircraft. It was this bond, or trust I had with him that made me pull the throttle to idle and sit there until I felt the runway.”