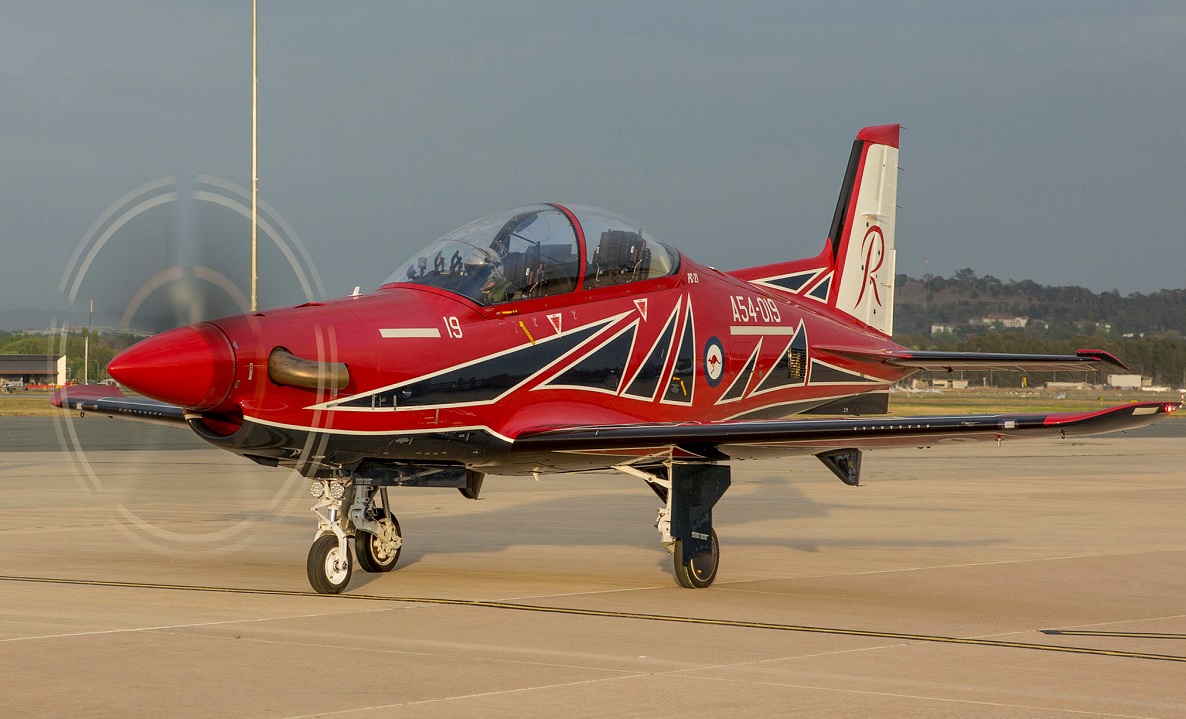 “The new colour scheme is a visually striking 21st Century image for the RAAF training aircraft and Roulettes, that is unique to the RAAF and Roulettes,” Christopher Pyne, Australian Minister for Defence

On Oct. 17, 2018, the Royal Australian Air Force (RAAF) has unveiled the new paint scheme for the Roulettes aerobatic team. The new scheme will be worn by the PC-21.

Minister for Defence, the Hon Christopher Pyne MP, and Minister for Defence Personnel, the Hon Darren Chester MP said in the media release that the Air Force selected a noticeably different colour scheme for the Roulettes, to clearly distinguish them from other aerobatic display teams.

“The new colour scheme is a visually striking 21st Century image for the RAAF training aircraft and Roulettes, that is unique to the RAAF and Roulettes,” Minister Pyne said.

“While pursuing a 21st century look, the new colour scheme retains the traditional colours of Air Force and the Australian National Flag, the Roulettes ‘R’ logo and incorporates the Southern Cross.”

Minister Pyne said the Pilatus PC-21 was the world’s most advanced pilot training aircraft and would replace RAAF’s current PC-9/A and CT-4B aircraft as part of the AIR 5428 project.

“The update to the Pilot Training System will deliver significant efficiencies and is key to a 5th generation Air Force.

“The new Pilot Training System will ensure undergraduate pilots develop the necessary knowledge and skills prior to progressing onto advanced military aircraft such as the F-35 Joint Strike Fighter, Armed Reconnaissance Helicopter and MH-60R Seahawk.”

Australia is acquiring 49 PC-21 aircraft and seven simulators, known as Flight Training Devices. To date, 22 PC-21 aircraft have been delivered to the Commonwealth and six simulators are either in use or undergoing installation – four at RAAF East Sale VIC and two at RAAF Pearce WA.

Minister for Defence Personnel Darren Chester said he was proud to unveil the colour scheme for the famous Roulettes aerobatic display team which is located in his Federal seat of Gippsland at RAAF Base East Sale.

“The Roulettes, have pride of place at RAAF Base East Sale,” Mr Chester said.

“The impressive skills demonstrated by our Roulette pilots have been witnessed by many at international events and in small country airshows and have inspired a generation of Airforce pilots since their first public display in 1970.”

“The new colour scheme will ensure that the Roulettes continue to be an important part of the RAAFs capability now and into the future.”

The Roulettes carry out breathtaking displays, using only hand-eye coordination to fly at speeds of up to 590 kilometres per hour and they can pull up to 4.5G (or 4.5 times the normal force of gravity) during their flying programme.