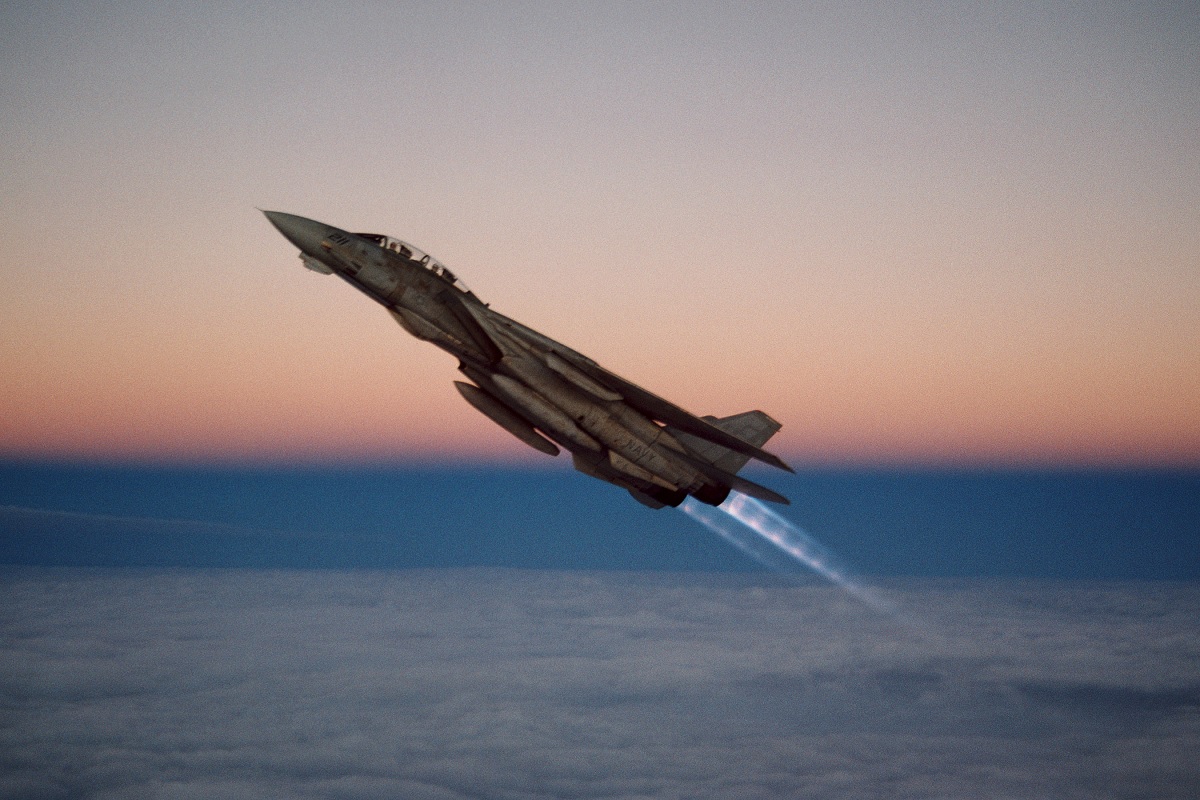 “I have to wonder what a fully-funded, fully-developed Tomcat would be like (…looks dreamily into space). I’m certain it would’ve had better reliability due to modern electronics and fewer compromises endured by early F-14As to save weight and cost,” Dave “Bio” Baranek, former F-14 Tomcat RIO

He served as an air-to-air combat instructor at the elite Topgun training program and in 1985, Bio had the unusual experience of flying aerial sequences used in the film “Top Gun,” starring Tom Cruise and produced by Jerry Bruckheimer and Don Simpson. He also served as a dialogue advisor on the project, and took some of the few available photographs of the movie’s black F-5 fighters in flight.

His third book, Tomcat RIO, was published in 2020 and tells this story and many flying stories from his career, as well as presenting dozens of his photos. It is printed on large paper (8 in x 10.5 in) so the photographs are bigger.

Recently The Aviation Geek Club asked its readers to submit questions about the F-14, the AIM-54 Phoenix and about how a Tomcat RIO could help his pilot during a dogfight. We chose the most interesting questions and we submitted them to Bio.

1. Why was the forward canopy made of flat faced glass vs curved glass? Did the forward support frame for the canopy cause any visibility problems, particularly during dogfights and landing?

The forward part of the canopy, known as the windshield, is flat for several reasons. One is that the head-up display (HUD) image was projected directly on the windshield in F-14A and F-14B. (The F-14D used a combining glass, the angled glass panel, for its HUD.) The other primary reason is lack of refraction and the most correct view of the ball for carrier landings. I’ve read this but could not find the source again for this interview. This concern is obviously not a problem on the Hornet and Super Hornet, which have one-piece windscreens, but I’m not sure how they “solved” it.

As for visibility in an engagement, the Tomcat was “good,” if not the best ever. The windshield frame and other items created some clutter, but it was better than many contemporary fighters, especially MiGs. This was something Topgun discussed and was seen through the experience of Constant Peg. Do a web search for “constant peg” if you’re not sure what that means.

2. Were the “glove vanes” effective? Was the standoff range of the Phoenix missile really 117 miles?

Well, this is two questions but they are good so I’ll answer both. First, the true purpose of the glove vanes might surprise some people: they were intended to REDUCE STABILITY at high speed, to paraphrase the NATOPS manual. Yes, reduce it, because at high speed with the wings swept the F-14 was too stable in pitch, which meant it couldn’t turn. The speeds I’m talking about are above Mach 1.35, which is where the computer-programmed deployment of glove vanes started. The glove vanes allowed the F-14 to meet performance requirements for supersonic maneuverability. The pilot could also deploy glove vanes at lower speeds. Were they effective? I think so, in their intended purpose. But did they have a _significant_ impact on F-14 performance? That’s debatable, because we rarely flew above Mach 1.35, and below that speed they just didn’t have much effect on aircraft performance. But the glove vanes also came out in “Bomb” mode on the wingsweep, so they helped stabilize the aircraft during high angle bomb runs. Also, they were deactivated and then deleted, so the Navy and Grumman considered them “expendable.”

As for the Phoenix standoff range: yes, around 110 miles. To delve into it more, it’s important to note that a value like this would be the range from F-14 to target at time of launch. The missile wouldn’t fly that far: assuming both the target and fighter continued towards each other, the missile would actually travel a somewhat less distance. To obtain successful launch indication at a long range like this was dependent on intercept geometry, and then for an intercept the target had to continue without significant maneuvering. Note: I’m basing my comments on information that has been publicly released.

3. What kind of tactical maneuvers can a Tomcat do against a fighter like F/A-18 or something similar?

The Hornet and Super Hornet would be challenging opponents in an engagement. As a baseline initial move, the Tomcat can make a hard turn toward the opponent to force the fight one-circle, and ensure it flies nose-low to sustain energy. The Tomcat attempts to get a quick kill using guns or short-range AIM-9, or at least keep the pressure on the opponent if it did not get the kill.

The Tomcat should preserve its energy and be ready to maneuver out-of-plane based on opportunities to maneuver for a valid missile or gun shot. In addition, the Tomcat should attempt to drag the engagement to a lower altitude, if the training rules allow or it’s a real engagement (DCS reality), because the F-14 benefits more from thicker air at lower altitude than some other aircraft.

To shift to the big picture: some very capable fighters came along after the Tomcat and their designs include good capability for close-in maneuvering – but of course they can’t match other areas where the Tomcat weapons system was superior.

4. Are there any stories of pilots flying so extreme causing their RIO to get sick?

I’m sure there are some, but I don’t recall hearing about this when I was in fleet squadrons. Over the course of my career I flew with one or two pilots who were rough on the controls, out of many dozens who were standard-Navy-fighter-pilot-smooth. But by the time a RIO got to the fleet he should be able to handle almost anything without getting sick! People who had persistent airsickness would be transferred out of the fighter pipeline during training.

In my personal experience, I got airsick on my first 2 flights in T-2 Buckeyes in Pensacola when we did mild maneuvering, but I started to feel better as I got more experience. I remember the feeling of relief being in the fleet and not getting airsick under any conditions.

5. How hard is it to maintain your equilibrium when the pilot is doing hard and fast maneuvers that you may not be expecting?

Good question! Once again I can talk about my personal experience. When I arrived at my first fleet squadron, VF-24, my first flight was a hard-maneuvering flight on a simulated surface to air missile (SAM) range, the Echo Range at China Lake, California. Remember how I said I didn’t get airsick in the fleet? Well, during the hard maneuvering I felt like I might, and I was pretty disoriented. Not good for a combat-qualified RIO! Luckily, with a steady program of dynamic flights I quickly got a solid “air sense” and soon had no trouble being fully comfortable in any maneuvering environment. After 3 ½ years in the fleet I started my tour as a Topgun instructor and found that I was able to keep good SA (situational awareness) on multiple aircraft in very dynamic environments.

6. How much better was the F110 engine then the original?

Sea level static thrust. The F110 was rated at 23,400 lb per engine, according to the Wikipedia article on the engine, while the TF30 was actually down-rated to 17,000 lb according to the F-14A NATOPS manual. Most enthusiast books still show the TF30 as 20,000 lb per engine, but that was an early version; the reduced thrust contributed to less problem with stalls and longer engine life. It’s worth noting that both engines benefitted from airspeed: “The F110-GE-400 engine produced 23,400 lbf (104 kN) of thrust with afterburner at sea level, which rose to 30,200 lbf (134 kN) at Mach 0.9” — according to the F-14D NATOPS as quoted on Wikipedia. The TF30 would also have higher thrust with speed but I can’t quantify it.

Compressor stalls. One of the better-known flaws of the TF30 was excessive tendency for compressor stalls, which is not good in a fighter engine. The F110 remedied this problem. Once again referring to my personal experience, in 2,500 flight hours I had very few compressor stalls – and I had a LOT of hard ACM engagements. So compressor stalls didn’t happen all the time, but they happened more often than they should, and at a bad time: often during an ACM engagement. One reason compressor stalls were bad in an F-14 is that the thrust centerline was about 5 feet from aircraft centerline, so if one engine lost thrust due to a compressor stall and the other was at max burner, it could produce a significant yaw. The stalls I’m talking about were stalls when the engine was at high power; they usually resulted in loss of engine power and could even result in engine damage. This is a good time to note that there were other types of stalls: some would self-clear almost immediately, some were difficult for the aircrew to detect.

I’ve read other good things about the F110, such as ability to cruise supersonic under some conditions and even more time on station. On the other hand, some pilots defend the TF30 as a good engine in the mid-airspeed regime common to dogfighting, so it wasn’t all bad.

7. Do you think the Navy made the right decision by retiring the Tomcat in 2006? We see the Hornet, Viper and Eagle all getting upgrades and continuing on despite the implementation of the F-22 and F-35 programs. Should we have purchased more F-14D models, or ask for an upgraded E model?

This is a potentially emotional question, because there is a lot of enthusiasm for the F-14. I like your point about those other fighters being upgraded, because on one level it bugged me that we flew A-model Tomcats in VF-211 when I was CO (1997-98), while the other ”Teen Fighters” were flying upgraded C-models. But our junior officers were enthusiastic and confident about flying F-14As, and life was good.

To be analytical about it, we’ve gone more than 14 years since the US Navy retired its last Tomcats and nothing bad has happened, so it looks like the decision wasn’t a major error. The Super Hornet is a versatile and capable aircraft, and the latest versions of the AIM-120 have impressive range as well as many other improvements. As an American citizen and taxpayer, I hope the Super Hornet weapons system is up to all challenges.

But I have to wonder what a fully-funded, fully-developed Tomcat would be like (…looks dreamily into space). I’m certain it would’ve had better reliability due to modern electronics and fewer compromises endured by early F-14As to save weight and cost. As for upgrades to engines, avionics, and all other systems, the resultant aircraft would’ve been mid-boggling.

That’s all for now, stay tuned for part 2!

Note: Bio would like to thank Jon “Hooter” Schreiber and David “HeyJoe” Parsons for their assistance. 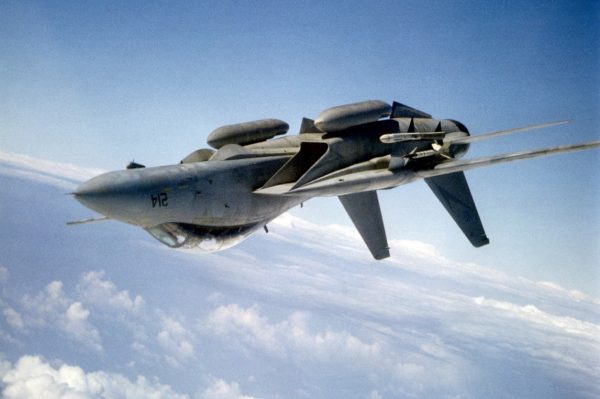 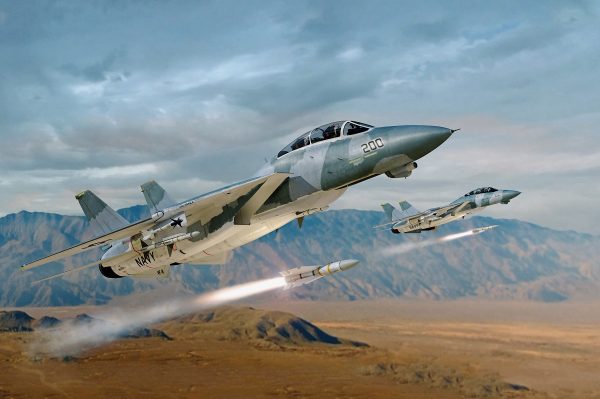 Launching the Phoenix and dogfighting against the F-15: Q & A with F-14 Tomcat RIO Dave “Bio” Baranek Part 2