The decision to buy the F-15X comes from the Pentagon’s top leadership and not the U.S. Air Force

According to Bloomberg the Pentagon will request $1.2 billion for 12 Boeing F-15Xs in the fiscal year 2020 budget.

Sources familiar with the decision who asked not to be named because it’s not yet official, told the business news that the jets will replace aging F-15Cs in service with the Air National Guard which have become too expensive to overhaul. Production of the F-15Cs ended in the 1980s.

The decision to buy the F-15X comes from the Pentagon’s top leadership, including with some prodding from Deputy Secretary of Defense Pat Shanahan, and not the U.S. Air Force (USAF), which would be flying the planes, the two people said. Shanahan, a former Boeing Co. executive, recused himself from any decisions related to Boeing when he was confirmed by the Senate.

But an administration official, who asked not to be named, said Shanahan doesn’t make decisions on Boeing programs. The official wouldn’t confirm the budget request, and none of the budget decisions are final until the Pentagon submits its request on Feb. 4., 2019

Boeing builds the F-15 in St. Louis, where it also builds the Super Hornets, an aircraft that has benefited from congressional largesse over the last several years.

As we have already explained, the F-15X will carry more than two dozen air-to-air missiles and has modern flight controls, cockpit displays, and radar.

American allies Israel, Saudi Arabia, Singapore, and South Korea fly tailored versions of the F-15. The newest member of the Eagle club is Qatar, which ordered 36 aircraft last year and has an option for 36 more. Boeing is also pitching the F-15 to Germany, which wants to replace its Tornado jets.

The F-15 was supposed to be replaced the by the stealthy F-22 Raptor — considered the top air-to-air combat fighter. But despite objections from top Air Force generals, the F-22 production ended in 2009 with the final Raptor coming off of Lockheed Martin’s Marietta, Georgia, production line in 2012. In all, the USAF purchased 187 F-22s, far less than the more than 750 originally planned.

Foreign versions of the F-15 have received newer technology not around when the American planes were built.

At times, Boeing has argued that upgraded versions of their planes could come close to matching the advanced stealth, sensors and electronic warfare capabilities of the F-35 at a fraction of the cost. 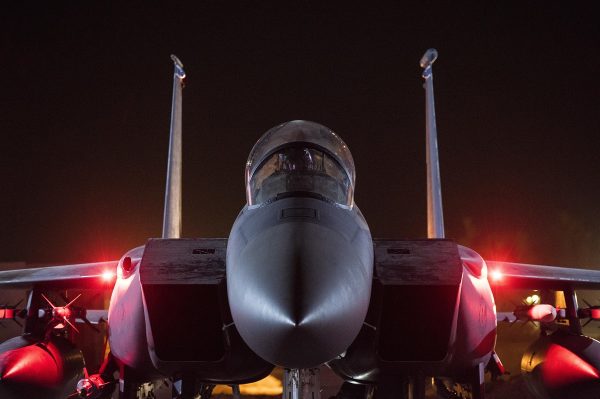