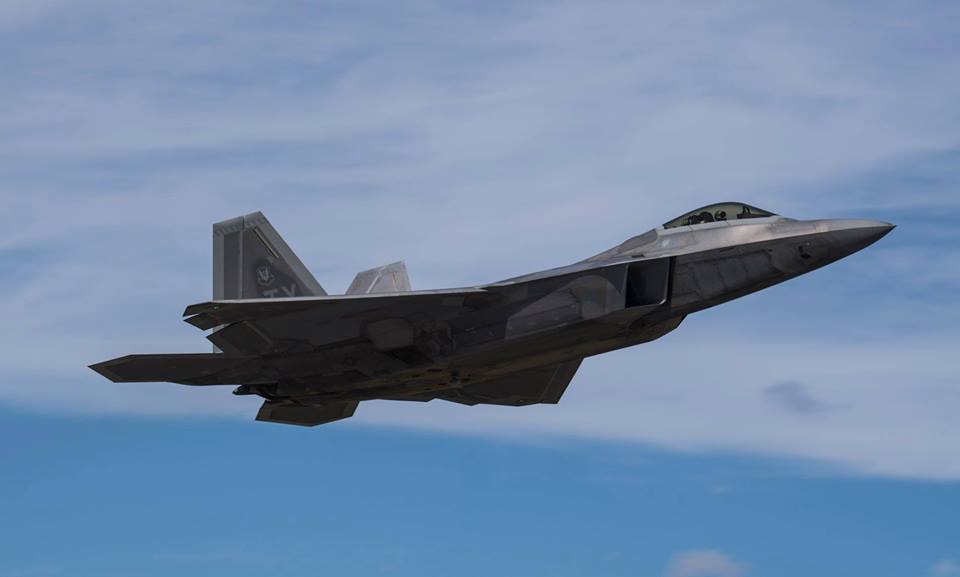 The final F-22s will leave Tyndall for more in-depth assessment and maintenance at Langley by Nov. 6

The most badly damaged F-22s are now flyable and will leave Tyndall Air Force Base (AFB) by Nov. 6, 2018 as more than 1,300 airmen work to bring Tyndall back from the brink following Hurricane Michael.

As reported by Air Force Magazine, seventeen F-22s remained at Tyndall as one of the most powerful storms in history ripped through the base on Oct. 10, 2018 with many officials here initially thinking there was no way Tyndall could come back from the blow. More than 95 percent of buildings on the base were in fact damaged. The 325th Fighter Wing (FW) Commander Col. Brian Laidlaw told Air Force Magazine during a visit to the base this week that the damage was “surreal.”

Initial reports focused on the Raptors that remained, many of which rode out the storm in Hangar 5 on the East end of the flight line, which lost its roof in the storm. U.S. Air Force (USAF) officials originally feared some of the Raptors might not fly again, but the service brought in experts and “methodically” removed the aircraft from their hangars. Airmen built three inflatable temporary hangars directly on the flight line, and the F-22s were towed there for assessment. Two F-22s took off for JB Langley-Eustis, Va., on Tuesday afternoon while two more Raptors were in separate hangars at Tyndall and one more on the flight line Wednesday morning.

According to Laidlaw although a minor storm was bearing down on the base Wednesday, bringing rain, limited winds, and slowing plans, the final Raptors will leave Tyndall for more in-depth assessment and maintenance at Langley in a matter of days, not weeks.

On Oct. 31, 2018 focus shifted to the rest of the aircraft in the damaged hangar five. T-38s, used as adversary aircraft, were pulled down the flight line by trucks to a separate hangar for assessment. However Laidlaw said it is too early to determine the extent of damage to the T-38s or other aircraft, including QF-16 targeting drones and Twin Otter aircraft, until the hangar is cleared and a more detailed assessment is made.

Nevertheless this progress is a far cry from initial reports and pictures, which showed the roof of hangars fallen onto F-22s and other aircraft. 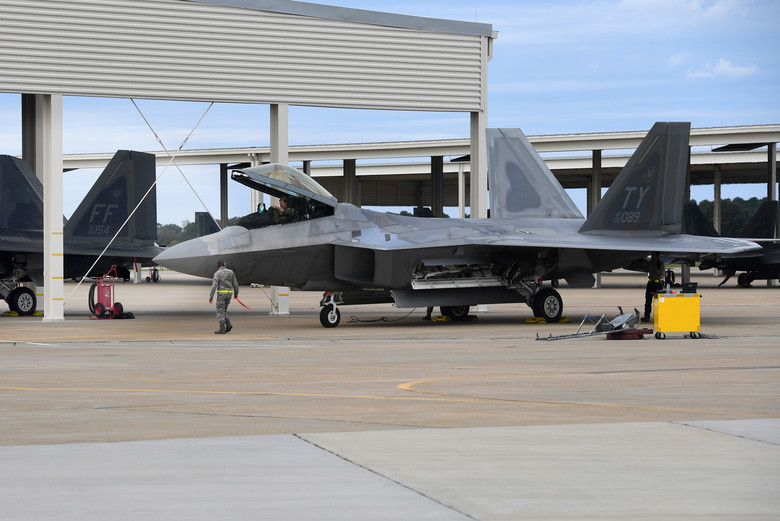 The days after the storm in fact a message from someone identifying themselves as a member of the 43rd Fighter Squadron appeared on a Facebook page called Air Force Forum. “Four 43d F-22s were left behind to ride out the hurricane,” the anonymous poster wrote. “One of them was scheduled to leave but GABed [ground aborted] after an issue prior to taxi. The other three were jets that couldn’t be spun up in time to fly.” He pointed out that two had been cannibalized for parts and the others had “issues that couldn’t be fixed. They were in hangars that [they] are usually put in according to hurricane plans.”

Debris, once scattered everywhere on streets and the flight line, now sits in large piles across the base. Many of the 1,300 airmen who are assessing buildings and bringing basic services back to the base are housed in dozens of tents.

A small temporary tower sits directly off the runway directing the F-22s out and bringing in airlift aircraft carrying airmen, food, tents, vehicles, and other supplies since Tyndall’s air traffic control tower, while largely intact, had its windows blown out and received water damage.

Vice President Mike Pence and Secretary of the Air Force Heather Wilson visited the base and they announced that Tyndall’s F-22 training mission and the 601st Air Operations Center would be back up and running by the beginning of the year. Laidlaw said he is working to determine the capacity available to meet that goal by doing everything possible to keep as much of the key infrastructure available.

“The way I see my role as installation commander is to, as smartly as possible, put Band-Aids on every window we can to keep as much in the decision space as possible,” Laidlaw said.

Tyndall has eight full-mission simulators for the F-22 school house, and the building housing those simulators was slightly damaged. There is still work to do, but they should be up and running by the timeline provided by Pence. F-22s will move to nearby Eglin AFB, Fla., for the flying portion of training. 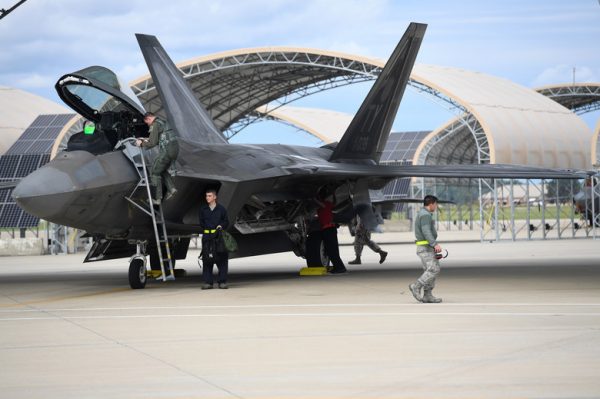