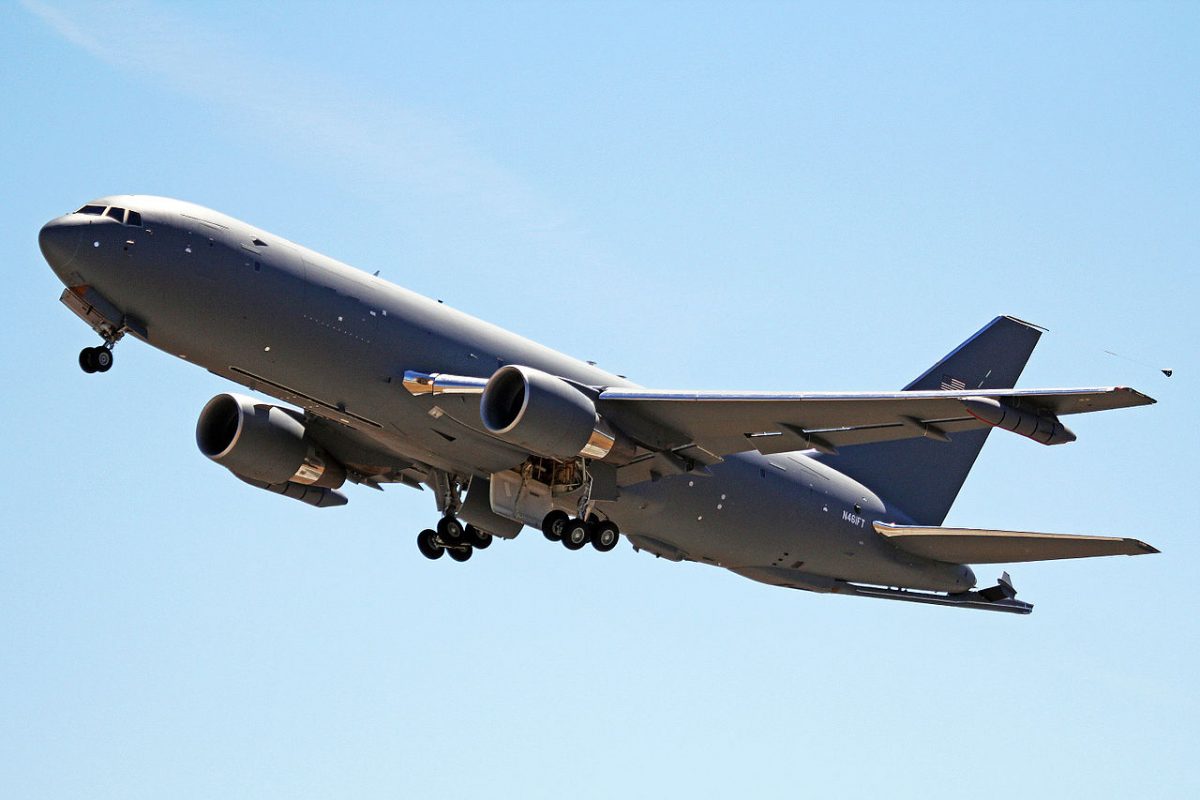 The first global circumnavigation for the KC-46A Pegasus provided extensive training opportunities for maintainers and aircrew at multiple locations on a seven-leg, 13-day journey.

A KC-46A Pegasus crew belonging to 22nd Air Refueling Wing from McConnell Air Force Base (AFB) completed the aircraft’s first flight around the world on Nov. 26, 2019.

The first global circumnavigation for the KC-46A Pegasus provided extensive training opportunities for maintainers and aircrew at multiple locations on a seven-leg, 13-day journey that included its debut at the 2019 Dubai Air Show, or DAS.

As explained by 2nd Lt. Kaitlyn Danner, 22nd Air Refueling Wing Public Affairs, in the article KC-46A Pegasus completes first around-the-world flight, KC-46A crews are currently conducting operational testing and evaluation as they prepare the aircraft to serve as the next generation air refueling platform for the Air Force. The global mission was an important milestone, offering an opportunity for allies and partners to see firsthand one of the Air Force’s newest weapon systems and hear the unique perspectives of those who operate and maintain the KC-46A.

“Our operators and maintainers had the privilege of circumnavigating the globe in the Air Force’s newest and most capable air refueling platform,” said Col. Thad Middleton, 22nd Operations Group commander and subject matter expert for the flight. “We have worked with our partners at the Tanker Airlift Control Center on previous overseas missions, but our movement across the Atlantic, Indian Ocean and the South Pacific allowed us to truly flex the system. It goes without saying, but the crew members gained invaluable training in terms of oceanic procedures, unfamiliar airfield operations and dynamic mission planning.”

After a quick stop at RAF Mildenhall, United Kingdom, the support team of 14 Airmen traveled to the United Arab Emirates to show off the Air Force’s newest weapon system as a static display in the 2019 DAS.

Debuting key aircraft such as the KC-46A allows the Air Force to promote regional U.S. national security objectives, showcase U.S. military hardware to partners in the region and demonstrate contributions to regional stability.

During the airshow itself, the McConnell AFB Airmen shared their experiences on the KC-46 with airshow visitors and interested partners.

The DAS, considered the premier aviation and air industry event in the Middle East, featured 161 aircraft from around the world, 1,288 exhibitors and resulted in over $54 billion in aviation-related deals. The U.S. military presence included nine airframes and more than 300 personnel, up from the 250 personnel present at the 2017 DAS.

The four subsequent stops following the DAS were each brief, yet meaningful. Each time the KC-46A landed for the first time at a distant airfield, it offered an opportunity for airfield personnel, maintainers and other aircrews to gain hands-on experience with the future of Air Force aerial refueling.

“Our quick-turn times at locations that have never before supported a KC-46 showcased our ability to work as a team across the globe,” said Staff Sgt. Jeffery Dubose, a supporting maintainer on the KC-46A. “We introduced the world to the KC-46 and the McConnell (AFB) Airmen that make it happen.”

Following the airshow, the Pegasus traveled north to Al Udeid Air Base, Qatar, where the crew hosted senior leaders and members of the Qatari military for a familiarization flight to demonstrate the aircraft capabilities to an interested partner.

The KC-46 visit provided a hands-on opportunity to further strengthen relationships in the region, while showcasing the capabilities of the Pegasus and an opportunity for increased interoperability with Al Udeid’s Qatari hosts.

“It is critical we show our partners we are not only capable, but committed to being present,” Middleton said. “It is also important to emphasize interoperability opportunities in the future of air refueling and offer greater understanding of core capabilities.”

The KC-46’s global mission continued on to Naval Support Facility Diego Garcia, located in the Indian Ocean on a small British Indian Ocean Territory atoll. Having repeatedly served as a strategic operating location for U.S. bombers, fighters and tankers during past operations, the Pegasus’ stop at the tiny atoll offered a familiarization opportunity for both the McConnell AFB crew and Air Mobility Command personnel assigned there who support and service transiting aircraft.

Before taking off, Diego Garcia emergency service professionals on the flightline spoke to Master Sgt. Jeremy Pratt, KC-46 boom operator, about egress locations on the aircraft. Pratt explained that visits like the one to Diego Garcia provide invaluable familiarization training to personnel likely to assist in the event of an emergency. At most stops throughout the two-week mission, emergency service professionals sought tours from the crew to familiarize themselves.

“If we have a ground emergency, first responders will be rushing to the plane to help us,” Pratt said. “As we go to new locations with the KC-46, we want to make sure the airfield’s emergency personnel are very familiar with the aircraft in case the worst happens.”

From Diego Garcia, the KC-46 flew onto Andersen Air Force Base, Guam, and made its final stop at Joint Base Pearl Harbor-Hickam, Hawaii, before heading home to McConnell AFB.

The Total Force team of maintainers and operators worked tirelessly to ensure aircraft readiness at each en-route stop.

Master Sgt. John Grindstaff, crew chief and a member of the 931st Reserve Air Refueling Wing at McConnell AFB, represented the effective partnership between active and Reserve units involved in the mission.

“Total Force manning is how we work on the flightline daily so missions like this work the same,” Grindstaff said.

The journey was also a unique training experience for KC-46A operators, like Capt. John Rush, who proudly showcased the progress being made at integrating the KC-46A into the Air Force’s refueling and mobility operations.

“As operators, we care about the mission and the mission of the KC-46 goes beyond aerial refueling,” Rush said. “Whether it’s gas, cargo or people, we want the world to know that the Pegasus is going to play an invaluable role for the U.S. and its allies and partners.”

While the KC-46A’s first global flight offered many significant firsts, for the crew, it was just another opportunity to represent the Air Force, AMC and McConnell AFB to the world.

“Missions like this are instrumental in helping our Airmen work through the challenges we’ve experienced with the KC-46 program,” said Col. Richard Tanner, 22nd Air Refueling Wing commander. “The operational experience our crews gained during this around-the-globe trip will pay long-term dividends as the Pegasus becomes a significant portion of our Air Force’s future tanker fleet.”