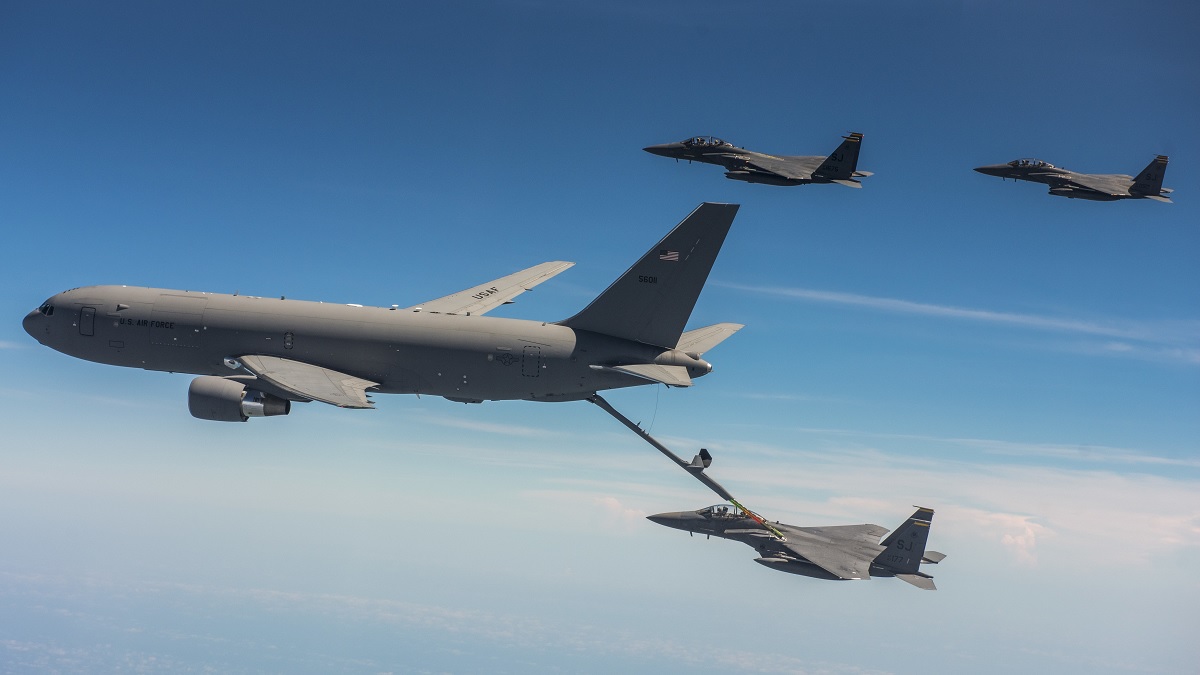 In the last 12 months, the KC-46A Pegasus tanker demonstrated growing operational capacity at a swift pace, despite restrictions and deficiencies.

“Credible and reliable KC-46A tanker capability is now available to our joint and international partners. Let’s go,” Minihan said. “In May 2021, the KC-46A was not cleared to operationally support any USTRANSCOM missions.”

ICR: A year in review

The first ICR approving the Centerline Drogue System mission set was released on Jul. 9, 2021. In the last 12 months, the KC-46A demonstrated growing operational capacity at a swift pace, despite restrictions and deficiencies.

The second ICR milestone was approved on Aug. 5, 2021, marking the first ICR decision for the air refueling boom mission set. This allowed USTRANSCOM to task the KC-46A to support the C-17 Globemaster III, B-52H Stratofortress and other KC-46A receivers.

“In the initial ICR plan, the first boom mission set release was estimated for May 2022,” said Brig. Gen. Ryan Samuelson, KC-46A Cross Functional Team lead. “Instead, data and dedicated operational squadrons focused on safely executing the mission drove the decision forward nine months, enabling the aircraft and crews to accept operational missions that would otherwise be filled by busy KC-135s and KC-10s. Simply put, the wings said ‘we have system deficiencies, but we got this’ and they delivered.”

On Oct. 13, 2021, Minihan approved the third ICR. This decision allowed the KC-46A to refuel all variants of the F-15 Eagle and F-16 Fighting Falcon during USTRANSCOM-tasked missions. At that time, the KC-46A could support 62 percent of all receiver aircraft that requested air refueling support from USTRANSCOM.

Early in 2022, operational and test data demonstrated the aircraft was capable of supporting nearly 85% of USTRANSCOM air refueling taskings. In response, Minihan approved the fifth ICR Feb. 22, 2022, allowing refueling with the F-35A Lightning II and F-22 Raptor. The decision also released the KC-46A to support a variety of alert missions. The sixth ICR allowed the aircraft to be utilized in a both passenger movement and aeromedical evacuation missions.

In addition to ICR approvals, another major milestone for the KC-46A program occurred on Apr. 18, when a Pegasus refueled Spanish EF-18 Hornets, known in Spain as C-15s, during the Pegasus’ first Employment Concept Exercise, ECE 22-03, at Moron Air Base, Spain.

“This mission marked the first operational refueling of an international receiver for the KC-46A, paving the way for stronger interoperability with allies and partners,” said Lt. Col. Joshua Renfro, KC-46A Cross Functional Team deputy lead. “Following a decision to approve Canadian and Spanish F-18s in early 2022, this ICR adds five more nations to the list of approved international receivers, including Finland, Italy, Australia, Malaysia, and Switzerland.”

Employment Concept Exercises, a subset of the KC-46A ICR plan, allow AMC to employ the KC-46A in different scenarios. Some of those scenarios include Red Flag, Green Flag, overseas operations, and combatant command exercises for further operational employment and evaluation and seasoning of the KC-46A enterprise.

Notably, ECE 22-03 also demonstrated the reliability of the platform. In Europe, the aircraft operated at a 98% maintenance reliability rate for a month and a half.

“The KC-46A, its aircrews, maintenance and support personnel performed magnificently over those seven weeks in Spain,” Minihan said. “They pushed hard to run the aircraft through its paces during the ECE, including supporting a bomber task force, refueling U.S. fighters over Eastern Europe, and completing the first-ever operational refueling of an international aircraft. AMC continues to drive toward increased refueling capability while working to overcome programmatic challenges.”

Along with ICR decisions to increase KC-46A operational capability, the wings continue to explore the KC-46A’s capability and operational capacity, as McConnell AFB’s 22nd Air Refueling Wing demonstrated May 5-6 when they completed a 24.2-hour flight on the KC-46A, breaking the record for AMC’s longest duration flight in history.

During its full day airborne, the McConnell AFB KC-46A performed dry contacts with another McConnell KC-46A, refueled four Marine F-35Bs, and was refueled by another McConnell AFB-based KC-46A. The flight also collected crucial data on the human, machine, and mission capabilities of aerial refueling; the data will be used to determine the feasibility, limitations, potential risks, and unique benefits the KC-46A brings to the table for long-duration flights.

With more than 40,000 air refueling contacts with a multitude of joint force and international partners and allies receivers since the US Air Force accepted delivery of the first aircraft in January 2019, the KC-46A is connecting and projecting the Joint Force to meet worldwide global mission demands.

The aircraft has been in development since Feb. 24, 2011, and its initial flight occurred in Dec. 2014. The current contract, with options, provides Air Mobility Command an inventory of 179 KC-46A tankers. 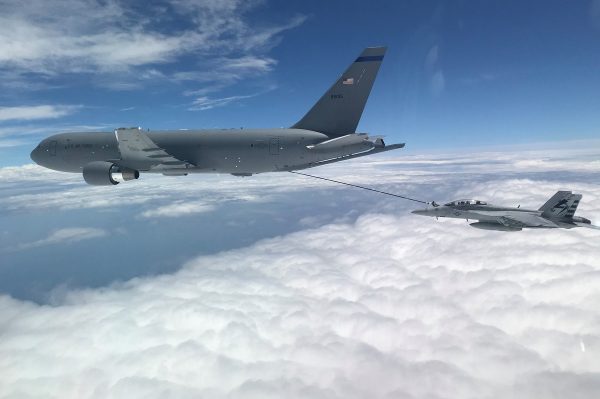