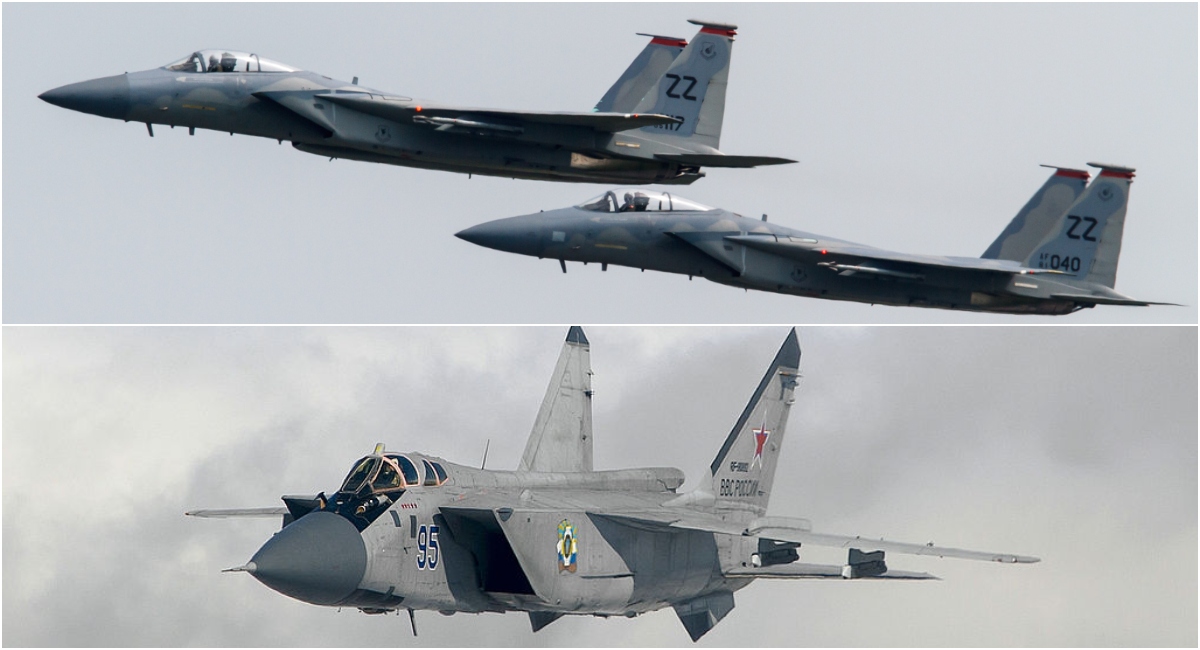 Even if the wreckage of KAL 007 had fallen into international waters within the Sea of Japan, Kadena’s F-15C Eagles had to protect P-3s that were searching for the airliner’s black box data- and voice-recorders from marauding Soviet fighters

The F-15 Eagle is an all-weather, extremely maneuverable, tactical fighter designed to permit the U.S. Air Force (USAF) to gain and maintain air supremacy over the battlefield. The improved variant of the F-15A, the single-seat F-15C entered the USAF inventory beginning in 1979.

As the world anticipated the worst possible news, U.S. intelligence agencies already knew what had happened to the airliner. It had been shot down by a Soviet Su-15 interceptor after straying off course and overflying Sakhalin Island. None of the 269 passengers and crew on board the airliner survived.

As told by Steve Davies in his book F-15C Eagle Units In Combat, highly classified intercepts had recorded a Soviet ground controller directing a fighter to intercept the 747 after it had accidentally strayed into sovereign Soviet airspace. Believing that it might be a USAF RC-135 Rivet Joint, the pilot had been vectored to within very close proximity of KAL 007. He had radioed back that the contact was not a reconnaissance aircraft but a civil airliner, and he was then instructed to shoot it down – no warnings were issued to the crew, despite the Soviets later claiming that they had.

A race began to be the first to recover airliner’s black box data- and voice-recorders from the scene of the crash. At this early stage, the U.S. saw these as key to disproving Soviet claims that they had thought the aircraft was a reconnaissance platform flying without its lights on, and that the fighter which eventually shot it down had fired warning shots past the cockpit windows. Recovery of data from the black box was important because the classified radio intercepts could not be publicly disclosed until much later due to the covert way in which they had been obtained. The data recorders were the only means of unequivocally establishing the events of that night.

Unarmed U.S. Navy P-3C Orion patrol aircraft from Patrol Squadron Four (VP-4) and from Patrol Squadron Forty (VP-40) took part to the U.S. effort to locate the recorders. Even if the wreckage of KAL 007 had fallen into international waters within the Sea of Japan, the P-3s needed protection from marauding Soviet fighters. Select 12th TFS pilots were deployed with their F-15Cs to Misawa AB, on the tip of Honshu Island. Misawa in fact was just 200 miles from Soviet-controlled Sakhalin Island, where U.S. Military intelligence estimated the airliner had been engaged.

Lt Rob Graeter was one of those selected to man the alert F-15s at Misawa. He recalled: “We had a south CAP (Combat Air Patrol) and a north CAP. The southern CAP was abeam and to the west of Sapporo, on the northern island of Hokkaido. The north CAP was about 80 miles from the search area, and was closer to the tip of Hokkaido. We were flying with three ‘bags’ (fuel tanks) and eight missiles (four AIM-9Ls and four AIM-7Fs), so we were not going to go any faster than Mach 1.1. What that meant was that we were about 20 minutes’ flying time away from the northern CAP – maybe a little less if we really pushed it.”

There were ample F-15 and aerial tanker assets in the area to allow the Eagles to maintain a 24-hour airborne presence closer to the crash scene (Kadena was home to three fully equipped Eagle squadrons), but as explained by Davies political tensions were deemed to be so strained that such a move would have been seen as provocative. Instead, the pilots and their six Eagles stood 24-hour alerts, waiting for the order to launch in response to hostile or threatening Soviet behaviour.

Noteworthy the Soviets hastily mobilised their own assets to recover the recorders, the search for which was centred southeast of Sakhalin. There were three Soviet fighter bases on the island – Smirynkh, Dolinsk-Sokol, and Yuznho-Sakhalinsk – which were home to MiG-21s, MiG-23s and long range MiG-31 ‘Foxhounds’ (the latter was a derivative of the MiG-25 ‘Foxbat’). The ‘Foxhound’ posed the greatest concern, and, as already happened years earlier for the Foxbat, the USAF was once again unsure of how to deal with it. The MiG-31 in fact had only recently introduced to service, and was still largely enigmatic.

Then a junior lieutenant on his first F-15 assignment, Graeter remembers: “The MiG-31s had just deployed to Yuznho-Sakhalinsk, and we had intelligence reports telling us that one had made a run from Vladivostok to Sakhalin at 70,000 ft and Mach 2.3. They told us that his load out was two radar missiles and four infrared (IR) missiles. It was pretty eye-opening to know that he had enough gas to make that run and carry his missiles.”

As U.S. Navy Orions combed the sea for any sign of the 747’s black boxes, they came under increasing harassment from Soviet MiG-23s. Indeed, one pilot was so aggressive that he bumped wings with the unarmed aircraft. This, coupled with reports that bodies from the airliner were beginning to wash up on the beaches of outlying Japanese islands, was the final straw. On the third day of the search, as the P-3s made their way to the debris field, a MiG was detected launching.

In response, Graeter and his CO, Roger Taylor, were scrambled. “We started talking to AWACS and quickly detected a MiG-31 heading away from us and running northeast to southwest – Sakhalin to Vladivostok – probably 90 miles away. We climbed up in altitude in order to prepare to do something about him should he turn around and head towards the AWACS, which was northwest of Misawa.”

But the Foxhound passed to the east without incident. The high-altitude, high-speed threat posed by the MiG-25 and MiG-31 required the employment of special tactics if they were to be dealt with effectively. Graeter explained: “We had trained for the high-fast-flyer threat (MiG-25) and knew that to handle that guy we’d have to dump all of our fuel tanks. We would fly a profile that involved getting to 40,000 ft, then unload the jet (pushing forward on the stick to induce 0g) in full afterburner to get it accelerate. Once up to Mach 1.7 or so, we’d gingerly pull the nose back up to 20-30 degrees, centre up the dot on the AIM-7 (align the nose with the computer-generated steering dot) and salvo all four missiles.”

It never came to that, though. According to Davies, Graeter and his colleagues launched a total of 12 sorties in the days that followed, and the sequence of events was always the same – the P-3s would roll back aways from the MiGs, the F-15s would launch, the MiGs would be advised that Eagles were airborne, and they would immediately turn 180 degrees and head for home. The USAF pilots could see the ‘Floggers’, ‘Fishbeds’ and ‘Foxhounds’ on radar, often less than 80 miles distant, but AWACS always denied them permission to engage. Within a week the Soviets stopped harassing the recovery force, and within six weeks the Eagles had returned home.

Although not a single shot had been fired, the F-15 had intimidated the Soviet fighter presence into submission. America’s Eagles had passed their first test. 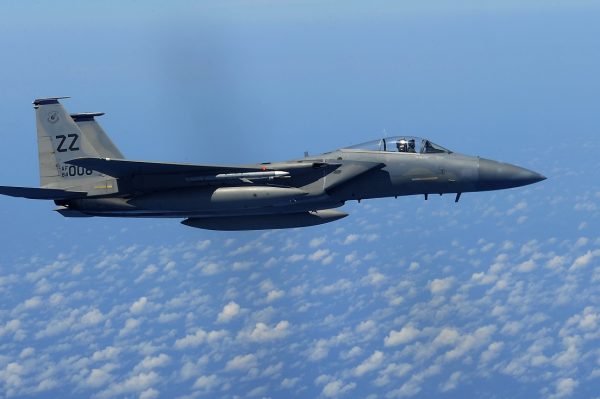 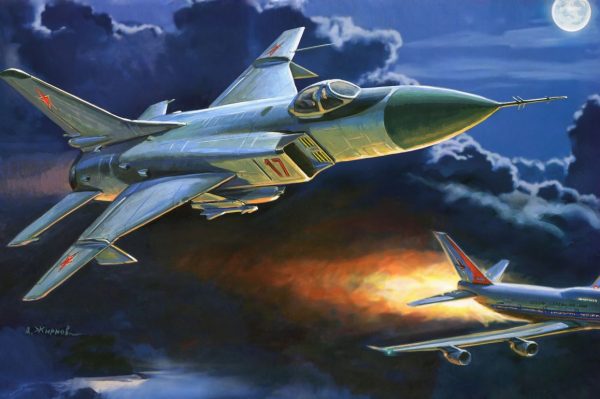 The mysteries behind KAL 007 shooting down: the night Soviet Su-15 fighters shot down a Korean Air Lines Boeing 747 over Sakhalin Island